SYRIANGIRL participating at the prestigious ‘Central Peace Policy’ conference in Eschwege, Germany in 2016

Last Thursday, we were the first to report that the Syrian/Australian YouTuber and activist, SYRIANGIRL, had her entire Facebook account suspended without warning.

It had 75,000 followers and she had built it up over 5 years. I spoke with her the next day in an exclusive interview.

That day she put a video on her excellent Youtube channel (73,000 subscribers, 5 yrs old, 5 million views) arguing that this was absurd.

Well, now, YouTube has removed that video, claiming that it is ‘hate speech’, and threatening to shut down her whole channel. To protect herself from another ‘community guideline violation’, which could lead to all her videos being deleted, she has made all of the videos on the channel ‘private’, unavailable to the public – so now her YouTube channel is effectively silenced too. 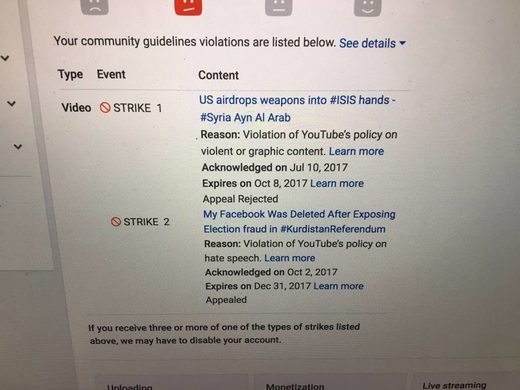 SYRIANGIRL sent it from her Youtube account, note reason given for removal of 2nd video – ‘hate speech’

As you can see, she is on the verge of having her account shut down.

To stick it in Facebook’s eye a little, we uploaded her video to our Facebook page. So far it has 28,000 views there, and the comments are scathing, against Facebook. Please share it, and this article, around – we need to get the word out on this.

Here’s the video: (See end of this article for a full transcript – as you will see, no hate at all)

Clearly this is a travesty – there is nothing in this video that even remotely warrants being censored on Youtube. There is more actual, real hate speech in an average Rachel Maddow rant than in this video.

This is one of the most blatant examples I can point to of dangerous and out-of-control censorship coming out of the big tech companies. They need to be reined in.

Russia Insider and other alternative media writing about Russia and the Middle East, SouthFront comes to mind most prominently, are constantly the victims of internet censorship – we are not allowed into Google News, our articles disappear mysteriously from Google search, and there is a constant effort to keep us down, without doing so openly.

Actually, I think this kind of heavy-handed banning of dissent is a great thing – because it will force people to wake up and realize they have to do something about this – regulate the big tech companies as public utilities.

Also on Friday, SYRIANGIRL, for the first time in 5 years, appealed to the public for financial support, by opening a Patreon account. It has only taken her 3 days to reach $500 / month in commitments. If Facebook and Youtube keep this up it will soon be $10,000 a month, and then they will have a problem on their hands. Currently SYRIANGIRL does this part-time while getting a graduate degree in chemistry. She just might decide to go full-time if people make it financially possible. I say let’s make it happen.

Dear Mark Zuckerberg and whichever faceless Orks run Youtube, – some friendly advice – this thing is going to go nuclear if you two don’t wise up and back down. SYRIANGIRL is too well-known, liked, and respected by too many important people for this not to blow up into a major stink. She speaks at top level conferences, has been on all manner of TV – in her native Australia, to RT, to Alex Jones, and many others. A lot of big people will pile on. This will blow up in your faces unless you backpedal quickly.

In our interview, SYRIANGIRL explained that she suspects that somehow her Facebook account got caught up in the tempest in a teapot around the $200,000 Russian-related entities supposedly spent trying to influence the US election. As one of our articles pointed out today:

“Oh, Putin’s bringing out the big guns now! A couple hundred thousand dollars worth of ads! Lordy, that’s a hell of an investment…”

So here is a concrete example of how the big Russia-gate lie is leading in a circuitous way to successful, respected, and influential independent media being shuttered.

All independent, alternative media should rally behind her and raise hell. Her case is a precedent – if they get away with gagging her, we are next on the list.

And please don’t forget about us. There are just two days to our own Fall fund drive left. If you havent made a donation, please consider doing so. We are falling short of our $30,000 quarterly goal, but 700 of you have donated a total of 18,000 so far, so it’s enough to keep us alive.

A sincere thank you to all who have contributed!

Here’s the transcript from the video. As I said, no hate speech here, not a drop:

“Hi everyone this is SYRIANGIRL. I have some bad news …

My Facebook account which I have been working on for five years and which has 75,000 followers has been deleted.

It was out of the blue – there was no warning or reason given.

The last thing I posted was photograph and video evidence of election fraud in the Kurdistan referendum, which is happening in Iraq: – video of people stuffing unlimited amounts of yes votes into ballot boxes, other people washing the purple off their fingers so that they can go in and vote again. And one guy even voted on behalf of his nine dead relatives.

The Kurdish Regional government has also been intimidating Assyrian Christians and yazidis, into voting ‘yes’, threatening some of them with being kicked out of refugee camps.

If you recall from my previous videos, Kurds are not the indigenous populations of Iraq and Syria. And those supporting the creation of Kurdistan are supporting a land grab, with a side of ethnic cleansing of the true indigenous peoples – effectively, a second Israel. And it’s not just me or the Iraqi government saying this, it’s also many Kurds themselves, who refer to Kurdistan as the “second Israel.”

All of this information of course doesn’t suit the agenda of the balkanization of Iraq and Syria, which is being pushed in the mainstream media. I also mentioned on Facebook the Israeli Yinon plan, and how they wanted to create a Kurdistan for the sake of Israel.

The censorship could have been the result of mass flagging by people who don’t like what I have to say.

I’ve emailed Facebook in the hopes of getting to the bottom of this, and to get my account back. But if it doesn’t come back, you’ll know why, and you’ll know that much of freedom of speech has truly died.

In the meantime, I have created an account on the Facebook alternative, Minds, so that those who have Minds can add me.

I’ve been censored many times before. It usually happens when I’ve hit the nail on the head, in terms of opposing mainstream media lies.

Recently one of my YouTube videos about how ISIS got hold of weapons shipments from US air drops, was censored.

In fact, while the mass YouTube demonetization caused an uproar earlier this year, I have been demonetized for 4 years.

Those years ago I was curious, and I asked why my account had been demonetized, while other news media outlets, and even alternative media oh, we’re not.

I requested details about what I was doing differently that cause this demonetization.

I got a very bizarre reply of “I’ll tell you later”. That later never came and the case was closed and I didn’t open it again.

It’s never been about the money for me. I didn’t want the money to tarnish the very important message.

However it’s come to that point that in order to keep going and defend myself I need to ask for help.

That’s why I’ve opened a Patreon account. So if, and only if, you can afford it, I would appreciate you lending me a dime, so that I can fight the sensors, and defend my name, which sometimes can be a matter of resources.

And who knows where the censorship is going to go, the situation is precarious. Facebook may only be the beginning.

But no matter how they try to silence me I promise you one thing, I’m going to keep fighting.