The highway that winds through British Columbia’s Kootenay National Park was closed for much of the day Wednesday as wildfire smoke made for dangerous driving conditions.

Parks Canada said it closed Highway 93 from Castle Junction near the Trans-Canada Highway to the town of Radium Hot Springs some 100 kilometres south.

The highway reopened late Wednesday but drivers were being warned that with shifting conditions, there was always the possibility they would be forced to detour again.

On Thursday afternoon, Parks Canada issued a news release suggesting that the best time to travel the highway over the long weekend would be between 7 a.m. and 2 p.m.

The agency also told motorists to check for possible temporary closures at either www.DriveBC.ca or www.alberta511.ca.

“The visibility is definitely under 100 metres, some places probably under 50 metres,” she said earlier in the day.

“That’s significantly larger than the last estimate mostly due to the fact that we were unable to get to the southern end of the fire to do accurate mapping due to smoke,” she said.

The fire has also closed the Sunshine Village resort in Banff to visitors. 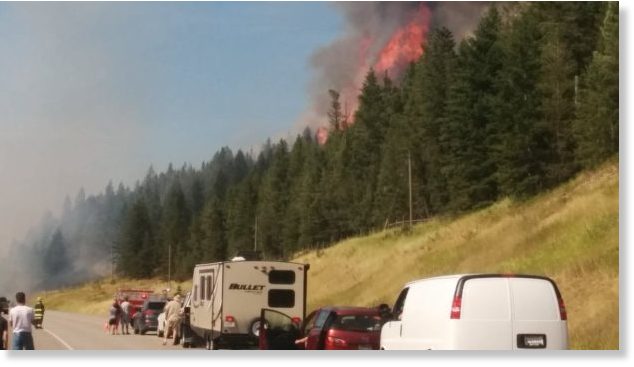 Flames burn along Highway 95 south of Canal Flats.Parks Canada ordered the resort to clear out guests nearly two weeks ago to make room for firefighting crews and heavy machinery to fight the Verdant Creek wildfire a couple of kilometres away.

Park said starting Thursday, firefighters would once again be working out of Sunshine Village, where it is less smoky than the area of Kootenay National Park where they are currently based.

There are about 60 firefighters and 10 helicopters battling the fire, but Park said she is expecting that to increase in the coming days. 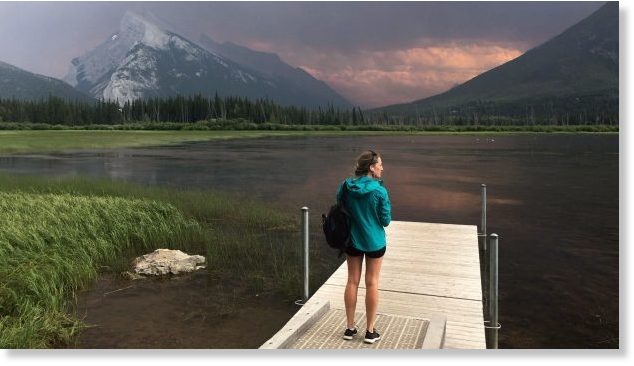 A woman takes in the smoke blanketing Mt. Rundle from a forest fire in Kootenay National Park as she stands on a dock on the Vermillion lakes near Banff, Alta. Sunday July 15, 2017