Japanese and Egyptian archaeologists have unearthed a 3,000-year-old tomb of a Royal scribe in Thebes in Egypt. The tomb belongs to a man named Khonsu, described as “true renowned scribe” and its walls were inscribed with pictures of baboons worshipping the sun god Ra.

The Tomb Dates Back to the Time of the Ramesside Kings

A group of archaeologists led by Jiro Kondo of Waseda University in Japan unearthed the 3,000-year-old tomb thought to be of a royal Egyptian scribe in the vast necropolis at ancient Thebes. The tomb dates back to the period of the Ramesside Kings, who reigned over Ancient Egypt’s New Kingdom during the 19th and 20th dynasties (from 1292 BC to 1069 BC), according to a statement published by Egypt’s Antiquities Ministry. The Ramesside period, is the later part of the New Kingdom of Egypt, also known as the Egyptian Empire, an illustrious era of ancient Egyptian history between the 16th century BC and the 11th century BC, covering the Eighteenth, Nineteenth, and Twentieth Dynasties of Egypt. The New Kingdom saw Egypt attempt to create a buffer between the Levant and Egypt, and attained its greatest territorial extent. 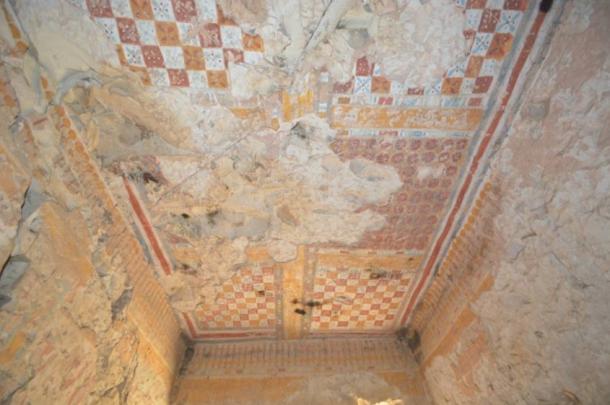 As the official website of Waseda University stated, the team of archaeologists had been cleaning debris out of part of the tomb of Userhat in the el Khokha area of the necropolis. Userhat was an Egyptian official who served Amenhotep III, King Tut’s grandfather, with the title of “overseer of the king’s private apartment.” The walls of the tomb were inscribed with images of gods, humans and baboons, while the owner of the T-shaped tomb is assumed to have been a nobleman or scribe named “Khonsu.” Professor Kondo told Seeker that his team were amazed by what they found inside, “On the north wall of the entrance doorway, we found a scene showing the solar boat of the god Ra-Atum being worshipped by four baboons showing the pose of adoration”.

The Role of Baboons in Ancient Egypt

Today, most of us see them as loud, smelly, annoying or even aggressive creatures, but baboons had a special role in ancient Egypt back in 1,200 BC. Babi, also known as Baba, was the deification of the baboon, and was worshipped since at least the Predynastic period. The discovery clearly implies that royal scribe Khonsu probably held baboons in extremely high regard for them to have been carved in such a prominent place in his tomb. Baboons are aggressive animals and so Babi was viewed as a bloodthirsty god, who devoured the souls of the unrighteous. Baboons also have high sex drives, so Babi was also considered the god of virility of the dead. He was often shown with an erection, and Egyptians prayed to him to ensure they would not suffer from impotence in the afterlife. 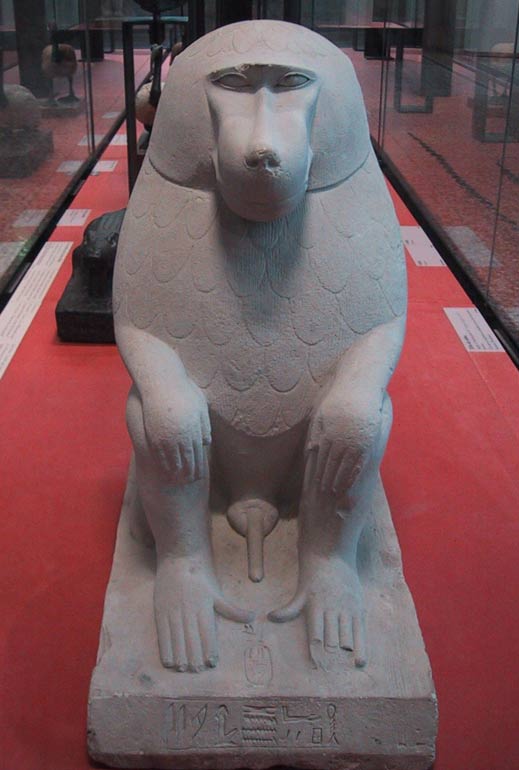 Egyptian statue of a baboon at the Louvre museum (CC by SA 3.0)

More Wall Decorations are Expected to be Found

Back to the newly discovered tomb, according to the archaeologists, another wall depicts Khonsu and his wife worshipping the gods Osiris and Isis, with two ram-headed deities, likely Khnum or Khnum-Re. Osiris and Isis appear again in another wall carving, this time in a seated pose. The ceiling is also vividly painted with geometric patterns, some that look like checkerboards. For now, the tomb’s inner chamber is blocked by piles of stones, but Kondo and his team are quite confident that more wall decorations are waiting for them once they manage to venture inside. 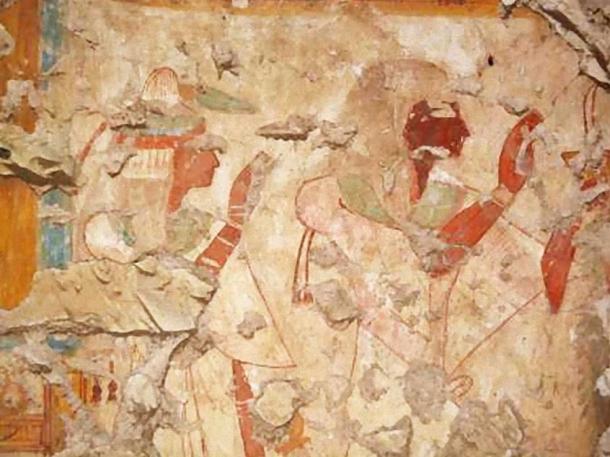 Khonsu and his wife worship the gods Osiris and Isis. Credit: Waseda University