Zoroaster was a prophet of ancient Persia, whose teachings laid the foundation for the religion known as Zoroastrianism, which largely dominated the land of Iran until the arrival of Islam after the fall of the Sassanian Empire. Whilst this figure is known as Zoroaster in the West (being derived from the Greek ‘Zoroastres’), he is referred to as Zarathustra in Avestan. The teachings found in Zoroastrianism have been compared to those of the Abrahamic faiths, i.e. Judaism, Christianity and Islam, and it has been suggested that the former had a strong influence on the latter. 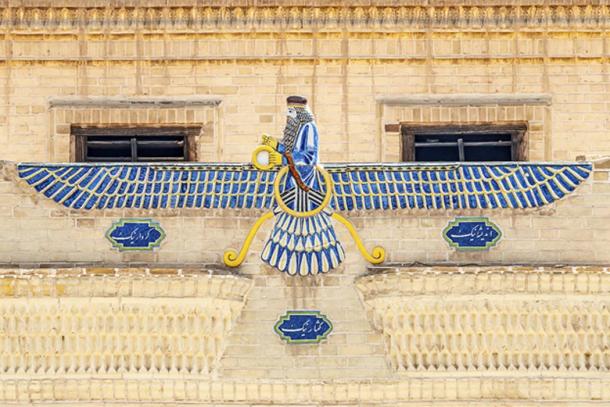 Where Was Zoroaster Born? Where Did He Live?

Neither the period during which Zoroaster lived in, nor the place where he was born or lived is certain. For the former issue, there are several sources dealing with it, though they are by no means in agreement with each other. While the Avesta, the sacred texts of Zoroastrianism, do not mention when the prophet lived, other Persian sources , namely the Pahlavi works, i.e. Middle Persian literature, and the Sassanian records, do deal with this question.

In the Bundahishn (meaning ‘Primal Creation’), which is an encyclopedic collection of Zoroastrian cosmogony and cosmology written in Middle Persian, a list of Persian rulers can be found. One of them is Alexander the Great , who is stated to have ruled Persia 258 years after the time of Zoroaster. If this version were accepted, then Zoroaster would have lived around the beginning of the 6th century BC, considering that the Macedonian conquest of the Achaemenid Empire happened in 331 BC. 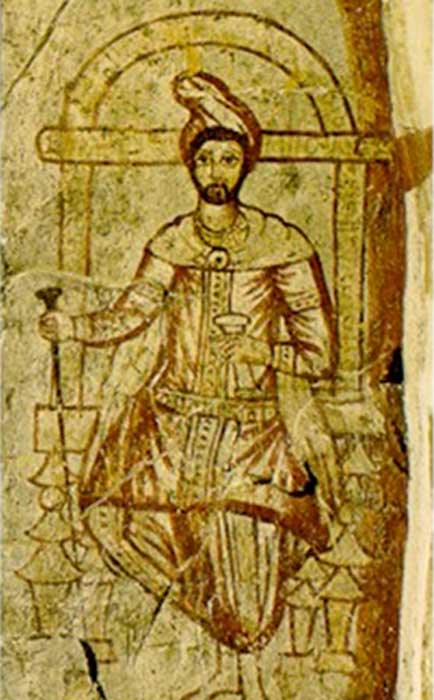 The issue of Zoroaster’s life has also been discussed by Classical authors, though there is hardly any agreement with the Persian sources. Plutarch, for example, wrote that Zoroaster lived 5000 years before the Trojan War . Clearly, there is a difference of many millennia between this source and the Bundahishn.

Modern scholars reckon that Zoroaster lived between 1500 BC and 600 BC. These dates have been determined based on analyses made on the Avesta. 1500 BC has been given as the earliest possible date based on the linguistic structure of the text, while 600 BC has been given as the latest possible date, as there is no reference at all to the Achaemenids, who came to power in Persia during the middle of the 6th century BC.

Based on clues found in the Avesta, Zoroaster in believed to have lived somewhere in the eastern part of Persia. Further information about his life may be found in the Gathas, the hymns of the Zoroastrian liturgy. From these hymns, we know that Zoroaster’s father was Pourusaspa and his mother was Dughdova. Zoroaster was a member of the Spitamid family, and was a priest. He is said to have used holy water, prayers, and other ritual practices in his work – which may have included performing exorcisms .

It was at the age of 30 that Zoroaster received a divine revelation of Ahura Mazda (‘Wise Lord’) and his Amesha Spentas (‘Holy Immortals’) while performing a ritual purification. This completely transformed Zoroaster’s view of the world and he sought to preach his views to others.

An early 19th-century perception of Zoroaster derived from the portrait of a figure that appears in a 4th-century sculpture at Taq-e Bostan in south-western Iran. ( Public Domain )

As one may expect, Zoroaster’s views were not accepted with open arms by everyone around him. Initially, he only had one follower, his cousin Maidhyoimanha. On the other hand, Zoroaster made many enemies, as some of his teachings were in opposition to those held by the status quo.

For instance, Zoroaster was against animal sacrifices, which were carried out by the priests at that time for certain rituals. Another example can be seen in the fact that Zoroastrianism is a monotheistic religion, while the people of Zoroaster’s society was essentially polytheistic. 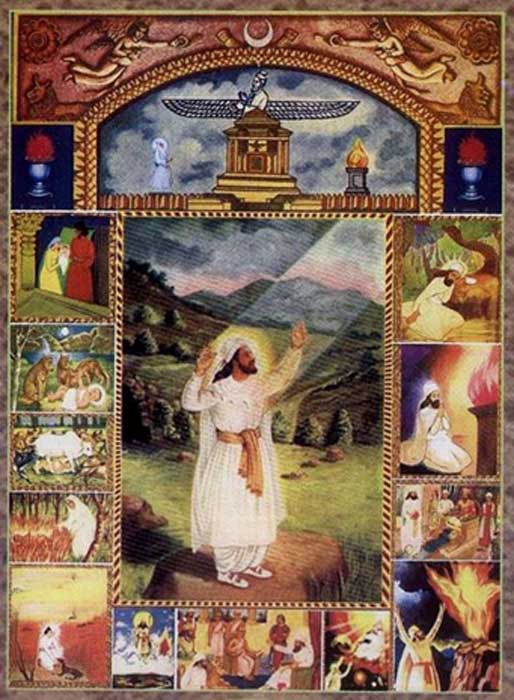 Nonetheless, Zoroaster endeavored to preach his ideas in his homeland for 12 years. As this was not successful, he decided to leave to find some place where his teachings would be more readily accepted by the population. Eventually, Zoroaster arrived in the lands of King Vishtaspa, who ruled the area known as Bactria.

The king and his wife, Hutosa, came across Zoroaster while he was debating with the religious leaders of this land. The king was impressed by Zoroaster and decided to accept his ideas, thus making it the official religion of the kingdom.

As a general overview, Zoroastrian followers worship a benevolent deity named Ahura Mazda and their religious texts deal with themes such as good and evil and retribution. The religion’s motto is “Good Thoughts, Good Words, and Good Deeds” and the main religious text is the aforementioned Avesta. Their gatherings and rituals are generally held in fire temples . 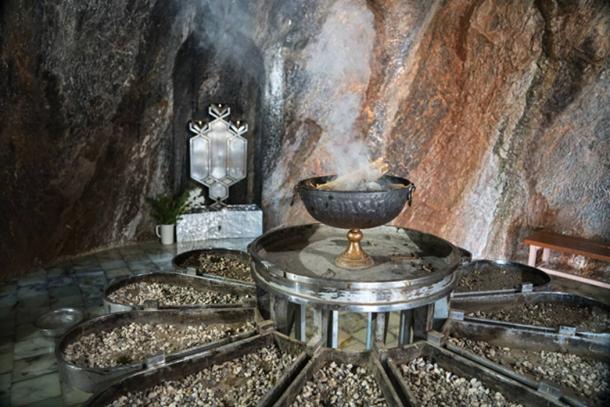 Inside a Zoroastrian fire temple in Iran . ( transfers-film/Adobe Stock)

In later times, Zoroastrianism would be the official religion of the Achaemenid, Parthian, and Sassanian Empires, all of which were centered in Persia. According to tradition, Zoroaster was 77 years old when he was murdered by a Turanian by the name of Bratrok-resh.

Although it is not an especially large community, the Zoroastrian faith still exists today. There are an estimated 200,000 Zoroastrians worldwide, with the majority (around 60,000) residing in India. Iran, the Kurdistan Region, Pakistan, and other Central Asian countries also have small Zoroastrian communities, and very small populations of Zoroastrian believers are also found in some parts of the West .

There is some debate on why numbers are low. But one of the popular explanations is that, ““Parsi protectionism” is to blame for the religion’s declining numbers, and in their attempts to protect the ancient Persian genome in India, the administrators of the religion prohibited inter-faith marriages, effectively stopping new people entering the faith.” 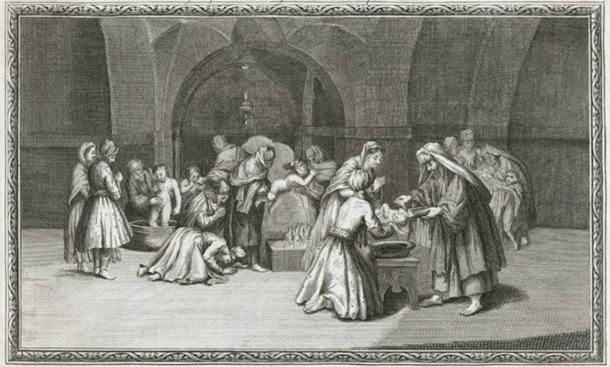 Illustration of a Zoroastrian baptism in 1726. ( Archivist /Adobe Stock)

And one of the attempts to ebb this decline has come from Ms. Havewala, a Mumbai-based mother-of-two, who created a dating app for modern followers of the Zoroastrian faith . She hopes that harnessing modern technology will help keep the ancient religion going. Only time will tell on how effective this may be.

Palmer, J., 2010. Zoroaster – forgotten prophet of the one God. [Online]
Available at: https://www.theguardian.com/commentisfree/belief/2010/jul/13/abrahamic-religion-zoroastrian-judaism