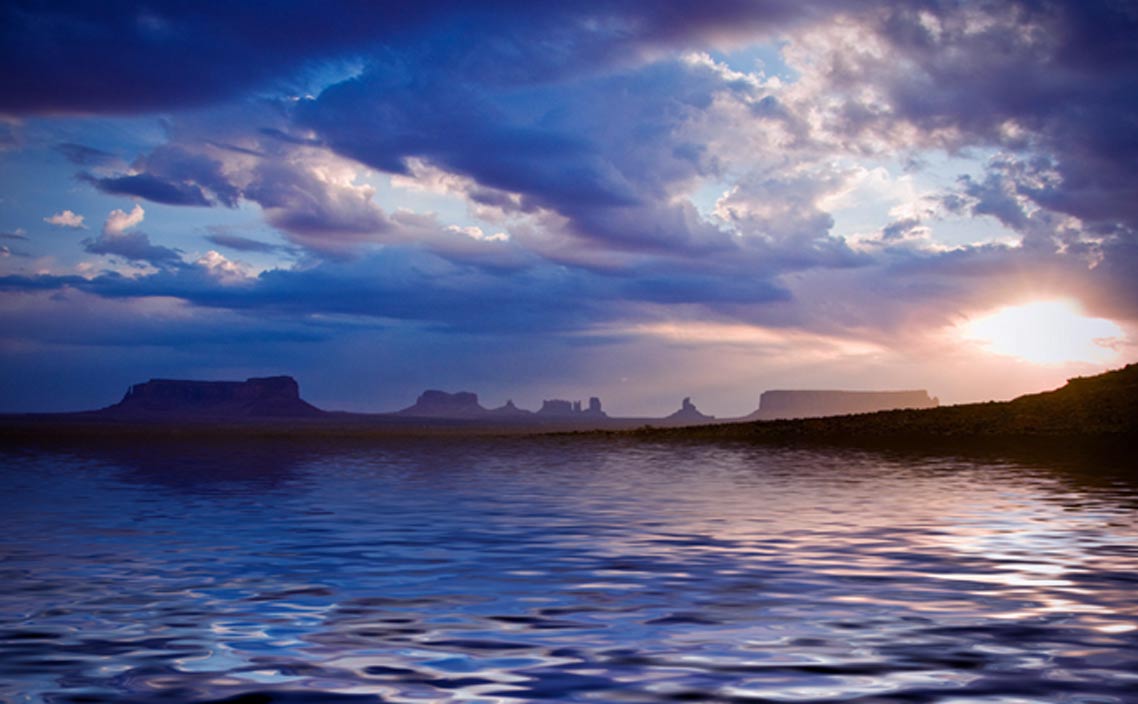 Skeptics and believers alike tend to overlook the fact that the story of Atlantis, as told by the Egyptian priests who related the story to Solon, is a complex narrative involving three civilizations that supposedly existed contemporaneously with each other; namely, Athens, Egypt, and Atlantis itself.

According to Sonchis, the head priest of Sais, the distant ancestors of the Athenians had led a coalition that counted amongst its members’ other Hellenic city-states and an ancient Egypt to a spectacular victory over the armies of Atlantis—which had aggressed upon them and attempted to reduce all who dwelt along the shores of the Mediterranean to slavery.

Not long after the Athenian victory, earthquakes and floods were said to have struck the earth, destroying both the victorious Athens and the vanquished Atlantis alike, but sparing the ancient Egyptians. All of these events, as per the priests, had taken place 9000 years before their time, or from our perspective, around 11,600 years ago. The priests then went on to explain that the Athenians had forgotten perhaps this greatest episode in their own history because of this cataclysm, and others besides, which had left only the uncultured and illiterate as survivors, whereas the land of Egypt was protected from such events by favorable geography. 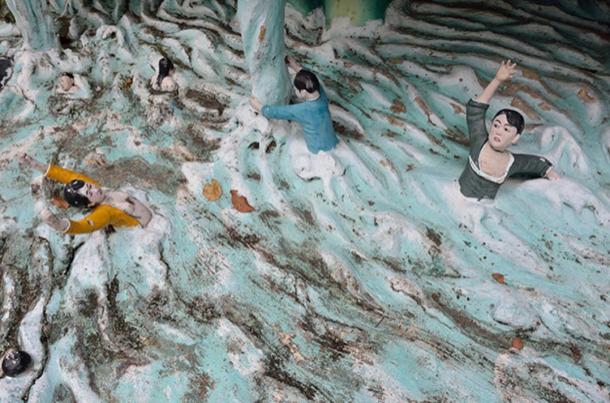 A recreation of a devastating flood. (Flickr/CC BY 2.0)

In one of Plato’s dialogues, the Timaeus, the priest goes on to explain how the Athenians were struck by not merely one, but several floods, and why his own homeland was spared:

“And when … the Gods purge the earth with a flood of waters, all the herdsmen and shepherds that are in the mountains are saved, but those in the cities of your land are swept into the sea by the streams; whereas in our country neither then nor at any other time does the water pour down over our fields from above, on the contrary it all tends naturally to well up from below (emphasis mine)” (Timaeus, 22e). 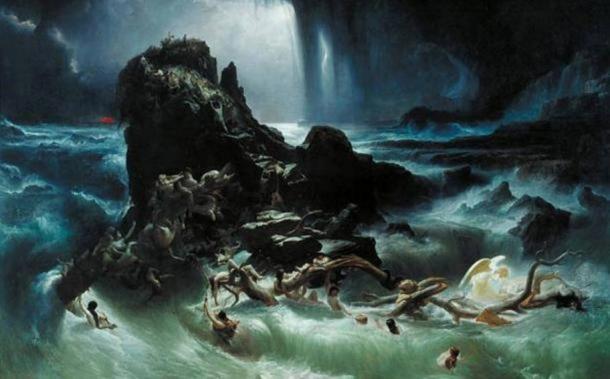 Later on in the same dialogue, the priest describes these floods as “flood[s] from heaven” (Tim., 23a).

The question that naturally follows is, of course, what caused these floods? I believe that the prosaic explanation of flooding caused by the overflowing of rivers or excessive rainfall cannot adequately account for the scale of devastation that the priests described. Such floods have repeatedly struck Greece over the last 3,000 years without “leav[ing] none of you but the unlettered and uncultured” (Tim., 23b). 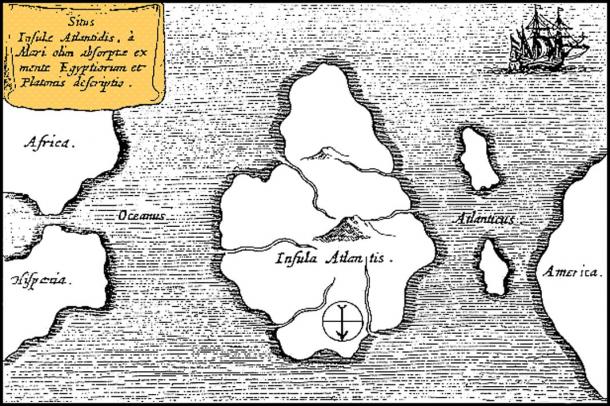 Referring back to the passage quoted, what could cause “water to pour down over fields from above” as opposed to “naturally welling up from below?” This would certainly have happened if the ancestors of the Greeks inhabited lands that were below sea level; conversely, if the Egyptians had always lived on lands above sea level, any floodwaters originating from the ocean would indeed “tend naturally to well up from below.”

Any dry lands that are below sea level with a sea or ocean nearby are at a constant risk of catastrophic flooding, especially in a region that is prone to earthquakes and landslides, for if any portion of the higher lands that surround the below sea level region collapse below sea level, the surrounding sea, impelled by the force of gravity, will pour into the low lying lands. Moreover, the magnitude of such floods would certainly suffice to account for the near total destruction of the primeval Greeks and their loss of culture; these floods, by their very nature, would have come without warning and with tremendous rapidity. Thus far, we have only discussed Athens and Egypt, but what of Atlantis?

In a later passage, Plato recounts the destruction of the Athenians and the Atlanteans:

Could the common fate of the Atlanteans and the Athenians be accounted for by a commonality in the geography of their respective lands? That is, could parts of Atlantis have been below sea just as I hypothesized the homeland of the primeval Athenians to have been? 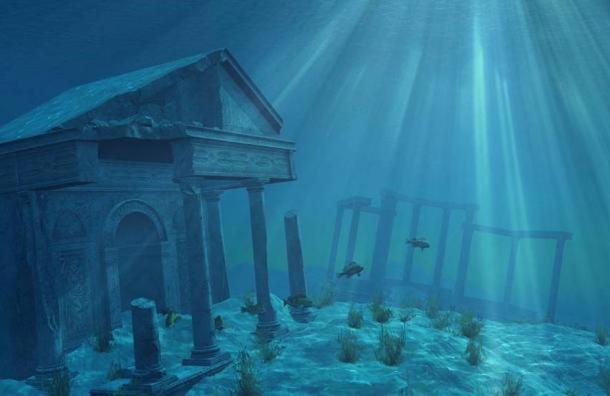 Here is what Plato has to say about the geography of Atlantis in the Critias:

“In the first place, then, according to the account, the whole region rose sheer out of the sea to a great height, but the part about the city [the royal city of Atlantis] was all a smooth plain, enclosing it round about, and being itself encircled by mountains which stretched as far as to the sea; and this plain had a level surface and was as a whole rectangular in shape, being 3000 stades long [340 miles, 547 km] on either side and 2000 stades wide [230 miles, 370 km] at its center, reckoning upwards from the sea. And this region, all along the island, faced towards the South and was sheltered from the Northern blasts. And the mountains which surrounded it were at that time celebrated as surpassing all that now exist in number, magnitude and beauty…” (Critias, 118a-b).

In other words, the royal city of Atlantis was situated on a large, nearly rectangular plain with dimensions 340 miles by 230 miles, which was in turn surrounded by mountains that rose high above the sea. Although Plato never uses the word “basin” to describe the geography of Atlantis, the rectangular plain and the mountains surrounding it together form what is essentially a textbook definition of a basin –a lower-lying land surrounded by higher lands. Could the city of Atlantis, and the plain on which it was situated, have been below sea level not only after their destruction in which Atlantis was “swallowed up by the sea and vanished” but also before? If it were, the mountains surrounding the plain must have been above sea level all around the plain so as to keep the surrounding waters from pouring into it. What is the advantage of this hypothesis?

What Did Not Happen?

Thus far, geologists and scholars who dismiss the veracity of Plato’s account have done so on the basis of impossibility of the entire landmass of Atlantis – larger than 80,000 square miles – sinking into the sea in a single day and night. An example of this argument is presented by professional archaeologist Keith Fitzpatrick-Matthews in his blog, Bad Archaeology:

“Put simply, continents do not rise and fall into the oceans; they are composed of tectonic plates moving across the earth very slowly and in different directions. As they move and run into each other, they cause earthquakes and the formation of mountain ranges. One plate may push underneath another, slowly to be absorbed back into the mantle (as is happening, famously, in Los Angeles), or adjacent plates may be traveling in opposite directions, causing earthquakes. In either of these scenarios, the continent itself does not disappear beneath the ocean; either the collision produces new mountain ranges (The Himalayas, for instance) or one plate is slowly drawn under the other. Plato’s – and Hancock’s – idea of a rapid sinking is not part of plate tectonics.”

But supposing that the plain of Atlantis was already below sea level even before it was deluged (and the surrounding mountains above sea level all around) circumvents the necessity of the entire landmass of Atlantis having sunk in order for the city and the plain to be swallowed up by the sea, as only a single point along the encircling mountain range need have sank below sea level for the surrounding sea to begin to pour into the plain below! Therefore, Fitzpatrick-Matthews’ argument above is entirely bypassed, as well as the similarly constructed arguments put forth by other scholars disputing the consistency of Plato’s account. 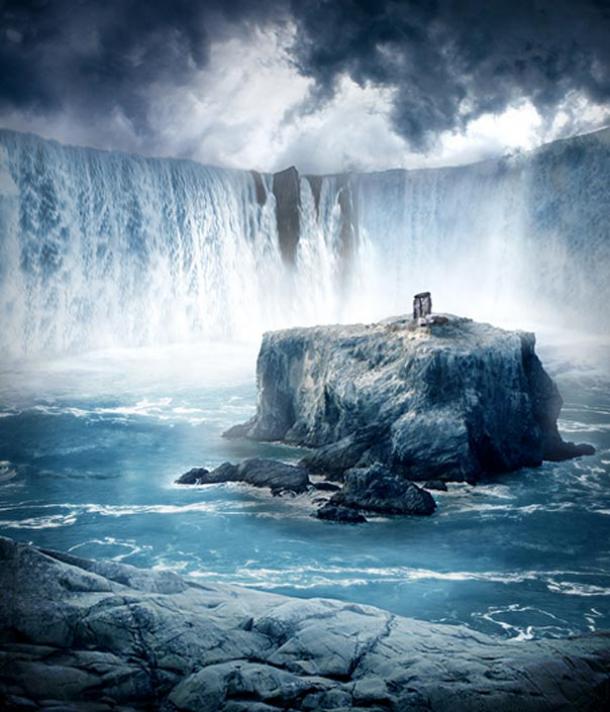 Water pours down over a rocky ledge and into valley basin below. (Flickr/CC BY-ND 2.0)

The sinking of such a comparatively smaller area of land is not only plausible, it is a verifiably documented reality; examples of smaller areas of land collapsing abound, with the sinking of Port Royal in Jamaica in the 17th century, as well as Helike in Greece and the significant expanses of land around them in the 4th century BC following earthquakes, being among them. In these examples, though the sinking of these cities and the small areas of land surrounding them to below the level of the sea must have been a tragic event for those who lived in them, the damage was ultimately contained to only the lands that collapsed.

But if the same earthquake had occurred somewhere along the hypothetical mountain range that surrounded the plain of Atlantis (assuming that it was below sea level), and a small area of land had collapsed or sunk likewise below the level of the sea would have, in turn, triggered an infinitely greater disaster, as the waters of the surrounding ocean would have begun to pour into the plain; further, it is entirely reasonable that such a flood could have taken only a single day and a night.

If, on the other hand, the plain of Atlantis was above sea level before its destruction, as has been implicitly assumed by most scholars, this 80,000 square mile plain and its surrounding mountains would have had to sink in a single day and a night for it to have been submerged.

While such a scenario is not entirely impossible, there really is no known geological mechanism that could conceivably cause such a large landmass to sink so rapidly, just as Fitzpatrick-Matthews pointed out. Therefore, one may reasonably ascertain that if Atlantis did indeed, its plain was very likely to have been below sea level and its surrounding mountains above sea level all around—that is, Atlantis was very likely an endorheic basin: a closed drainage basin that retains water and allows no outflow to other external bodies of water.

The Location of Atlantis

Plato says that Atlantis was located outside the “Pillars of Heracles,” or the Straits of Gibraltar; that is, somewhere in the Atlantic Ocean excluding the Mediterranean Sea itself. A brief glance at a map of the Atlantic shows that there are really only four endorheic basins in the Atlantic Ocean – the Gulf of Mexico, the Caribbean Sea, the Arctic Ocean, and somewhat surprisingly, the subglacial Greenland landmass. If our reasoning thus far is sound, the city of Atlantis is very likely to lie somewhere at the bottom of one of these bodies of water or beneath the Greenland ice sheet. 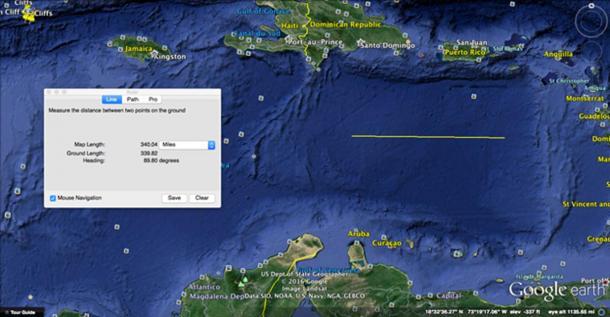 But only the Caribbean Basin has within it a rectangular plain roughly 340 miles (547 km) in one direction and 230 miles (386 km) in the other, namely the Venezuelan Plain, in the easternmost part of the Caribbean Basin. Moreover, it is indeed surrounded by mountains on all four sides: the Beata Ridge to the west, the Greater Antilles island arc to its north, the Aves Ridge to the east, and the Curacao Ridge to the south. If we wish to find the lost city of Atlantis, the Venezuelan Plain would be a promising place to begin our search. 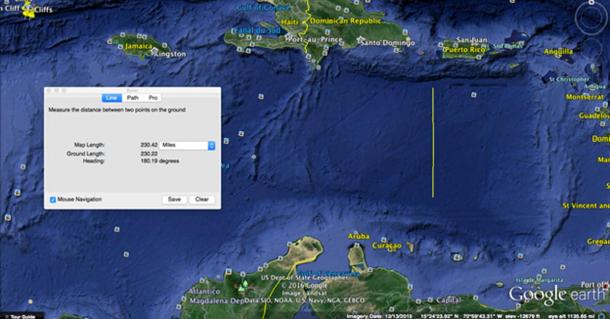