France was left counting the cost after violent storms caused damage across the country at the weekend and on Monday more weather warnings were issued for the north of the country.

The storms affected large swathes of the country not least several wine-growing regions where vineyard owners saw their crops destroyed by hail stones.

And it wasn’t over on Monday with 22 départements across the country given an Orange alert weather warning due to the threat of heavy rain and flooding.

Northern France, the Paris region and parts of central France including Burgundy were all set to be affected (see map below).

The warnings will remain in place until Tuesday morning due to the forecast of heavy rain throughout the day. 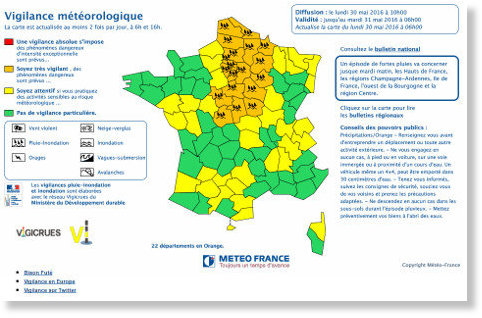 At the weekend the storms led to flash floods in many regions and caused the death of a three-year-old girl in the Yonne region of Burgundy.

She died when the basement of the family home in the village of Saint-Martin-d’Ordon flooded on Sunday afternoon.

Reports say the child slipped and fell into the basement.

Firefighters were inundated with call outs as the storms brought down trees and caused power cuts.

In one of the most serious incidents a group of children were left in hospital after a bolt of lightning struck a Paris park on Saturday as they were celebrating a birthday.

One child had to be resuscitated by an off-duty fireman on the scene and remains in a serious condition in hospital on Monday along with four others whose conditions are less severe.

Train traffic was also hit by the storms with a services derailed at Paris-Montparnasse station for more than two hours due to a power outage provoked by the extreme weather.

Several areas of the country were hit by showers of hails stones that left areas looking like winter had returned, including Limoges.

Winemakers around France saw their crops ruined by the hail storms leaving them with fears about both this year’s and next year’s harvests.

Cognac, Chablis, and Beaujolais were just some of the famous wine-growing areas hit.

“The damage is so bad,” that even the 2017 yield is threatened, said Bernard Malabride a winemaker from the Madiran region of the south west.

The ferocity of the storms caught many by surprise.

Thousands of hectares of vineyards have been destroyed around Chateaubernard, Jonzac and Bourg-Charente in the famous Cognac region. 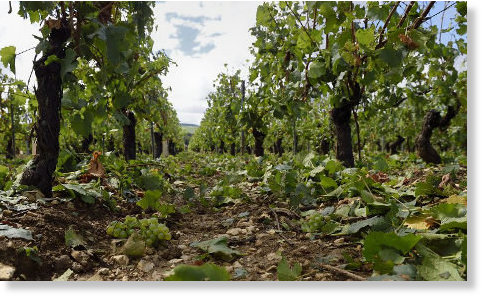 The Chablis area was also facing difficulties after late frosts in April and hail storms two weeks ago. The weekend storms wreaked more damage in the south of the wine-growing region.

“There has been a lot of damage,” said Frédéric Gueguen, president of the Chablis winegrowers.

Some winegrowers were hoping a state of natural disaster would be declared that would allow them to receive compensation.

Hail storms and other forms of extreme weather are just some of the factors wine growers in France have to contend with. Industry chiefs claim the storms are becoming more and more frequent and the vineyard owners should make sure they are insured.

According to Le Parisien newspaper only 15 percent of the 800,000 hectares of vineyards in France are covered by insurance.

My passionate sense of social justice and social responsibility has always contrasted oddly with my pronounced lack of need for direct contact with other human beings and human communities. I am truly a ‘lone traveler’ and have never belonged to my country, my home, my friends, or even my immediate family, with my whole heart; in the face of all these ties, I have never lost a sense of distance and a need for solitude.