But does this actually mean anything? Johnson & Johnson, another American multinational corporation which specializes in developing medical devices and selling pharmaceutical and consumer packaged goods, has been ordered to pay $72 million US dollars to the family of a woman whose death from ovarian cancer was linked to her decades-long use of the company’s talc-based Baby Powder and Shower. Approximately 1,000 more cases have been filed in Missouri state court, and another 200 in New Jersey. In this specific case, jurors found Johnson & Johnson liable for fraud, negligence, and conspiracy. You can read more about that here.

Even more alarming is the fact that the doctors who govern these peer-reviewed medical journals have spoken out a number of times on the unreliability of most published literature, which is dominated by corporate influence and scientific fraud. A common example we use here at CE is Dr. Richard Horton, who is currently the Editor-in-Chief of The Lancet, one of the most credible peer-reviewed medical journals in the world. He has explained in perfect detail the problems which plague scientific research today:

The case against science is straightforward: much of the scientific literature, perhaps half, may simply be untrue. Afflicted by studies with small sample sizes, tiny effects, invalid exploratory analyses, and flagrant conflicts of interest, together with an obsession for pursuing fashionable trends of dubious importance, science has taken a turn towards darkness. (source)

Dr. Marcia Angell, a physician and the current Editor-in-Chief of The New England Medical Journal, also expresses these sentiments:

It is simply no longer possible to believe much of the clinical research that is published, or to rely on the judgement of trusted physicians or authoritative medical guidelines. I take no pleasure in this conclusion, which I reached slowly and reluctantly over my two decades as an editor of The New England Journal of Medicine. (source)

John Ioannidis, an epidemiologist at Stanford University School of Medicine, published a study titled “Why Most Published Research Findings Are False” which explains the issue in detail. To this day, his paper is the most widely accessed article in the history of the Public Library of Science. And this was more than 10 years ago — the problem has clearly worsened in the intervening years.

There are countless other examples of insiders exposing these truths; as you can see, much of what these corporations say, and the scientific literature that they fund/publish, should be greeted with extreme caution.

Most health conscious people can admit to carefully looking over the nutritional information and ingredient list on the foods they buy, but how often do they do the same for personal care products?

If your toothpaste contains dangerous ingredients like triclosan, sodium laureth sulfate, glycerin or any artificial sweeteners (including aspartame, sorbitol and saccharin), then you should seriously consider tossing that tube into the trash and going for a much safer, natural alternative that can get the job done just as well as regular toothpaste–if not better.

You could head on over to your local health food store to look for organic toothpastes or you could even conduct some thorough research on the more common brands of toothpaste sold in stores (since not all of them contain toxic ingredients). But if you want to save a bit of money in addition to going all natural with your oral care, you could simply stop using toothpaste all together and instead switch to some of the alternatives listed below. 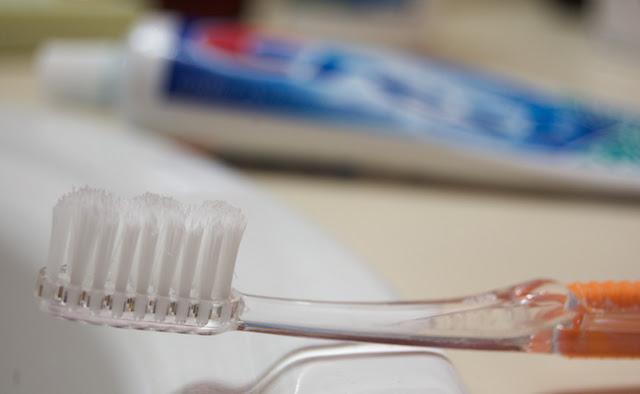 1. Baking soda
A study from the Journal of Clinical Dentistry found that Arm & Hammer baking soda was effective at cleaning teeth and removing plaque to fight off tooth decay. You’re probably already well aware of the many toothpastes that actually contain baking soda already. If you can withstand the taste and the grittiness of plain baking soda, you might want to try it!

2. Peroxide
According to WebMD, peroxide can be an effective cleansing solution for your mouth because of its bacteria-killing power, but you have to be ultra careful with it. If you’re going to try this alternative, make sure you dilute the peroxide in water so you’re not brushing with it at full strength, which could potentially burn your gums.

3. Sea salt
Sea salt is rich in a variety of essential minerals, and some people claim that it really helps to whiten their teeth. Try diluting sea salt in water and using it to brush your teeth. If you decide to use straight sea salt (without diluting it) you could risk abrasion.

4. Xylitol
Xylitol is a naturally occurring sugar alcohol that can be found in fruits and vegetables, which is often used as a sugar substitute in some food products. Some research has shown that it may prevent tooth decay, but ultimately more evidence is needed to back this claim up. You can get xylitol as a gum, as lozenges, or you can simply take it in its sugar form and swish it around in your mouth prior to brushing.

5. Coconut, sesame or sunflower oil
Have you heard of oil pulling? It’s an ancient oral health technique that involves taking about a tablespoon of carrier oil and swishing it around in your mouth for around 20 minutes a day. Research has shown that it can help reduce plaque and fight gingivitis. Just don’t use this as a complete substitute for brushing–give those pearly whites a scrub with your toothbrush dipped in water at the very least!

6. Peppermint, eucalyptus, cinnamon, rosemary or lemon essential oil
It’s no secret that essential oils have some seriously great antibacterial properties that make great cleansers for a range of things–including your teeth. When using essential oils, make sure you follow the safety precautions outlined by the National Association for Holistic Aromatherapy. Use a couple of drops of your favorite essential oil in water and brush away!

If you’re going to try any of these natural oral care alternatives in place of regular toothpaste, make sure to treat it like toothpaste by not swallowing it. Spit it right out when you’re done and give your mouth a good rinse.