A comparison of the Moon at its closest to Earth (left) and farthest. The change in distance makes the full Moon look up to 14% larger at perigee than apogee. Credit: Laurent Laveder

January 31st will be a busy day in the sky, as three skygazing events are occurring together. First, there’s a total lunar eclipse—the first time the moon has been completely immersed in Earth’s shadow since September 27-28, 2015. Second, this event falls on the second full moon of the month, what’s often called a blue moon. And, third, the eclipse comes just 27 hours after the moon reaches its closest orbital point to Earth, called perigee.

So is such a coincidence rare? Not especially. The last time a total lunar eclipse occurred near perigee was the one in September 2015. In fact, on that occasion the timing of perigee and the eclipse’s midpoint were less than 1 hour apart!

The last time a complete lunar cover-up took place on the second full moon of the month was December 30, 1982, at least as reckoned by local time in Europe, Africa, and western Asia—locations where the event could be seen. That event also occurred at the moon’s orbital perigee.

The last blue moon total lunar eclipse visible from the U.S. and North America happened on March 31, 1866. But on that date the moon was near apogee, its most distant point from Earth. 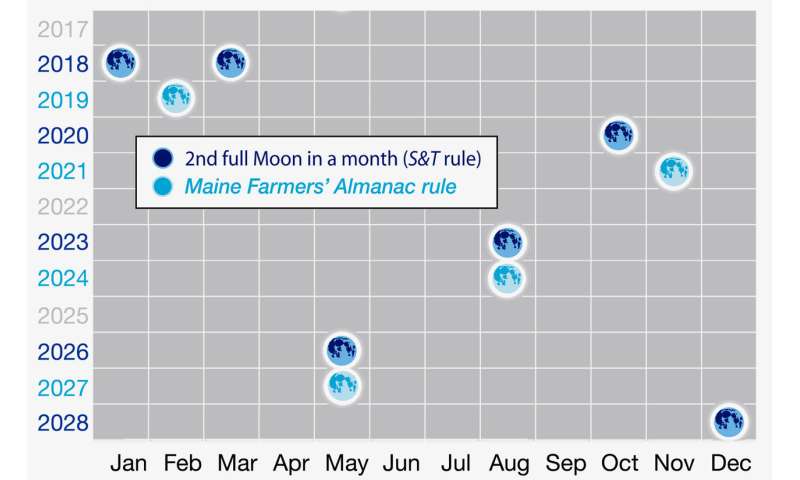 According to the Maine Farmer’s Almanac, a blue moon occurs when a season has four full moons, rather than the usual three. This type of blue moon occurs one month before the next equinox or solstice and is found only in February, May, August, and November. According to modern folklore, a blue moon is the second full moon in a calendar month. This type of blue moon can occur in any month but February, which is always shorter than the time between successive full moons. Credit: Sky & Telescope

Yet even skilled skygazers are challenged to see any difference in size or brightness between an especially close full moon and an ordinary one.

For many people, the full moon always looks unusually large when it’s near the horizon, an effect known as the “moon illusion.” Images that show a huge full moon rising dramatically above a city skyline don’t match the reality that your eyes see because the camera is magnifying the view. You can gauge the moon’s apparent size at different times using the tip of your finger or a pencil eraser held at arm’s length, or by looking at it through a narrow straw. To us, the moon always looks about ½° across.

The term supermoon was coined in 1979 by astrologer Richard Nolle, though he applied the term to any time the full moon—or new moon—is within 90% of perigee.

Sometimes two or three “supermoons” occur in a row. The moon takes 27.3 days to orbit Earth (from perigee to perigee). But Earth moves partway around the Sun during that interval, and so it takes the moon slightly longer—29½ days—to complete its cycle of phases. These closely-matched periods mean that sometimes the moon is both full and near perigee for more than one month at a time. For example, the full moons of last December 3rd, January 1st, and January 31st could all be called supermoons.

Blue moons, then and now

In modern usage, the second full moon in a month has come to be called a “Blue moon.” But that hasn’t always been the case. “This colorful term is actually a calendrical goof that worked its way into the pages of Sky & Telescope back in March 1946,” Beatty explains, “and it spread to the world from there.”

Before 1946, a Blue moon always meant something else. Many people used the expression “once in a blue moon” to mean something that occurs rarely, and some old songs use it as an expression of sadness or loneliness. There’s even a cocktail called a Blue moon—it’s a mix of gin, crème de violette (or blue curacao), and perhaps a twist of lemon. And, exceedingly rarely, the moon actually does turn blue in our sky—when a volcanic eruption, forest fires or dust storms send lots of fine dust into the atmosphere.

However, the traditional astronomical definition was quite different. The term had been consistently used in the Maine Farmers’ Almanac to mean the third full moon in a season containing four of them (rather than the usual three). But S&T’s 1946 writer, amateur astronomer James Hugh Pruett (1886–1955), incorrectly interpreted the almanac’s description, and the second-full-moon-in-one-month usage was born.

By either definition, blue moons happen about once every 2.7 years on average. Using the old, seasonal definition, the last occurrence happened in May 2016 and the next one will come in February 2019.

Using the newer definition, we’ll enjoy blue moons both during January and again in March. Because of this sequence, there’ll be no full moon at all in February—and that hasn’t happened since 1999.

Explore further: The moon is about to do something it hasn’t done in more than 150 years