The fish were strewn across the St Ives beach on Sunday, October 7

Just a day after hundreds of fish were stranded on Gwithian beach, near Hayle, thousands more were washed up on Porthgwidden beach, St Ives, on Sunday night.

This is the fifth time shoals of fish have ended up on West Cornwall shores in recent weeks.

In late September hundreds of mackerel were found stranded on St Ives Harbour Beach and just around the corner on Carbis Bay beach.

A few days later, small fish – believed to be whitebait – were discovered washed up on shore behind the Asda store in Hayle.

Then on Saturday hundreds of sprats were found thrashing about in the shallows on Gwithian beach by dog walker Jill Clark.

She said: “There were hundreds of fish which looked like they had got stranded in one of the many pools there when the tide went out. They were alive and thrashing around. Never seen this before. It was upsetting but there was nothing we could do.”

Rachel Geary, who took these photographs, said on the Love St Ives Facebook page: “Thousands of little fish washed up on on Porthgwidden beach tonight. Any ideas why?” 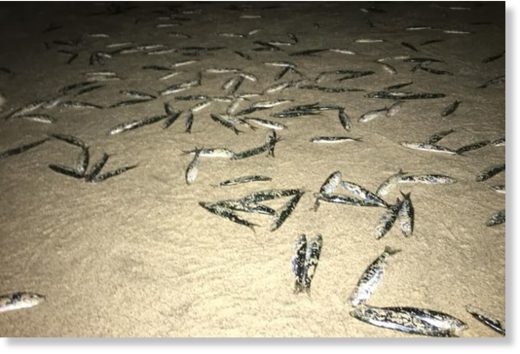 Thousands of fish peppered the beach at Porthgwidden on Sunday night

The RSPCA has previously said this is a rare occurrence, with the only recent sightings being thousands of dead mackerel on the beach near Marazion in December 2016 and thousands more whitebait washed ashore at Crinnis beach, near St Austell, in August 2017.