Osiris was one of the most prominent gods in the ancient Egyptian pantheon. This prominent deity was a member of the Ennead (known also as the Great Ennead and the Ennead of Heliopolis), a group of nine Egyptian deities worshipped primarily in Heliopolis, but whose influence spread to the rest of Egypt as well. Osiris is best known for being the god of the Underworld, a role that enabled him to judge the dead. His dominion over the dead can be seen in the fact that this god is often depicted as a mummified figure. Other features of Osiris’ iconography point towards the different attributes of this ancient god.

A Son of Gods

The word Osiris is derived from the ancient Egyptian word ‘Wsir’, which may be translated to mean ‘powerful’ or ‘mighty’. According to the Heliopolis creation myth, Atum was the first god to have existed as a result of self-creation. The god then proceeded to create the god Shu and the goddess Tefnut. The union of these two deities resulted in the birth of Geb and Nut. Finally, the offspring of Geb and Nut were Osiris, Set, Isis and Nephthys. 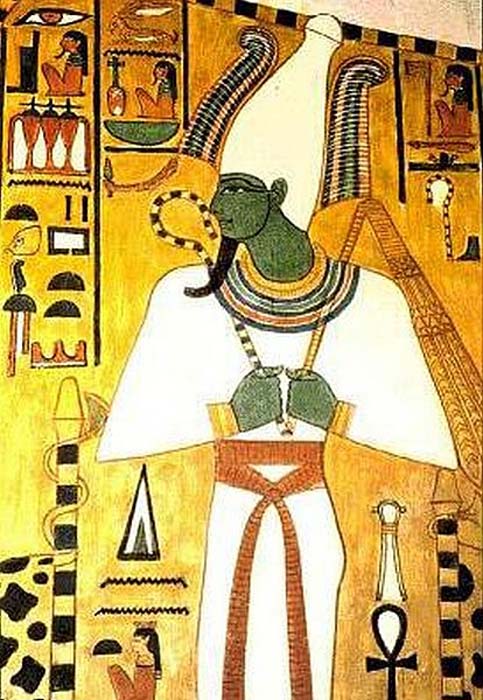 The ancient Egyptians believe that Osiris was the first ruler of Egypt, and that he brought civilization to the land. Agriculture, laws, religious institutions and culture were given to the people of Egypt by the god. His reign was a time of prosperity for the ancient Egyptians, and everyone was happy, except his brother Set, who was jealous, and grew resentful of Osiris’ success. Therefore, the jealous sibling plotted to get rid of Osiris.

Set had a beautiful coffin made that only Osiris could fit into, and then threw a feast. During the feast, Set announced that the coffin would be given to the person who fitted perfectly into it. One by one, Set’s guests tried their luck, but none succeeded. Finally, Osiris climbed inside the coffin to see if it fitted him. Seizing this contrived opportunity, Set had the coffin sealed shut, and threw it, along with his brother, into the Nile. The waters of the Nile carried the coffin into the sea, and it finally came to rest in a tamarisk tree growing near Byblos in Phoenicia. Osiris remained there until he died.

Eventually, Isis succeeded in finding and retrieving the body of her husband, and brought it back to Egypt. The goddess then sought to revive Osiris, but Set found out about his brother’s return and cut his body up into many pieces, and scattered them all over Egypt. Isis managed to retrieve all of Osiris’ body parts except his penis, which had been eaten by an oxyrhyncus fish. Nevertheless, somehow Isis was able to revive her husband, and the god Horus was conceived during this time. Still, being incomplete, Osiris could no longer rule in the land of the living, and therefore became the ruler of the Underworld. 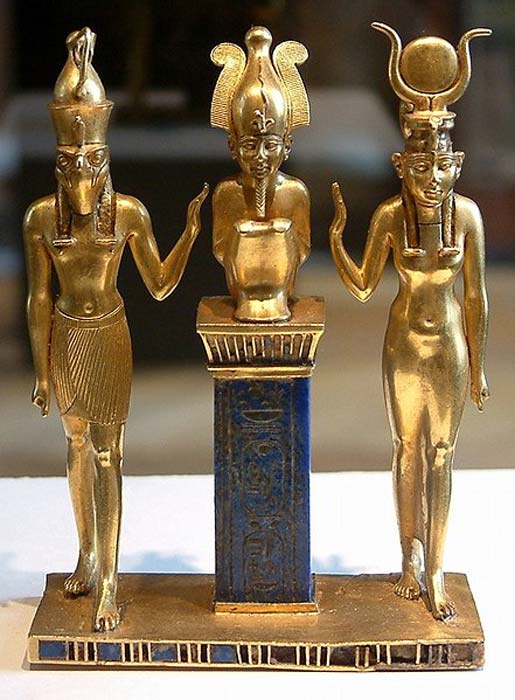 The Rise of the Osiris Following

As the ruler of Egypt, Osiris is depicted with the symbols of kingship, i.e. the Atef Crown, which is a combination of the Hedjet, the crown of Upper Egypt, and an ostrich feather on each side, the crook and flail, and a false beard. 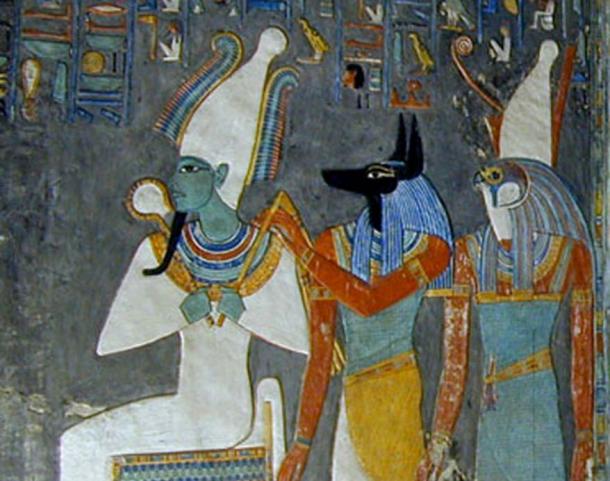 Osiris (left), Anubis and Horus, a wall painting from the tomb of Horemheb. (Image: CC BY 2.0)

As the ruler of the Underworld, the god is depicted as being wrapped up from the chest downwards in mummy bandages. Another important feature of Osiris’ iconography is his skin color, which is either green or black. The former is the color of rebirth, whilst the latter symbolizes the fertility of the Nile Valley.

Osiris was the lord of the dead in the ancient Egyptian religion. Here, he is shown in typical mummy wrappings. Based on New Kingdom tomb paintings. (CC BY-SA 4.0)

The cult of Osiris spread all over Egypt, and there are many instances in which other gods were absorbed by him. In Memphis during the Middle Kingdom, for example, Osiris merged with two local gods, Ptah and Sokar, and became Ptah-Sokar-Osiris. This ‘ability’ to assimilate other gods also enabled the worship of Osiris to last all the way until the Hellenistic and Roman periods. Serapis, a Hellenistic god created by Ptolemy I Soter, was a combination of Osiris and the sacred bull of Memphis, Apis. The cult of Osiris eventually came to an end with the advent of Christianity, though some have pointed out similarities between the two religions.

The Editors of Encyclopædia Britannica, 1999. Osiris. [Online]
Available at: https://www.britannica.com/topic/Osiris-Egyptian-god