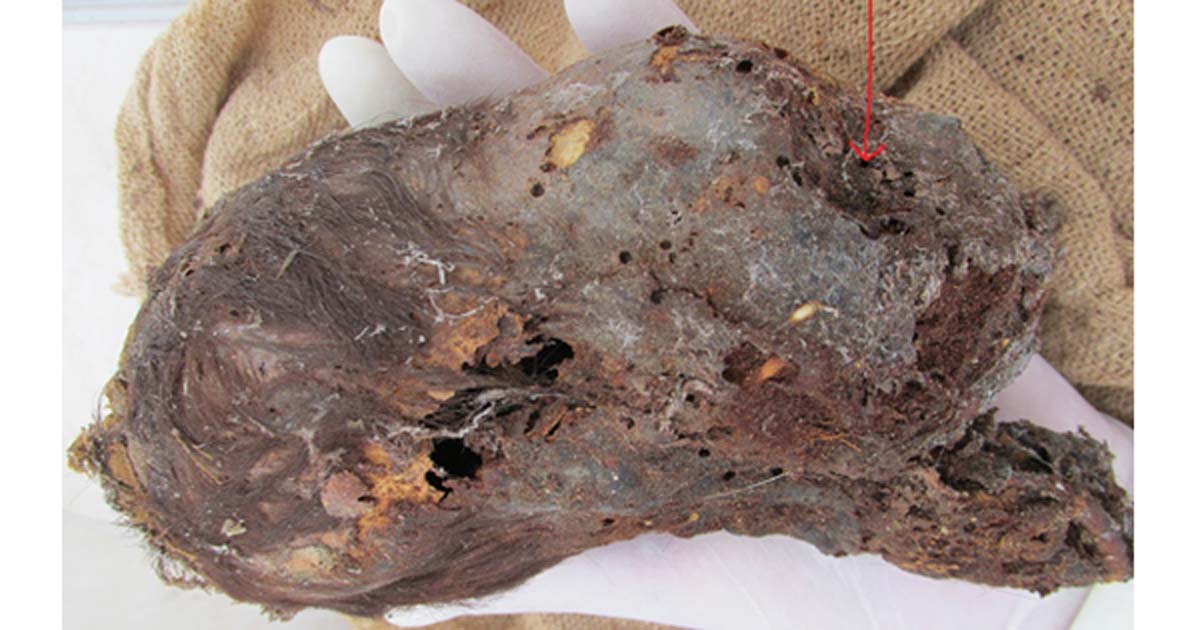 One of the most fascinating ancient elongated skull has just been discovered. According to Brien Foerster over at hidden Inca Tours, the mummified head and partial neck of a baby from the Paracas culture of Peru is one of the most amazing elongated skulls discovered to date.  This mysterious skull has auburn hair color which is not the typical black color seen in Native American People.

It is believed that the elongated skull dates back to around 2,800 years, most likely belonged to a newborn, or perhaps 3-month year old baby.

What makes this elongated skull so unique?

Well, according to experts, this mummified elongated skull is suggestive of a genetically elongated skull, meaning that it isn’t the result of head binding, since the process of artificial cranial deformation takes at least 6 months to produce the desired effect.

So far, archaeologists in Peru have found hundreds of elongated skulls with peculiar characteristics. This new discovery hints at the possibility that thousands of years ago, an ancient race of people lived in Peru with naturally elongated skulls.

Furthermore, Brien Foerster points out the ‘very fine hair’ of the baby, which curiously is auburn red in color, and not the typical black color seen in Native American People.

According to experts, this —together with the anomalous elongated skull— is one of the best pieces of evidenced which shows a clear genetic differentiation from what one would normally expect.

In addition to the auburn hair color and freakishly elongated skull, Brien Foerster notes that the vertebral column of the baby is located further back of the skull than in normal humans which “could well indicate an evolutionary adaptation to compensate for the elongated skull”.

The Paracas elongated skulls have been the subject of debate among experts for years.

In 1928 researchers found on the southern coast of Peru a cemetery that held the remains of 300 individuals with elongated skulls. The discovery was led by Peruvian archaeologist Julio Tello, and it is believed that the skulls may date from about 3,000 years ago. These are known today as the “Paracas skulls”.

Strangely, the volume and weight of the skeletons is anything but normal. According to researchers, the cranial volume of the “Paracas Skulls” is up to 25% larger and 60% heavier than conventional human skulls. And there is more to the mysterious skulls. The human skull is composed of two parietal bones located between the frontal and occipital, forming the sides of the calvaria. The calvaria or also called skullcap, is made up of the superior portions of the frontal bone, occipital bone, and parietal bones. The “Paracas Skulls” only have one.

Interestingly, it seems that Elongated Skulls are a global phenomenon. The elongated skulls phenomenon is not isolated, evidence of this are the countless skulls that have been discovered in all corners of the globe.

The head binding phenomenon has become one of the most puzzling subjects for archaeologists around the globe who seem to avoid, at all cost, exploring the tens of thousands of elongated skulls discovered around the globe: Mexico, Peru, Bolivia, Egypt and even parts of Asia.