“IN A FLASH”, SAID PAUL TO THE CORINTHIANS, “IN A TWINKLING OF AN EYE, AT THE LAST TRUMP, THE DEAD WILL RISE AND WE WILL BE CHANGED…”

While preparing for an interview with George Noory on “Coast to Coast am” on December 14, 2016 I heard two news stories that have blown my mind.

One story says Donald Trump is the new John the Baptist, the forerunner of the Second Coming, and the big-time developer who will, finally, rebuild Solomon’s Temple Tower in Jerusalem as a home for the Ark of the Covenant…so that we can have world peace.

The other story comes from Iran where an Ayatollah says the Islamic Messiah, the Mahdi’s, space ship, or cloud ship as it is described, is on the way… and will take control of the earth at, you guessed it, Trump’s soon-to-be-developed Solomonic Tower, in Jerusalem.

Is that surreal or what? People actually believe Donald Trump is John, or rather, Don, the Frickin’ Baptist, and will do what no other person has been able to do for 2,000 years!

With hope on its way out the door for some with the exit of President Obama, change is clearly in the air.

For me, the news could only get wilder if I personally was invited to Trump Tower to ride the most important elevator in the world to talk UFO Disclosure, the Second Coming and the Ark of the Covenant with the man himself.

That could happen, too.

But, this is as likely as Donald Trump actually being John the Baptist and the Mahdi riding the cosmos in a cloud ship that’s something like the Enterprise.

Then again, anything is possible these days.

We focused on my reaction to learning via WikiLeaks that for several years I have been investigating the same extraterrestrial free energy device and aliens as the late Dr. Edgar Mitchell, the sixth man to walk on the moon and a passionate consciousness and Disclosure advocate.

I was shocked and awed when I learned that Dr. Mitchell and I were out on the same limb. My only wish is that I knew he was there, too.

According to my research, over the past 3,500 years, extraordinary efforts have been made to find and or hide a kind of “resurrection machine” or “beaming device”. This corresponds with the free energy or zero point energy device that Mitchell’s representative referenced in hacked email to ULTIMATE Democratic insider and UFO Disclosure advocate, John Podesta.

Mitchell urgently wished to meet with Podesta about ETI (extraterrestrial intelligences) who come from a contiguous universe that are working directly with God, and who seek to bring us this zero point energy device or “resurrection machine”.

I have equated these ETI with the Seraphim angels, beings of pure light and love that live at the throne of God, but can take on human form and influence earthly activities.

The device they wish to offer us is the same one the Seraphim guarded in the ancient world,…the Ark of the Covenant (well, what we commonly think of as the Ark is part of the device, anyway). 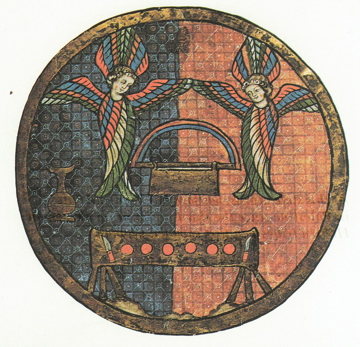 Ark of the Covenant tended by Seraphim angels or Dr. Edgar Mitchell’s ETI.

You can watch my recent 1.5 hour presentation on this device, “The Angels, the Astronaut and the Ascension Device”, which is available on my Ascending Soul flash drive.

Sadly, Mitchell died in February 2016 before delivering his message to Podesta.

After going dark with this research for several years (due to too many of the wrong kind of prying eyes), I decided it was time to pick up Dr. Mitchell’s thread and trust the angels by talking about it again.

THE DEVICE AT THE CENTER OF END TIME PROPHECY

George and I touched on the central role Mitchell’s extraordinary ETI device plays in the other ETI, End Time Idiocy, excuse me, prophecy.  I don’t know if Mitchell knew the device he so passionately sought is the Ark of the Covenant or not.

Like many of the billions of adherents to Judaism, Christianity and Islam, Mitchell may or may not have known it, but all three religions have prophetic claims on the Ark as the sign or symbol of their respective messiahs, whom they believe are soon to appear.

Reclaiming the Ark and returning it to the newly rebuilt Temple of Solomon in Jerusalem is on the ‘to do’ list of the anointed one of each religion.

The trouble is, most of the billions of people who follow these religions have no idea what the real Ark of the Covenant is or what it can do. It’s not their fault. Only a few academics and a handful of mystics are aware of the actual function and nature of the true Ark.

For that matter, many of these billions have some pretty strange ideas about their ETI, too.

In Christianity, this prophecy focuses on a ‘last trump’, a tone, wave or vibration, that supernaturally transforms humanity, in a twinkling of an eye, into bodies of light that match the light bodies of the Seraphim and the resurrected Christ.

In Islam, the prophecy features the long sought return of the Mahdi, who will ride upon a cloud ship, just like his assistant or prophet, Jesus, who will recover and reassemble the resurrection machine for him.

You read that correctly.

Islamic prophecy places Jesus in the passenger seat of the Mahdi’s cloud ship. We’ll talk about his cosmic craft momentarily and Jesus’s role as the ‘assembler’ of the Ark for the Mahdi.

Prophet Muhammad’s mystical ascension to heaven on his cloud ship, the winged horse Buraq, accompanied by the archangel Gabriel, 1388.

Here’s Richardson’s National Review article on the Islamic belief in the Mahdi that is a bit more “moderate”, but just as astounding.

Can things get any weirder than they appear to be headed toward becoming?

George and I diverted our attention to the latest developments related to the Skingularity and the Sultans of Silicon Valley’s attempt to, in a flash, in a twinkling of an eye, transform us into A.I. controlled cyborgs or Transhumans.

As I discussed in The Skingularity Is Near, this subject is intertwined with religious prophecy.

Transhumanist corporations like Apple, Google, Facebook, Samsung and SONY have a goal to unify the human race in a hive mind, as they call it, via implantation of Artificially Intelligent retinal implants and nano technology in our bodies, especially our neo-cortex.  They envision everyone on the planet unified as ‘Smart Things’ connected to a ‘big A.I. brain’ called the ‘Internet of Everything’.

The advent of this ‘next human’ matches the Christian End Time prophecy of a new heaven and a new earth and the creation of new version of humanity…that carries the ‘mark of the beast’ in its forehead or in its hand.

Diving down this black hole did not allow George and I to go as deep into the resurrection machine hypothesis as we could have, including the obvious ‘Trumpiness’ of this prophecy, so I thought I would take a moment to do so here.

The road ahead is, shall we say, adventurous.

Here comes the last trump, Don the Freakin’ Baptist, the Ark of the Covenant, the Mahdi’s space craft and the s#@t storm all this brings…with free shipping!

As I see it, the actual return — or materialization — of the Mahdi (along with Jesus and the Jewish Messiah) could happen the way it did in Leviticus 16:2 when the Lord appeared in the cloud of incense upon the Ark of the Covenant.

Eye witness accounts, such as Ezekiel’s and Isaiah’s, say that when the Lord wishes to pay earth a visit ‘He’ manifests between the angels of the Ark as a luminous, humanoid figure with a rainbow light. He is on fire, burning, with light and love. The Ark is his Throne or ‘footstool’. 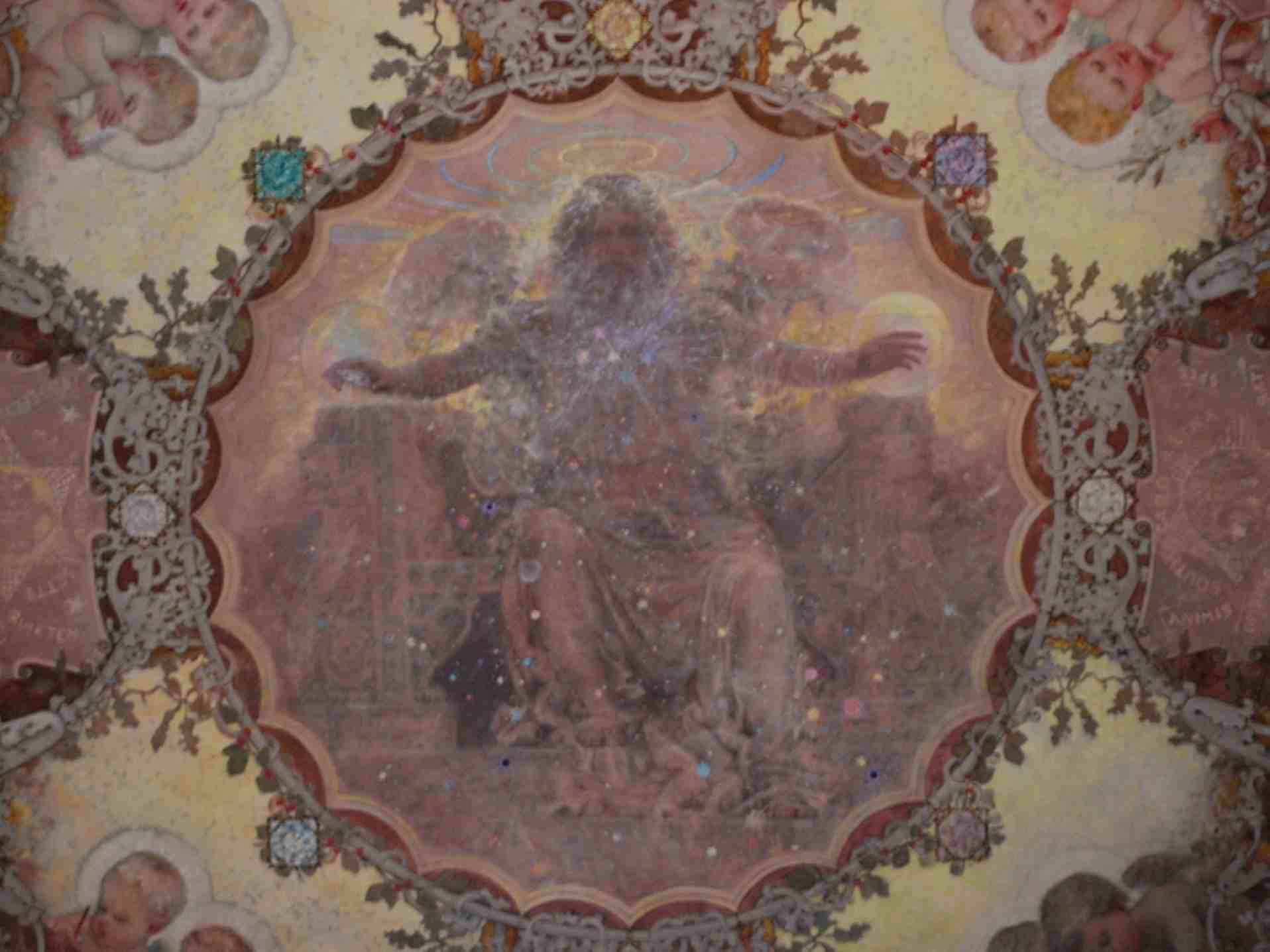 Yahweh as a luminous humanoid on the Ark Throne by Carl Gutherz. Photo ©William Henry.

The Ark of the Covenant is more than just an empty golden box. It contains a ‘kit’ of tools.

Included in the kit is the rod of Aaron (‘Enlightenment’), a flask of manna (or star food), a cruise of anointing oil, two tablets that make a book, as well as other items, including a cloak of stars.

Loads of Jewish, Christian and Islamic speculation surrounds this device.

My work is unique. I took these scattered symbols and assembled them.

And, voila! What do you know? 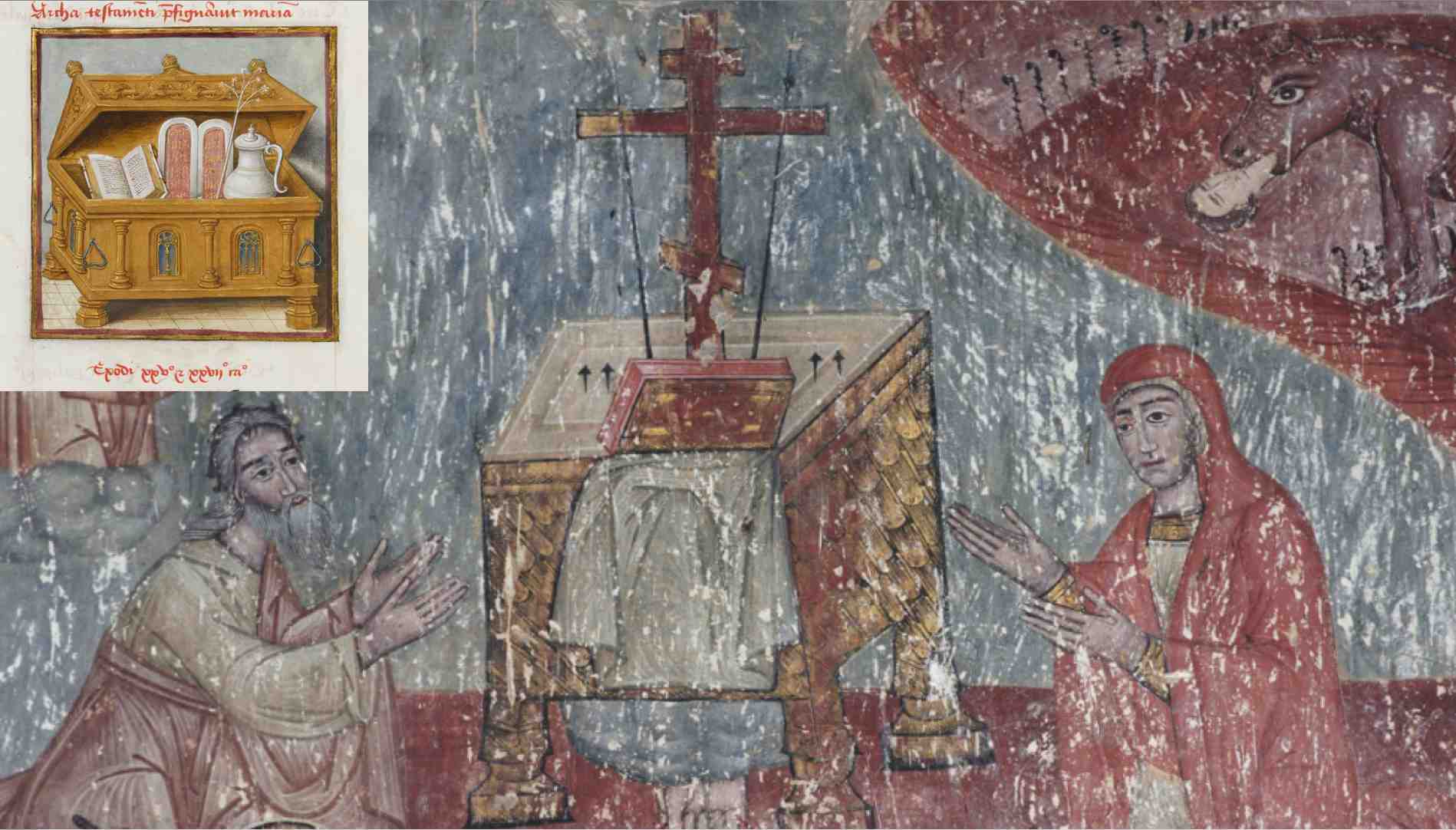 The Ark of the Covenant with its components (the Rod of Aaron, the Flask of Manna, Cruze of Anointing Oil and Book) top left. The assembled kit or Etimasia, flanked by John the Baptist and the Mary.

Once assembled, these pieces formed a device called the Etimasia or ‘the Throne of the Second Coming’.

As I documented in my 2012 book, The Judgment Day Device, the assembled  Ark of the Covenant and the Etimasia/Throne of Christ are the same thing. 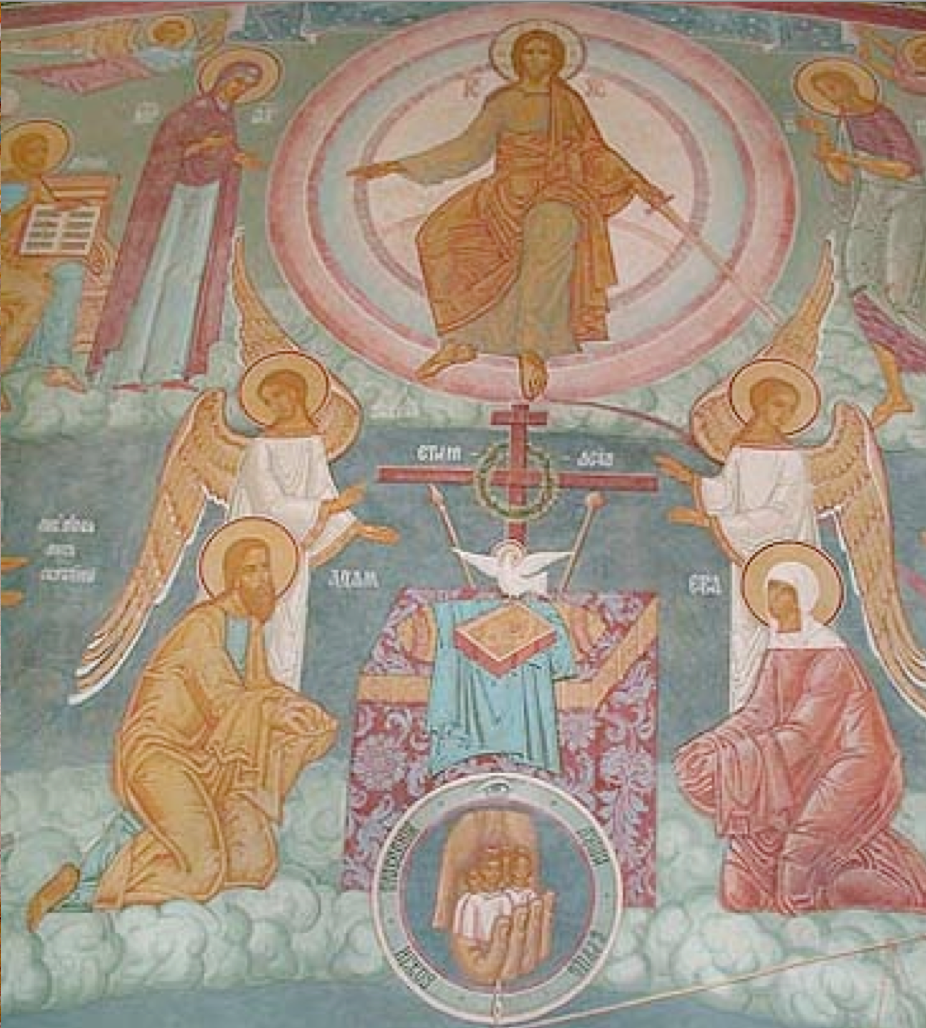 A depiction of the Second Coming with Jesus riding on a cloud ship ‘anchored’ by the Etimasia or assembled Ark of the Covenant.

Known since the second century as the Throne of Christ, but mostly unknown to modern Christians, tradition and Second Coming or Last Judgment art makes clear the Etimasia (Greek for ‘preparation’) is Jesus’s property and it is not on the planet. However, it will be when Christ returns.

Once fully assembled, and properly activated , this kit forms a “resurrection machine”. The Lord appears above the device in a cloud of mist and beams as a luminous, humanoid figure with a rainbow light radiating all around. Reading the accounts, we can see that the Lord beams in and then beams or radiates Divine Light.

This is why I call it a beaming device. Dr. Mitchell believed it was a zero point energy device.

Forget about all the other images of the Ark that you’ve seen. It is not a radio or a weapon ala Indiana Jones.

Think of this Ark as a ‘beaming’ device similar to Star Trek, only spiritualize it by recognizing that ‘angelic consciousness’, or what I call Ascension Intelligence, is the key component to make it work.