It appears that there is significant evidence that suggests that all ancient cultures were connected by a powerful religious symbol. Researcher and author Richard Cassaro refers to it as the ‘God Self’ Icon and highlights its presence in pyramid building civilizations.

What if major ancient civilization on our planet were somehow interconnected? What if there is a lost knowledge present in mankind’s amnesic past that is only resurfacing now?

There are countless indicators present among many ancient cultures that suggest ancient civilizations that existed thousands of years ago on Earth were intricately connected.

This is exactly what Richard Cassaro suggests in his book ‘The missing Link’ where the author offers over 500 fascinating images as evidence of a fundamental role that the mysterious symbol would have had in cultures as the ancient Egyptian, Chinese, Sumerian, Greek, Inca, or Persian, among many other.

The same way the symbol of the cross unified Christians in a single religion, the icon of the ‘God Self’ may have done the same thing for ancient civilizations thousands of years ago.

The power of ancient symbols

But what are symbols and since when have they become so important? Simply put, symbols are basically figures or patterns that have a conventional meaning.

However, many researchers indicate that this definition is incomplete and that its purpose needs to be reevaluated.

The power of persuasion and conviction of the symbol lies in the fact that through the image senses are experienced, through them a vital anthropological experience comes to life in which the interpreter is FULLY involved in.

At the time of the interpretation, the subject must provide its own piece of imagination which acts as a medium by which the eventual meaning unfolds, meeting resonances and echoes that help awaken the sense, becoming the architect of a spiritual temple inside oneself.

Cassaro explains that from this perspective, numerous ancient cultures left behind more than just a universal secret embodied in art and architecture and one of the greatest pieces of evidence supporting this idea is the ‘God Self’ icon discovered by Richard Cassaro. 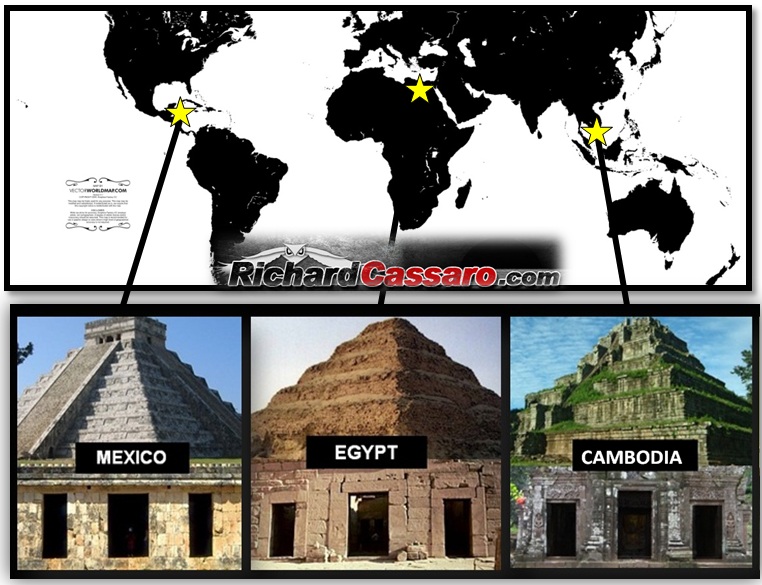 However, symbols are present everywhere, and some of them remain hidden even though they are in plain sight.

It is important to mention that parallels between different constructions of antiquity, present in distant cultures both temporally and spatially, are surprising, especially when you consider that most of these ancient cultures never had contact with each other –or at least that’s what mainstream scholars indicate.

It turns out that the Freemasons knew about this and ever since they emerged in the early eighteenth century, they tried to immortalize the secret knowledge of a universal religion in Gothic cathedrals.

It is very common to observe a standard design present in many medieval buildings where we can observe a large central door flanked by two smaller entrances and two towers on either side of a central corridor. This is what Cassaro calls TRIPTYCH designs.

The central door is the ‘source of the ‘soul’ inside the body. The twin doors on each side represent the opposing forces of duality that the soul must confront and dominate life.

Cassaro further explains that just as with the tryptic temples, the icon of the ‘God Self’ represents the soul of the wise who symmetrically holds two identical objects but virtually opposite to each other giving balance to the force of duality through the cultivation of physical and mental energy.

The origins of the ‘God Self Icon.’

The origins of the ‘God Self’ icon can be traced back thousands of years to what Greek mythology refers to as the ‘Golden Age’.

This ‘Golden Age’ is the initial stage of the ages where mankind lived in an ideal state or utopia when mankind was “pure and immortal “.

There are some Victorian Scholars who associated this prehistoric era with Plato’s Atlantis and with the idea that the rise and fall of great ancient civilizations are linked to natural cycles like the platonic year of 25,766 years.

From the Egyptians to the Assyrians, the pre-Incas to the Europeans, the icon is ubiquitous. Is it the lost symbol of a forgotten Golden Age religion that flourished globally in the remote past? How can it not be?

Richard Cassaro is a Journalist, speaker and author of Written In Stone: Decoding The Secret Masonic Religion Hidden In Gothic Cathedrals And World Architecture.

Find out more about Richard Cassaro by clicking here.