A team of scientists claim that they have found a mask depicting an Australopithecus afarensis, a human ancestor that could have possibly given birth in a way that combines the childbirth practices of chimpanzees and human beings. Now, researchers claim that this new finding could shed light on how modern human childbirth evolved and paved the way for large brains. The scientists detailed their findings online April 12 in the journal The Anatomical Record.

The new study reveals how the ancient relative of mankind known as “Lucy” could have given birth in a way that combines how chimpanzees and humans give birth, with newborns going through a bit of tilting in the birth canal as they were born. “What we found with Lucy was very much in between that of chimpanzees and humans,” the study’s lead author Jeremy DeSilva, a paleoanthropologist at Dartmouth College in Hanover, New Hampshire, told Live Science. 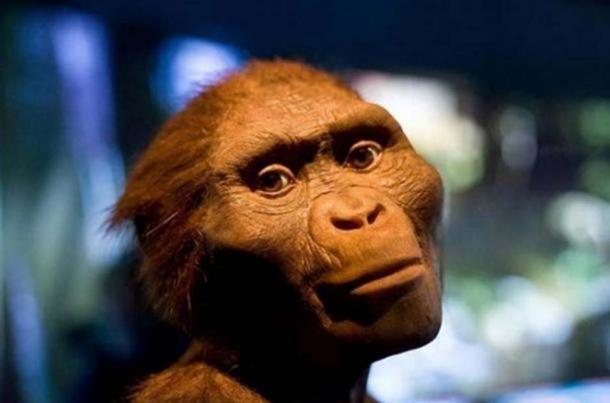 The Hidden Treasures of Ethiopia’ exhibit at Houston Museum of Natural Science featuring a model of “Lucy.” (Jason Kuffer/CC BY NC ND 2.0)

More interestingly, the scientists also noticed that there was a tight fit between the infant A. afarensis and its birth canal. This could mean that their species may have had complications during labor just like contemporary humans – and thus the presence of a midwife was probably much needed, As DeSilva said:

“Because their mechanism of birth would benefit from having helpers, it paints a picture of Australopithecus as a much more social animal, perhaps helping one another out during childbirth. The origins of midwifery may very well extend back over 3 million years.” 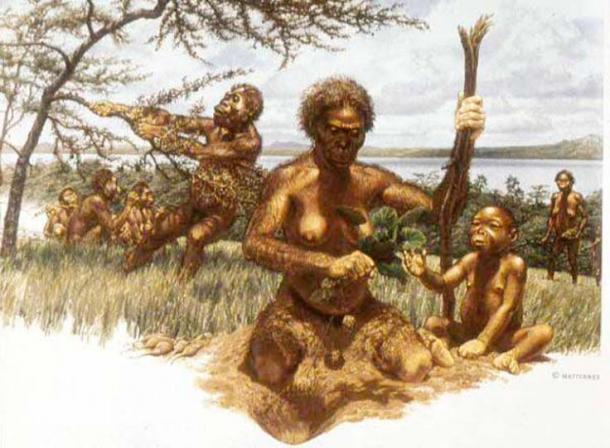 This is an artist’s representation of an ‘Australopithecus afarensis’ family. (Children in History)

Lucy, an Australopithecus afarensis, is one of the first known relatives of mankind and her species body’s structure was designed for walking upright. Previous research of how early hominins gave birth usually emphasized the baby’s head and the mother’s pelvis and ignored the newborn’s shoulders.

In this study, however, DeSilva and his colleagues noticed that humans and apes have broad, inflexible shoulders, while early hominins appear that they did as well. Personal experience helped DeSilva to examine the role that infants’ shoulders played in early hominin birth. As he stated, “With the birth of my own children, I started to get very interested in how Australopithecus gave birth and parented their children millions of years ago.”

He also told Live Science this is the first time a study focuses on the newborn’s shoulders and not its head, “This is the first time the width of the shoulders has been considered in an attempt to reconstruct childbirth in early hominins. I’m excited anytime we can take these old fossils and bring them back to life and reconstruct what our ancestors and extinct relatives were doing.”

A reconstruction of a female A. afarensis. (Public Domain)

By examining their models, the scientists noticed that, just like it happens with humans, an infant A. afarensis probably entered the birth canal sideways. Theoretically, however, a baby A. afarensis would not have to tilt too much to make way for its shoulders as its head slid down the birth canal, like for example a human baby’s head has to rotate 90 degrees during childbirth. DeSilva explained to Live Science:

“I think we have a tendency to think about Australopithecus and about Lucy as being quite ape-like. Sure, they walked on two legs, but in most other ways, we imagine them to be like modern apes. For some aspects of their life, this is probably true, but in terms of childbirth, our findings would suggest that they were more like us — not exactly like us, but more like us.” 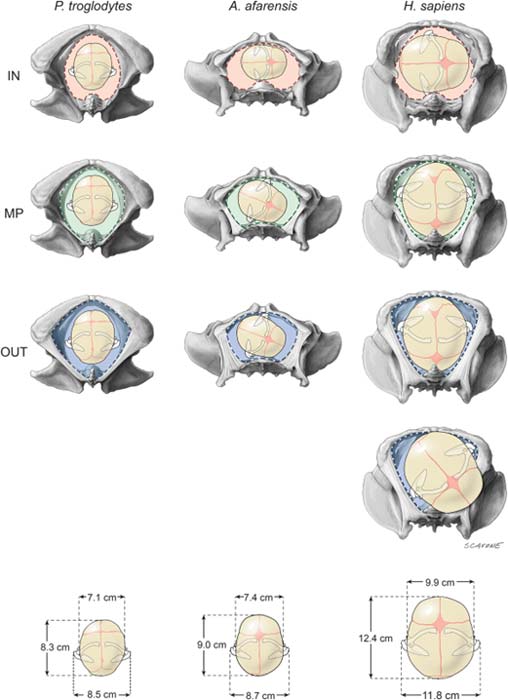 Hypothesized mechanism of birth in Australopithecus afarensis compared with birth in Pan troglodytes and Homo sapiens. (Scavone, after Tague and Lovejoy)

In conclusion, the findings of the study indicate that the progress and evolution of rotation during birth probably took place in two different stages. First, after hips designed for upright walking evolved, infants began rotating a bit in the birth canal so it could fit the head and shoulders. After, as brains would grow bigger in the human species, full rotation eventually started taking place during childbirth.

DeSilva is committed to continuing his research in the future and hopes the examination of childbirth in other hominins, such as Australopithecus sediba, will reveal more information about the evolution of birth for our kind and our predecessors.

Anyone who has never made a mistake has never tried anything new.