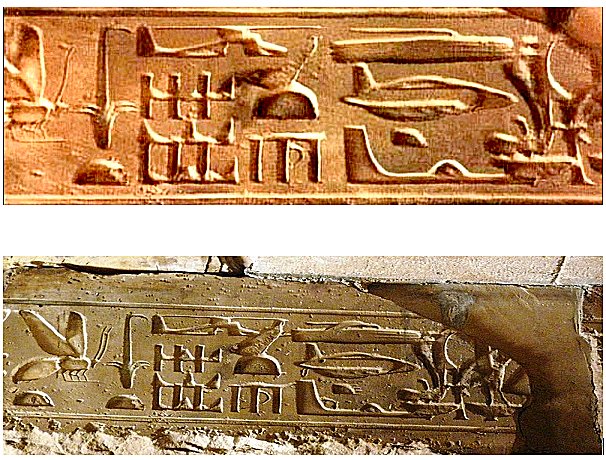 Wow. This carving – even UFO denialists do not try to deny it. The first photograph is from a UFO-related website; the second one is passed around to discredit the idea of UFOs (taken from the temple’s entry on Wikipedia.) It is found in the Great Temple of Abydos, a city which contained many temples, and itself one of the oldest ancient cities. It is still inhabited, known by its Arabic name Abidus.

Whether you believe in energy, or prefer empiricism, or are curious, but bravely non-adhering; I put forth a perspective on it that is more woo – and less – than anyone will think.

Seti was an Egyptian King and Sun-God who commissioned the building of a temple (modern-day Seti I) to honor himself, all the previous pharaohs whom Seti approved of, and the gods whom Seti himself worshiped.

The names of all previous pharaohs who had made Seti’s list were found inscribed in rock, along with depictions of Seti and his son making offerings to Seti’s gods on their behalf.

It was a giant energy-transfer machine.

“At the back of [Seti’s] temple is an enigmatic structure known as the Osireion, which served as a cenotaph for Seti-Osiris, and is thought to be connected with the worship of Osiris . . .”

A cenotaph is a “tomb” to honor one who was not buried there. Typically, cenotaphs are used to honor a fighter who has died in foreign lands. Yet, Seti was alive when it was constructed?

“It’s an ancient joke, son; it’s not meant to be ‘gotten’ by everyone – especially not by folks newer to the scene, so to speak. I’m headed this way…”

*with a light wink*

There are linguistic links between Latin, Egyptian, and Greek; all civilizations who intermingled during the height of Greek civilization; and even Arabic, whose intellectual diaspora and scholarship came from Greek roots. There are also likely links between Latin albi – Arabic abi and albiad – and even modern astronomy’s albedo – they have to do withlight and power, and are masculine terms in form, meaning, and/or etymology, respectively.

“Albedo,” in modern astronomy, specifically has to do with the ability of a body to reflect light. An object which no light can penetrate is said to be a “100% whitebody”; objects that don’t turn away incoming light are said to have no albedo, and are impossible to observe, with one exception…

Our sun, having no albedo, both produces and absorbs light. It is the brightest object in thesolar system. There are objects with hundreds of solar masses, too; shining with millions of times more luminosity than the sun… while a being could make a comparison; noting, perhaps, that such objects burn out far more quickly, the stars themselves do not compete. They are rather solitary creatures. They absorb small amounts of other stars’ light and emit their own, having no disdain for the planets orbiting them and their inhabitants, whose love of all things – alien and human – is made possible by the recurring waves of stellar formation cycles, taking place in a timescale they cannot understand, and that cannot describe itself.

Abydos – built by “one who has power,” and called himself a sun-god, worshiping, himself, the sun-gods above him…

Those who he worshiped were not gods, any more than he was himself. The stars do not want to be worshiped, either; leaving only that which does not want nor need it, and cannot speak.

All that can be worshiped is false light. Albedo. Worship is a transfer of energy. A true star needs none.

That which we seek is left mute.

Those who are worshiped…are not light, and cannot absorb it; if the dark may speak, perhaps do not attempt to worship them.

What they reflect is, also, not it. Whether someone intentionally drawing admiration, or simply a friend you admire – this is true.

Sruti, shmriti, guru – even friend – all are one when they speak. The One does not speak. And if you speak, you have separated yourself.

About the author:
This essay is dedicated to my father, Thomas A. Doerr, who fueled my young curiosity intensely with books by Arthur C. Clark

: a private and kind man. When he worshiped, he worshiped God; he did so by never engaging in worship. © Susan Doerr 2015