The Bitter Pills of NESARA And GESARA – Gregg Prescott

To what extent will people defend a lie?  NESARA is a cognitive dissonance psyop designed to find out how far people will go to defend a lie that cannot be proven.  It’s no different than the Flat Earth Theory.  NEITHER can be proven, but let’s look at the FACTS.

Here is an example of the BS that is being pumped into the minds of innocent souls.

1. Cancel all credit card debts, mortgages and other banking obligations due to illegal banking and government activities. Many call it ′′ jubilee ′′ or complete debt forgiveness.

3. Removes IRS, with IRS officers being transferred to the national sales tax area of the US Ministry of Finance.

4. Creates 17 % fixed non essential new position only income from sales tax for the government. In other words, food and medicines will not be taxed; nor used items such as old homes.

6. Returns constitutional right to all courts and legal issues.

7. Restores the original title of the nobility amendment.

8. Establish new presidential elections and elections for Congress within 120 days of GESARA announcement. The temporary government will cancel all national emergency situations and bring us back to constitutional law.

10. Creates a new arc currency of the US Treasury Ministry, supported by gold, silver and platinum precious metals, ending US bankruptcy, initiated by Franklin Roosevelt in 1933

11. Prohibits the sale of American records for birth certificates as property securities by the US Ministry of Transportation.

12. Initiates a new system of the US Finance Ministry in accordance with constitutional legislation.

15. Retrain all judges and lawyers under constitutional law.

16. Ends all aggressive military actions by the US government worldwide.

17. Establishes peace throughout the world.

19. Allows the release of more than 6000 patents of suppressed technologies that have been detained by the public under the guise of national security, including free energy, anti-gravity and sound healing machines.

20. Eliminates all current and future nuclear weapons on planet Earth.

The whole premise is based on lies. The first is the link at the end of the the above Facebook post which leads to the fake Telegram page for Melania Trump (“Official”). She doesn’t have a TG page.

Next, NESARA has been around since the 1990’s when it allegedly passed as a bill in the United States. To this day, I can’t find ONE SINGLE PERSON who can find this alleged bill. Why? Because it NEVER existed. ALL bills are public record, so you’d think it’d be easy to prove.

Could something be created to bring about what “NESARA/GESARA” wants to provide? Sure, why not? But the ENTIRE PREMISE is already based on a LIE.

This is where Cognitive Dissonance begins. Those who be-LIE-ve in NESARA will defend it to the bitter end without being able to show one shred of evidence that the original congressional bill exists at all. They’re DEFENDING A LIE!!!

Would I like to see everything that is promised on GESARA / NESARA?  Of course!  I’d also love to meet the Easter Bunny, Santa, and the Tooth Fairy. The foundation of GESARA / NESARA is what lures us all in. It’s everything that we all want but it’s based on a lie of the actual bill existing. That doesn’t pass the ultimate test of whether something is able to stand in the vibration of truth, love, and light.  If it is not the truth, then it is a lie.

Perhaps rename GESARA / NESARA into something that is not based on a lie? That, if nothing else, would remove the psyop part of it.

Here, I’ll do the research for you

I have an article called, “NESARA GESARA New Rainbow Currency” in which the below video can be found, along with ALL references.

Here are some notes from the article, “Up against ‘the dark agenda” which openly talks about the NESAR origins: 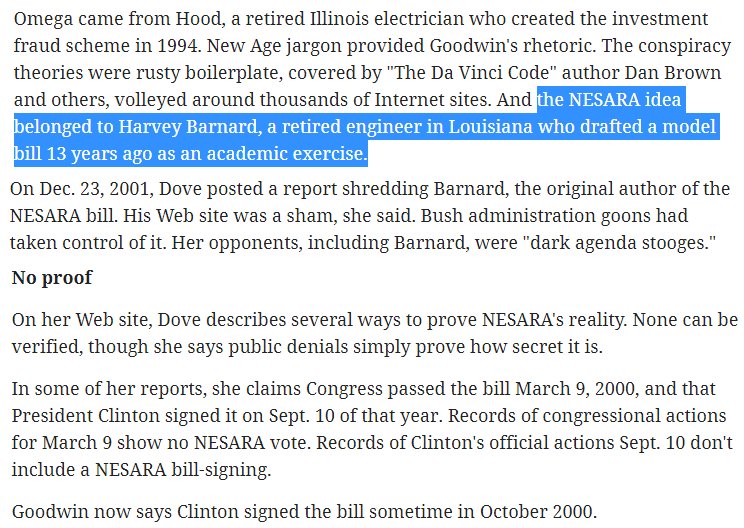 People need to ask themselves these questions 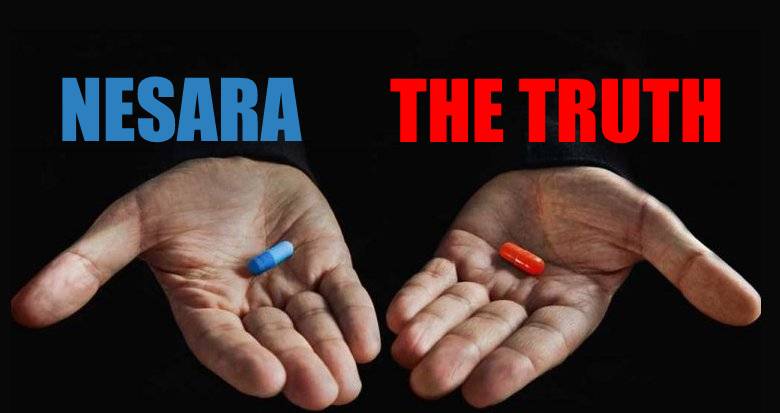 WHO is enforcing GESARA / NESARA?

Who will make all of this come to fruition?

What proof do you have of the above questions?

When this “unprecedented prosperity” is released, who will continue to work every day jobs if everyone is wealthy?

We are on the right path

Inevitably, the dollar will die and the most logical replacement would be going back to a gold/silver backed currency.

If the Roman Catholic Church is ever tried for their crimes against humanity, their corporation could be dissolved and their assets could be deployed to every person on the planet, creating abundance for all. Of course, that brings us back to the question,  who will continue to work every day jobs if everyone is wealthy?

In time, innovation will move us beyond the need for money.  Imagine if everyone owned a replicator and had access to medbeds? Why would money even be needed at that point?

I’m all in when it comes to changing reality with thoughts and intentions.  This is how the Law of Attraction works, but when the original premise is based on a LIE, it will not come to fruition unless it’s changed to something in the vibration of truth, love, and light.

People are wasting their time and energy when they invest their thoughts and energies into NESARA and the flat earth psyops. Prove me wrong. I’ll wait as long as it takes for ANYONE to show me the original NESARA bill. I’ve been waiting ever since I heard about NESARA in the early 2000’s and still, no proof.

Please, I’m begging ANYBODY to prove me wrong by providing the original NESARA Bill.  I’ve been asking and waiting for close to 20 years and NO ONE can prove it.  And if you think about it, people have been led on by this BS since the 1990’s, making it at least 20+ years of hot air and BS with absolutely ZERO proof, yet people cling onto this fairytale as if it’s the truth. How many MORE years will you wait until you realize that you’ve been lied to?

I tell you this because I love you and have the balls to speak out on this topic in the vibration of truth, love, and light.

Like Gandhi said, “Even if you are the minority of one, the truth is still the truth.”

Gregg Prescott, M.S. is the founder and editor of In5D, Zentasia, and BodyMindSoulSpirit.  He co-owns In5D Club with his fiancé, Alison Janes. You can find every episode of “The BIGGER Picture with Gregg Prescott” on Bitchute while all of his In5D Radio shows are on the In5D Youtube channel. He is a visionary, author, a transformational speaker, and promotes spiritual, metaphysical and esoteric conferences in the United States through In5dEvents.  Please like and follow In5D on Facebook and Twitter!