Canada is a large country with a great many amazing natural sights. One of the most dramatic has only been revealed in recent years, the Badlands Guardian. This is a geological wonder that appears to represent an indigenous man’s head in profile. The discovery of the dramatic and unusual geographical feature has fascinated many in Canada and beyond.

Where to Find the Badlands Guardian

The Badlands’ Guardian is near Medicine Hat in the south-east of Alberta and not far from the border with the USA. The location of the geological wonder is very remote, in an area that has been traditionally the home of the Siska First Nation People, often known as the Blackfoot tribes. The Badlands are desolate terrain of gullies, chasms, sinkholes, and hills. They were formed during the end of the last Ice Age when glacial meltwater created valleys and steeps slopes out of the sedimentary rock and clay soil. The effect of wind and water on these landscapes means that they are constantly changing. Winds and heavy rains carve channels in the rocks relatively quickly. The constant erosion of the light sedimentary soil and clay means that there are many unique and strange geomorphic features and topographies which have intrigued people since the arrival of the First Nations . Badlands are found in several areas of North America. 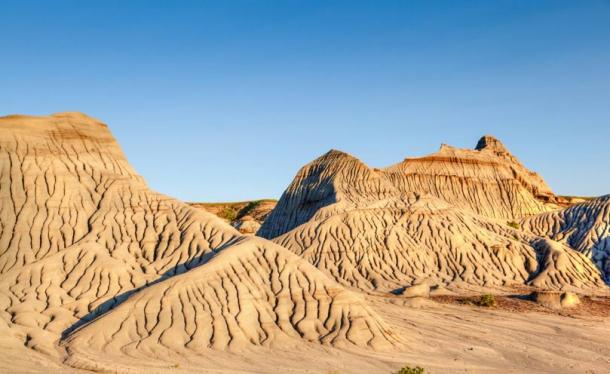 The stunning wilderness long had a spiritual significance for the Siska people and there are important First Nation archaeological sites in the Alberta Badlands. The first Europeans to settle in the Canadian prairies gave these geographical areas the name of ‘Badlands’ because they were deemed to be inhospitable and dangerous. These landscapes are difficult to navigate, and it is easy to get lost in the winding gullies. They remain untouched wilderness. These areas have also been the site for extensive dinosaur finds throughout the years.

The Story of the Guardian of the Badlands

The geological wonder, the Guardian of the Badlands was only uncovered in recent years and purely by chance. It is a geographical feature that, when seen from the air, resembles the face of an indigenous person in profile. The Indian head is looking westward and it is very large and even bigger than the heads on Mount Rushmore. It has the distinctive features of a First Nations male and it appears to be wearing traditional headwear, a feather headdress, which is synonymous with Aboriginal culture.

The geological feature was produced several hundred years ago or more, probably because a fierce storm unleashed flooding and winds that eroded the clayey soil and sedimentary rocks. The erosion left gullies and channels that have by complete chance formed the image of the Indian head if seen from a great height. No one believes that the feature was created by humans, but it is the result of natural processes. The so-called Guardian is an example of the Hollow Face Illusion, in which a concave image appears to be a convex image. The erosion of clayey soil and sedimentary rock has led to many similar geomorphic features all around the globe. An oil well and a road near the feature give the impression that the Guardian is wearing earphones, and this detracts from the overall effect of the geological wonder. 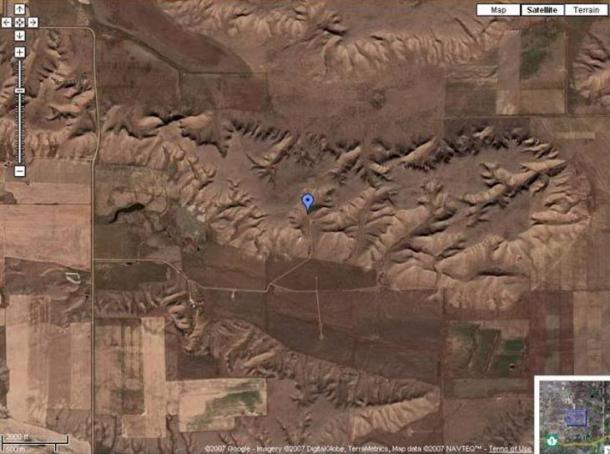 The Guardian of the Badlands as seen from above (Google Earth)

The feature was discovered during the Google Earth project when they used satellite imagery and reproduced them in 3-D which led to the identification of the natural world. The Guardian is regarded as one of Google Earth’s most remarkable finds. When it was announced that this feature was found it caused a sensation on the internet and great excitement in Canada. The name for the remarkable geological feature was selected after local residents were asked to name the feature in a competition organized by a local media outlet. The winner suggested the ‘Guardian of the Badlands’. 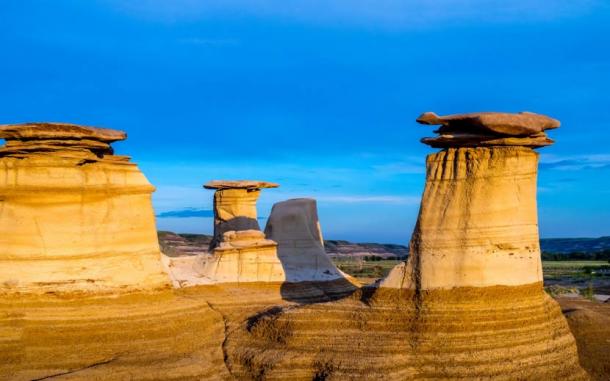 The Hoodoos found in the Badlands ( Fotolia)

If you plan to visit the area and witness this natural wonder, think again – it can only be seen from the air and at a great distance above Earth. If you are interested in visiting the Badlands, there are guided tours of the area available which would enable you to see the other remarkable geological features and landscapes. However, if you really want to see the Badlands Guardian in Alberta, simply view it on Google Earth or on the Internet.