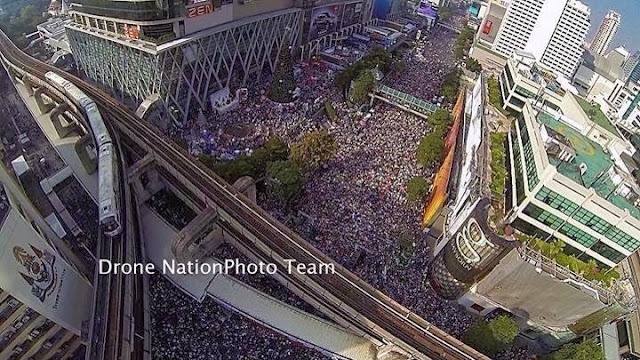 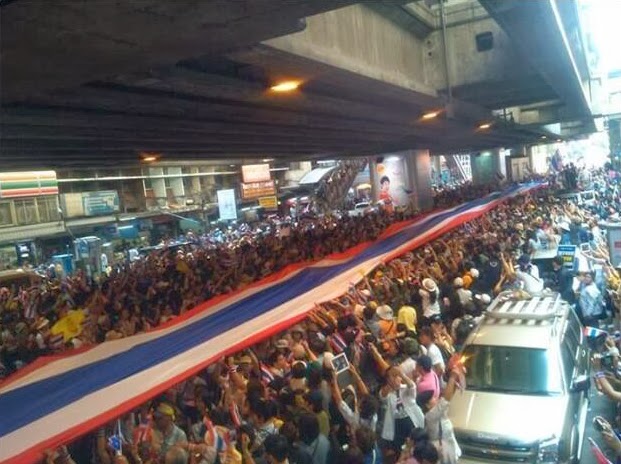 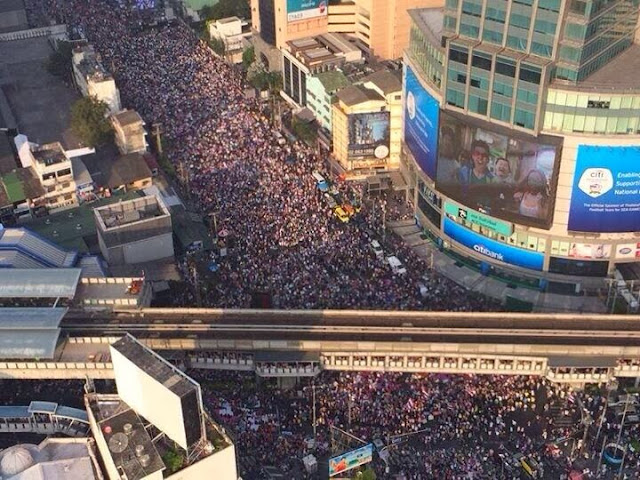 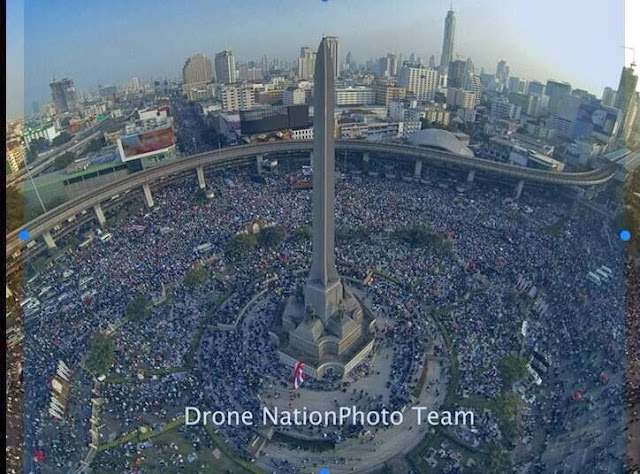 Images: (Top to bottom) Ratchaprasong, Taksin Bridge, Silom, Asoke, & Victory Monument. These are images of just some of the separate protest sites and marches organized across the city of Bangkok yesterday, December 22, 2013. Between the sites, a stream of thousands flowed as many participants sought to visit as many stages as possible throughout the day. Police dubiously claim only “135,000” turned up, when in reality the number was clearly well over a million.
….

Thousands of protesters streamed between the stages, walking, riding, or driving miles from one stage to the other. Across the city, in every place of business, the signature Thai flag, ribbons, wrist bands, and banners could be seen carried by protesters as they took breaks to eat and rest. Each protest site was filled to capacity, with a steady stream of people flowing to and from the sites throughout the day. Mass transit systems ran out of tickets and eventually opened gates to let passengers ride for free.

The regime’s police have claimed the number of protesters at 4pm was approximately 135,000 – which would still dwarf by nearly 3 times the largest pro-regime rallies at the height of its popularity years ago. However, pictures, accounts, security officials and the fact that people were constantly arriving throughout the day as others left to sustain the crowds indicate a million or more turned out. The city’s elevated train alone moved over 700,000 people, most of whom were protesters.

Meanwhile, the regime’s proxy prime minister, Yingluck Shinawatra, placeholder for her convicted criminal brother, fugitive, Thaksin Shinawatra who openly runs the country from abroad as he evades a 2 year jail sentence, multiple arrest warrants and a long list of pending court cases, has fled to Thailand’s northern provinces where the remaining stronghold of the regime’s “red shirt” mobs desperately attempt to cling to power through a campaign of fear and intimidation.

Despite overwhelming opposition, increasing awareness around the world of the cartoonish nepotism and illegitimacy of the current regime, Yingluck Shinawatra was once again placed at the top of the candidate’s list for Thaksin Shianwatra’s “Peua Thai Party” (For Thais Party) for upcoming February 2014 elections being boycotted by opposition parties.

Who are the Protesters & What Do They Want?

Real education must ultimately be limited to men who insist on knowing. The rest is mere sheep herding.