Next time you bite into a chocolate bar, think of Africa. The continent produces nearly 70 percent of the world’s cocoa, a growing output that requires carving more than 325,000 acres of new farmland from forests every year – a drop in the bucket of overall agricultural expansion there.

That expansion is the subject of a new Stanford study that provides the first comprehensive assessment of how international demand for commodity crops, such as cocoa, is affecting sub-Saharan Africa’s tropical forests, second in size only to the Amazon. The findings, published in Environmental Research Letters, suggest reason for hope if policymakers tailor decisions regarding deforestation around the region’s unique dynamics and uncertainties.

“We are starting to better understand issues related to large-scale agricultural expansion in the tropics,” said lead author Elsa Ordway, a graduate student in Stanford’s School of Earth, Energy & Environmental Sciences. “In Africa, we have the opportunity to take lessons learned from other regions and recommend preventive policies.”

In particular, the study recommends policies that would alleviate poverty in local regions and incentivize forest conservation rather than the widespread deforestation that has accompanied agricultural expansion in other regions.

As international markets have swelled and integrated, production of in-demand crops such as soy and oil palm has moved away from areas where land is scarce and where natural resource regulations are robust. Production has instead moved to tropical regions such as Southeast Asia and South America. Brazil and Indonesia alone accounted for more than 60 percent of global tropical deforestation from 2000 to 2005, largely due to agricultural expansion.

Sub-Saharan Africa, with its abundant cheap land and labor, would seem an obvious next step for multinational companies looking to expand farther. Since 2015, agricultural production in the region has grown at the fastest rate globally, and cropland is predicted to expand more than 10 percent by 2025.

Although deforestation rates in Africa remain well below those in South America and Southeast Asia, the region has lost an area of intact forest about the size of Iceland since 2000.

A Stanford study indicates that domestic demand for commodity crops has been associated with most agricultural expansion in sub-Saharan Africa in recent years, including oil palms such as these at an oil palm nursery and research facility in Cameroon. Credit: Elsa Ordway” 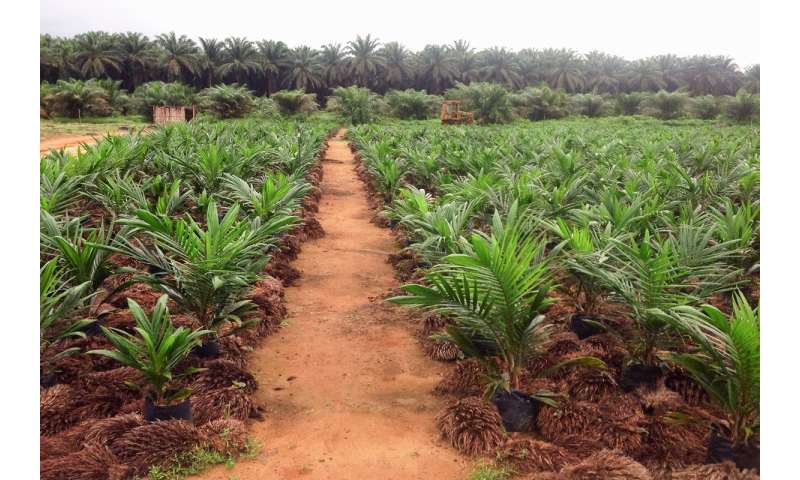 A Stanford study indicates that domestic demand for commodity crops has been associated with most agricultural expansion in sub-Saharan Africa in recent years, including oil palms such as these at an oil palm nursery and research facility in Cameroon. Credit: Elsa Ordway

These African forests, contained primarily in the Congo Basin, represent almost 30 percent of the world’s total and are an important source of local income. In addition to regulating climate, safeguarding water quality and controlling disease, the forests feed and provide subsistence means to at least 100 million people living nearby. Forest products such as logs generate an average of 6 percent of sub-Saharan Africa’s gross domestic product – triple the world average.

Expansion of commodity crop production in sub-Saharan Africa has so far been driven primarily by small- and medium-scale local farmers who boost the regional economy and can expand with less disruption to forests. But big change is knocking at the door. In recent years, multinational companies have bought up a land area larger than Costa Rica in the heavily forested Congo Basin, mostly for crops such as oil palm and soy.

As the multinationals move in, they are more likely to acquire land by clearing intact forest due to property conflicts resulting from the region’s land tenure complexities. However, the study’s authors suggest Africa could be spared the massive deforestation that large-scale monoculture has wrought on regions such as Southeast Asia by implementing policies that prioritize forest conservation and local control of the land.

“Civil society, policymakers and private companies can benefit from many years of trial-and-error with anti-deforestation policies in South America and Southeast Asia to design more effective interventions in sub-Saharan Africa,” said co-author Eric Lambin, the George and Setsuko Ishiyama Provostial Professor in the School of Earth, Energy & Environmental Sciences.

Among the possible solutions: promoting investment that ensures small and medium-scale farmers continue to drive agricultural expansion in order to alleviate poverty and avoid land tenure conflicts, encouraging shade cultivation of crops such as cocoa to incentivize forest cover conservation, and finding ways to engage African consumers – currently the primary market for most locally produced commodity crops – on deforestation issues.

“Future forest losses could be better mitigated via policies that address the shifting influence of domestic and international markets,” said co-author Greg Asner, a professor in Stanford’s School of Earth, Energy & Environmental Sciences.

In the meantime, the study’s findings could inform the zero-deforestation commitments made by dozens of international companies and help countries adhere to their commitments under the U.N. Framework Convention on Climate Change.