© vichie81/iStockphoto
by Elizabeth Deatrick
Solar storms not only cause auroras, but also electrical surges that can upset power grids.

When the lights go out, the cause is often regional: Ice storms in the northeastern United States or hurricanes in the southeast. Now, a new study shows that the upper Midwest can have its own special sort of grid-destroying storm—space weather. The study finds that this region is at greatest risk of damage from storms of charged particles from the sun, which crash into Earth and send electrical currents surging along power lines, melting transformers and triggering blackouts. According to the study, those surges could be up to 100 times more powerful in northern Minnesota and Wisconsin than in other parts of the United States.

Scientists have been trying to predict geoelectric storms for decades, but have been hampered by a lack of data. Now, researchers have created the first “geoelectric hazard” map for large parts of the continental United States. Rather than providing local recommendations for making a power grid safe or short-term warnings of big storms, this new map aims to predict where large geoelectric storms can be most severe. The map, published last week in Geophysical Review Letters, draws on data about the two biggest factors in the strength of these storms—the likely interactions of space weather with Earth’s magnetic field and the conductivity of Earth’s crust.

The goal is to help power companies prepare for the inevitable impact of geoelectric storms, says lead author Jeffrey Love, a geophysicist at the U.S. Geological Survey (USGS) in Denver. Many companies already rely on data from the U.S. government to keep their grids safe: The National Oceanic and Atmospheric Administration, for instance, provides space weather forecasts that can provide some advance notice of incoming storms. But scientists say more can be done. “I think everyone in the field recognizes the importance of looking at this problem and trying to resolve it as soon as possible,” says Chigomezyo Ngwira, a space physicist at The Catholic University of America in Washington, D.C., who wasn’t involved in the study. 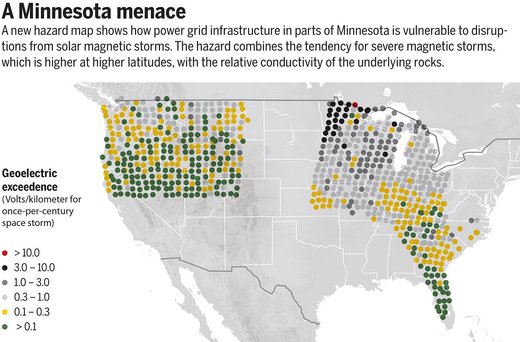 Space weather has caused problems for humanity as far back as 1859, when a massive burst of plasma ejected from the sun collided with Earth, inducing an electric current that, instead of coursing through the rock, flowed through telegraph cables. The so-called Carrington Event fried lines across North America and Europe, shocking and even burning some telegraph operators. Nowadays, electrical power grids have replaced telegraph cables, but they’re vulnerable in the same way. A recent study suggests that a solar storm as severe as the one in 1859 would cause about $2 trillion in damage today.

The new map singled out the northern edge of the Midwest—especially Minnesota and Wisconsin—as vulnerable to geoelectric storms for two reasons. First, the shape of Earth’s magnetic field causes space weather to have bigger impacts at higher latitudes. When clouds of ejected material and energy from the sun hit Earth’s donut-shaped magnetic field, some of it is deflected, but the rest is shunted toward the ground near the magnetic poles. This material interacts with Earth’s magnetic field, creating auroras and the electrical surges that flow through the planet’s surface. The closer to the poles a power grid is, the more likely it is to experience problems during geoelectric storms. Using historical data from a network of geomagnetic observation stations, the researchers were able to calculate the statistical likelihood of how strong storms could get in a given region.

But that’s not the only factor at play: Some areas of Earth’s crust are more conductive than others. Over the last few years, the National Science Foundation has sponsored a “magnetotelluric” survey of large swaths of the United States—researchers, in essence, stuck voltmeters into the ground in a grid, and measured the flow of electricity between them. These data, supplemented by work done by USGS, helped researchers build up a picture of how electricity flows through Earth’s crust. In general, rock is not very conductive, which is why the currents from solar storms often flow through the metals of power grid infrastructure to complete their circuit.

But the rock types do matter. For instance, the upper Midwest is home to two types of rock that together create a perfect opportunity for electrical currents. Sedimentary rock, which is more conductive, is underlain by dense, insulating igneous rocks leftover from a time 1.1 billion years ago when North America almost split in half and the igneous rocks rose up from below. Today, the contrast between the two layers allows for a strong, local electric current during geoelectric storms.

But not all of the United States has had its conductivity surveyed yet. Love is eager to extend the map into New England, once funding has been secured. Not only does the area have old, complex geology that could reveal unexpected conductivity contrasts, but it’s also northerly enough to receive more energy from geoelectric storms. The data could help power companies protect the grids of New York City, Boston, and other major cities, Ngwira says. “Before, we had scientists working on their own and engineers doing their own thing,” he says. “Scientists are beginning to understand what engineers need from us.”

32 Survival Skills Your Child Should Know and Be Able to Do ASAP!