Serapis (also called Sarapis) was a deity invented by the Ptolemies, and was meant to bridge the gap between their Egyptian and Greek subjects. The Ptolemies were one of the successors of Alexander the Great, and ruled over Egypt until it was conquered by the Romans in 30 BC. As the Ptolemies were a foreign dynasty, and had both Greek and Egyptian subjects, they needed to take measures to solidify their rule. One of these was the invention of the Greco-Egyptian deity Serapis.

Serapis and Osirapis: Appealing to the Egyptians

The man responsible for the creation of Serapis was Ptolemy I , one of Alexander the Great’s most capable generals, and the founder of the Ptolemaic Dynasty.

The name of this god is said to have been a fusion of the Egyptian deity Osiris and the sacred Apis bull. Prior to the coming of the Ptolemies, the cults of these two deities had already merged and a combined god, Osirapis, was worshipped by the Egyptians. Osirapis may be said to have represented the essence of ancient Egyptian religion at the time. Thus, by using these deities as the core of Serapis, the Egyptian subjects of Ptolemaic Egypt could easily identify familiar elements in the new deity. 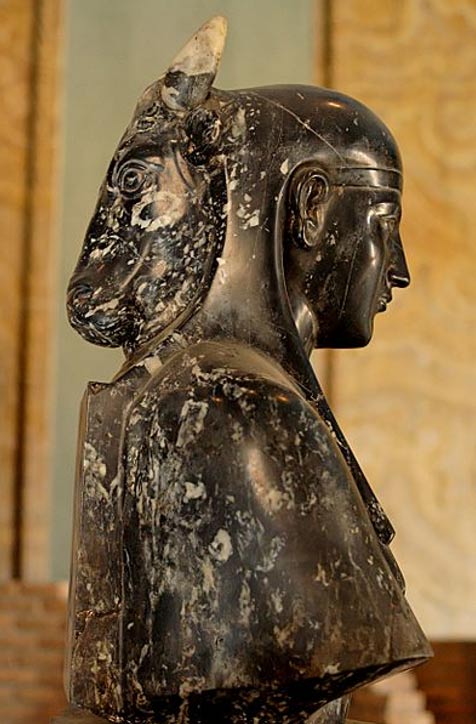 In order to appeal to their Greek subjects, a number of Greek deities were added to this Egyptian core. These deities included Zeus, Helios, Dionysus, Hades and Asklepius. By doing so, the attributes of these deities were also added to Serapis. For instance, Serapis gained divine majesty from association with Zeus and became associated with the sun through Helios. 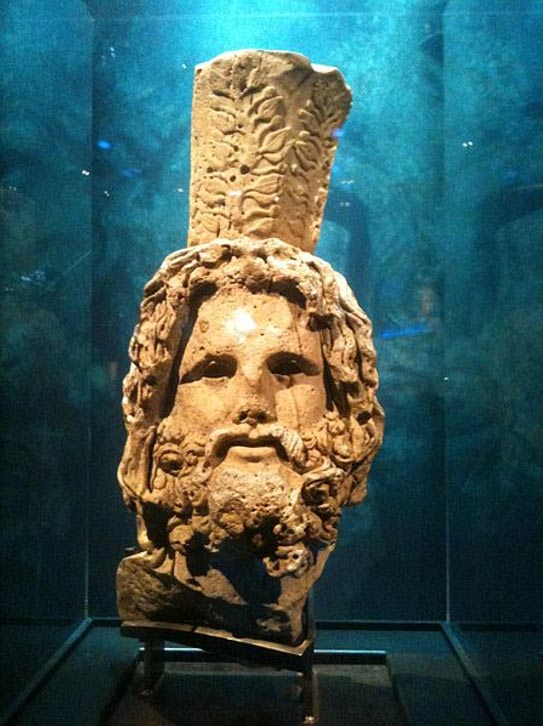 Head of Serapis from a 12 foot (3.7 meter) tall statue found off the coast of Alexandria. ( Wikimedia Commons )

Although both Egyptian and Greek deities were used to create Serapis, the deity’s final form was predominantly Greek. This can be seen in the iconography of Serapis, which was full of Hellenistic elements.

For a start, Serapis was an anthropomorphic deity, unlike the gods of the Egyptian pantheon, who were often portrayed as zoomorphic beings. Additionally, Serapis was depicted as a man wearing a Greek style robe with a Greek hairstyle and a full beard. Incidentally, Egyptian gods are usually not represented as having full beards (the god Bes is one exception). 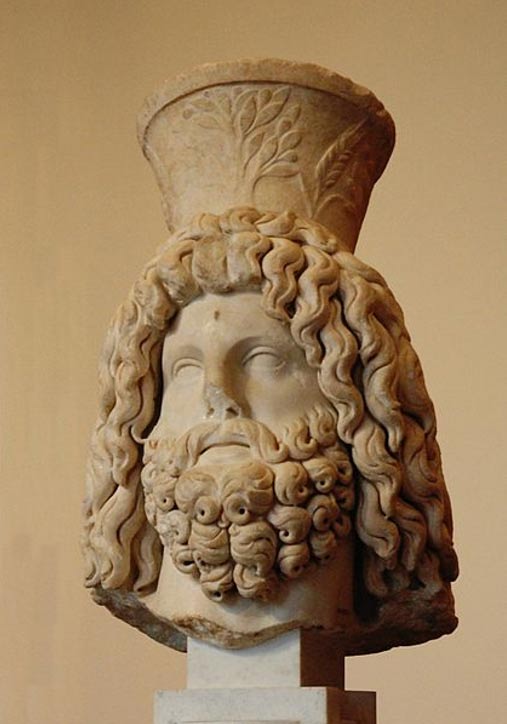 On top of Serapis’ head is a basket or a tall, dry corn measure (called a modius by modern scholars.) This was meant to symbolize his fertility attributes and also show his association with Osiris. Occasionally, Serapis may be portrayed as having a pair of curved ram’s horns. There are also instances where the guardian of the Underworld, the three-headed dog Cerberus , is placed at his feet. 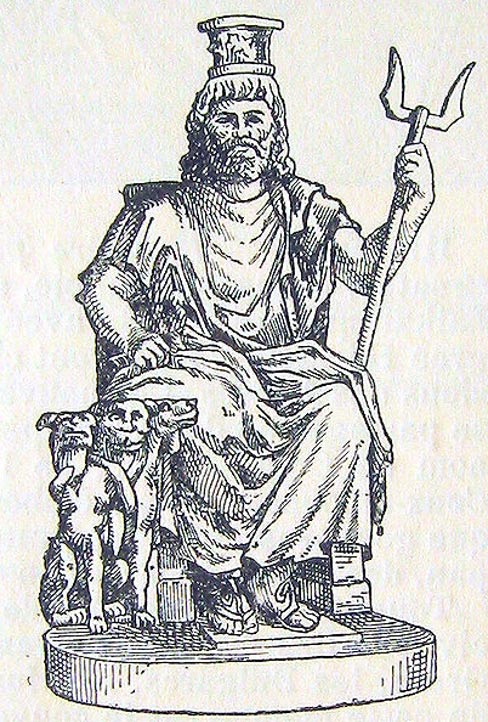 Hellenistic Serapis with Cerberus at his side. ( Wikimedia Commons )

The Rise and Fall of a Cult That Crossed Egyptian Borders

The cult of Serapis was a huge success for the Ptolemaic Dynasty, and various temples were built in Egypt for his worship. The main temple was in the Ptolemaic capital, Alexandria. According to the geographer Strabo, the Serapeum in Alexandria stood in the west of the city. Although it was an important site throughout the Mediterranean, it was “almost abandoned on account of the construction of the new buildings at Nicopolis” by the time Strabo wrote his Geography. Nevertheless, the building existed until 389 AD when it was destroyed by order of the emperor Theodosius.

Strabo also mentions other temples to Serapis in Egypt. For instance, the Serapeum in Canopus is recorded to be renowned for curing the sick:

“It contains the temple of Serapis, which is honored with great reverence and effects such cures that even the most reputable men believe in it and sleep in it – themselves on their own behalf or others for them.”

Another Serapeum is recorded by Strabo to be found in the city of Memphis . Nonetheless, the cult of Serapis, though created by the Ptolemies for a specifically Greco-Egyptian context, gained some popularity beyond the borders of Egypt as well. This is evident in a number of temples dedicated to Serapis that have been found in Italy and Turkey.

There is also evidence that Serapis made his way to Roman Britain. A foundation stone for a Temple of Serapis was found in 1770 in Yorkshire. The stone names a legate of the 6th Roman Legion, Claudius Hieronymianus, as one of the builders. And archaeologists working in Hampshire in 2017 found that Serapis was one of the three gods who had temples dedicated to them at the site by the cruel Roman Emperor Nero. Nero probably had the temple built to impress the power of Rome upon the people his army conquered.

The God Serapis was, for a time, not only appealing to the original audience, but to others as well. 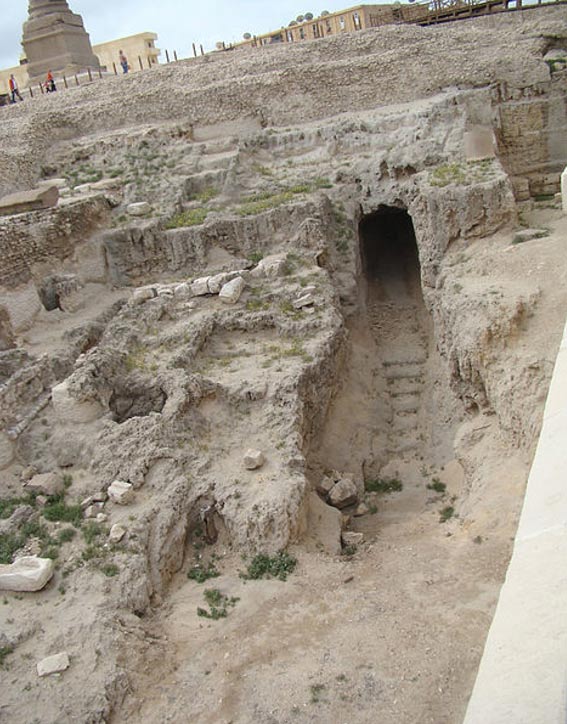