by Olivia Solon in San Francisco

Driverless trucks will be safer and cheaper than their human-controlled counterparts, but that doesn’t mean America’s 3.5 million professional truck drivers are giving up to the machines without a fight.

Across the US, truckers collectively haul more than 10bn tons of freight each year, but it’s a tough job – the hours are long and lonely, the pay is low and the lifestyle is sedentary. In many ways it’s a job ripe for disruption; robots v truckers.

“Picture the taxi drivers around the world acting in response to Uber,” says Andy Stern, the former former president of the Service Employees International Union, referring to protests and violence that erupted in many cities as the $62.5bn Silicon Valley on-demand ride-hailing firm challenged conventional, regulated taxis.

“Truck drivers will follow a similar pattern,” says Stern. “There will be disruption in different places. You can imagine people ringing state capitals with their trucks.” 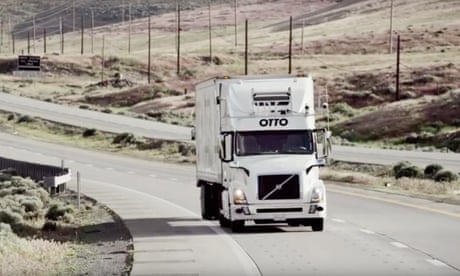 Could self-driving trucks hit America’s highways? This startup thinks so

Much has been written about the advent of the driverless car, with rival versions being developed by Google, Uber and Tesla, yet driverless trucks are likely to roll out at scale much sooner. “Individuals can make their own choices about whether they want to get into a driverless car or taxi, but labour-saving technology will be deployed by businesses much quicker,” explains Stern, whose book Raising the Floor explores the need for a universal basic income as technology replaces jobs.

Now the race is on to put driverless trucks on public roads. In May 2015, the first self-driving truck hit the American road in the state of Nevada, and there have been several tests around the world since then including a convoy that drove across Europe to the port of Rotterdam in April. That convoy used a new automated driving technology called platooning, which connects trucks using Wi-Fi, sensors, GPS and cameras. The leading vehicle dictates speed and direction, while the rest automatically steer, speed up and slow down in close convoy.

In San Francisco, former Googlers have launched a startup called Otto, which promises to retrofit vehicles with driverless capabilities for just $30,000. The average trucker’s wage is around $40,000 per year.

Despite these developments, the trucking industry plays down the threat of disruption, arguing that people will still be needed behind the wheel for complex manoeuvres and oversight. “You are not going to see a truck without a driver in it for a long time,” says Ted Scott from the American Trucking Associations. “The human being is an excellent driver 99.9% of the time. It’s just a tiny instance every now and then that causes a problem. Computers break down more than that.”

It’s regulation, and not technology that stands in the way of eliminating people from behind the wheel

Furthermore, Scott argues, public perception remains a problem. “People generally don’t like to drive around trucks even when they have a driver in them. Now you start telling them there is no driver in that truck?”

Sam Elitzer, founder of professional truckers’ network TruckersReport, is more cautious. Ttechnologies introduced to trucks, such as automated braking, haven’t worked as expected, but these problems will be ironed out given the brains and money investing in the trend. “Some people in the industry are very confident that the software and technology will not be able to replace them. There’s a strong undercurrent of denial there,” he says.

The potential saving to the freight transportation industry is estimated to be $168bn annually. The savings are expected to come from labor ($70bn), fuel efficiency ($35bn), productivity ($27bn) and accidents ($36bn), before including any estimates from non-truck freight modes like air and rail.

It’s regulation, and not technology that stands in the way of eliminating people from behind the wheel. Although trucking companies are likely to lobby hard for the legal reform so they can save on labor, which represents an estimated 34% of operational costs per mile, Morgan Stanley conservatively estimates that the freight industry could save as $168bn annually by harnessing autonomous technology – $70bn of which would come from reducing staff. 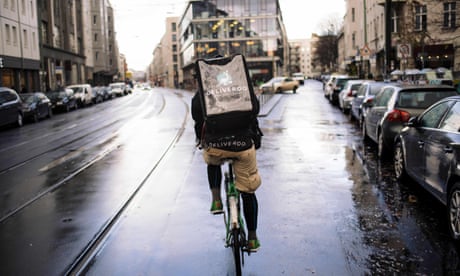 The truth about working for Deliveroo, Uber and the on-demand economy

In addition to cost savings, fleets of automatedtrucks could save lives. Crashes involving large trucks killed 3,903 people in the US in 2014, according to the National Highway Traffic Safety Administration, and a further 110,000 people were injured. More than 90% of the accidents were caused at least in part by driver error.

What next for drivers?

Where does this leave the 3.5 million truckers whose livelihoods depend on the need for a human behind the wheel? And what of the millions more whose livelihoods depend on the truckers coming up and down the country, stopping for food, drinks and sleep? “It’s going to be a huge problem,” says Stern, pointing out that unlike the steel and automotive industries, trucking is not concentrated to a few regions. “It’s the largest job in 29 states.”

Even if just a small percentage of these jobs evaporate, there could be trouble. Elitzer points out that truckers are already complaining that companies are offering insufficient wages as salaries haven’t kept up with rises in living costs – even though there’s a shortfall of 30,000 truck drivers in the US.

“A real wage decrease has occurred even when these companies can’t find enough people to drive trucks. What happens if even 10-20% of jobs are reduced by fully automated driverless trucks? That’s what worries many drivers,” he says.

Although the US trucking industry isn’t unionized in the way it is in Europe, Stern predicts spontaneous independent action. He mentions the violence that erupted in France over employment law reforms in May, which has seen lorry drivers block refineries and fuel depots, causing a widespread chaos.

These efforts will, however, ultimately be futile, he believes. “We’ve seen intense protests like Occupy Wall Street and the anti-war movement, but eventually the world moves on and taxi drivers become Uber drivers.”

The shift will lead to a critical discussion about employment, welfare and universal income. “It’s going to be the tipping point of when politicians are going to start talking about how technology is disrupting jobs in our country,” says Stern.

But trucking is just the tip of the iceberg. We’re seeing automation of labor across every industry, including manufacturing, wealth management and medicine. GDP is rising but no longer producing wage growth. We’re heading towards mass unemployment at the hands of technology.

“There are all the warning signs that a tsunami is coming. People are putting up sandbags by going to get a college education or a skill. That might be fine when there’s a storm coming, but when there are 30ft waves, sandbags aren’t going to save you any more,” says Stern.

When the tsunami hits, the wealth will need to be redistributed through something like a universal basic income, or the disparity between the “haves” and “have nots” will create enormous social friction. “From a business person’s perspective it’s about risk management. Do you want to ride around in an armored car and have guards with you? Do you want the Hunger Games? Or do you want a more fair and just society?” says Stern.

To those who believe it won’t happen to their industry or company, Stern has these words of comfort: “Maybe they are right. But when you look at the mining trucks on the roads or the convoy driving across Europe, I wouldn’t bet against it.”

A Return to Source – Micheila Sheldan

Letters to Rothschild, the Pope and the Queen – Cindy Kay Currier

Going Off Grid: 5 Inspiring And Affordable Ways To Live Off The Grid

China bans all imports of shellfish from U.S. West Coast.

The people are waking up.

Who Are You – The Who

The Hidden Controllers Of The Matrix

The Mysterious THIRD EYE You Didn’t Know You Had

Burzynski: Cancer Is Serious Business, Part I by Eric Merola

This is How Humans Are Energy Conductors for the Anunnaki

The Chilling History of Monsanto’s Rise to Power

Former Minister of Defense: World leaders are COVERING UP evidence of Alien Visitations