If the “mirrorverse” exists, upcoming experiments involving subatomic particles could reveal it.

At Oak Ridge National Laboratory in eastern Tennessee, physicist Leah Broussard is trying to open a portal to a parallel universe. She calls it an “oscillation” that would lead her to “mirror matter,” but the idea is fundamentally the same. In a series of experiments she plans to run at Oak Ridge this summer, Broussard will send a beam of subatomic particles down a 50-foot tunnel, past a powerful magnet and into an impenetrable wall. If the setup is just right — and if the universe cooperates — some of those particles will transform into mirror-image versions of themselves, allowing them to tunnel right through the wall. And if that happens, Broussard will have uncovered the first evidence of a mirror world right alongside our own.

The mirror world, assuming it exists, would have its own laws of mirror-physics and its own mirror-history. You wouldn’t find a mirror version of yourself there (and no evil Spock with a goatee — sorry “Star Trek” fans). But current theory allows that you might find mirror atoms and mirror rocks, maybe even mirror planets and stars. Collectively, they could form an entire shadow world, just as real as our own but almost completely cut off from us. 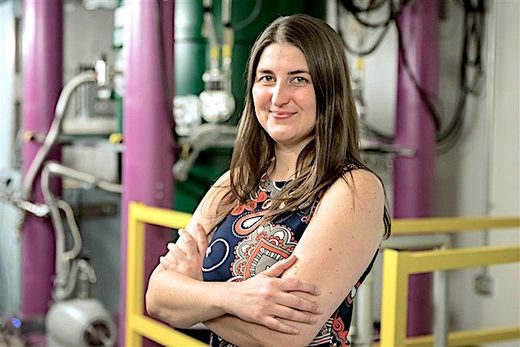 Broussard says her initial search for the mirror world won’t be especially difficult. “This is a pretty straightforward experiment that we cobbled together with parts we found lying around, using equipment and resources we already had available at Oak Ridge,” she says. But if she unequivocally detects even a single mirror particle, it would prove that the visible universe is only half of what is out there — and that the known laws of physics are only half of a much broader set of rules.

“If you discover something new like that, the game totally changes,” Broussard says.

As with many grand scientific quests, the hunt for mirror matter grew out of a small, seemingly esoteric mystery. Starting in the 1990s, physicists developed high-precision experiments to study how neutrons — particles found in the nuclei of atoms — break down into protons, a process related to radioactivity. But those experiments took a strange turn.

Researchers found that neutrons created in particle beams, similar to the one Broussard will use, last 14 minutes and 48 seconds, on average, before “decaying” into protons. But neutrons stored in a laboratory bottle seem to break down a bit faster, in 14 minutes and 38 seconds.

Ten seconds might not sound like much, but the actual difference should be zero: All neutrons are exactly the same, and their behavior should depend not one bit on where or how they are examined.

“I take discrepancy very seriously,” says Benjamin Grinstein, a particle-physics expert at the University of California, San Diego. “It’s not just between two experiments. It is a collection of many experiments done independently by several groups. The newest experiments, conceived in part to resolve the disagreement, have “only made it worse,” he adds.

Grinstein has explored the possibility that some neutrons are unexpectedly breaking down into particles other than protons but has found nothing so far. Mirror matter offers a more elegant, if somewhat bizarre, explanation.

A decade ago, Anatoli Serebrov of Petersburg Nuclear Physics Institute in Russia introduced the idea that ordinary neutrons sometimes cross over into the mirror world and transform into mirror neutrons. At that point, we could no longer detect them — it would be as if some of the neutrons simply vanished. “That would make the neutron lifetime look wrong,” Broussard explains, because some of the neutrons would have been disappearing from the test equipment while the researchers were studying them.

Connect the dots, and you reach a far-out conclusion: The neutron experiments might look screwy because physicists unwittingly opened a portal to the mirror world.

Through the looking glass

Broussard’s goal is to find out if that portal really exists and, if so, to open it in a methodical way. That’s where her neutron beam and impenetrable wall come in.

Oak Ridge has an 85-megawatt nuclear reactor that can shoot out billions of neutrons on demand, so getting enough raw material to work with isn’t an issue. The hard part is figuring out how to make some of the neutrons cross over into the mirror world, and then prove to her skeptical colleagues (and to her skeptical self) that it really happened.

Running the experiment will take about one day. Collecting the data and weeding out every possible source of error might then take a few weeks more. Broussard is looking for any telltale neutrons that managed to get past the barrier by turning into mirror neutrons, then turning back. “It all comes down to: Are we able to shine neutrons through a wall?” she says. “We should see no neutrons” according to conventional physics theory. If some of them show up anyway, that would suggest that conventional physics is wrong, and the mirror world is real.

Meanwhile, Klaus Kirch is working on a complementary experiment at the Paul Scherrer Institute in Zurich. His plan is to capture slow-moving neutrons, hit them with a magnetic field and then count to see if all the particles are still there. “If some neutrons oscillated into mirror-neutrons, they would disappear from our apparatus,” he says. Kirch’s team has already run the experiment and hopes to have their results analyzed later in the summer.

Life on the far side

Despite their conceptual simplicity, both Broussard’s and Kirch’s experiments are extremely delicate undertakings, dependent on assessing the strange behavior of a few subatomic particles within a crowd of billions. Other researchers have proposed that there might be more blatant signs of a mirror world. We might be seeing it everywhere in the sky.

Since the 1970s, astronomers have deduced that the universe is packed full of “dark matter,” a substance that cannot be observed directly but whose powerful gravitational pull helps keep galaxies from flying apart. The latest analyses indicate that dark matter outweighs visible matter by a factor of five. Yet dozens of intensive searches by astronomers around the world have failed to identify what dark matter is made of.

Zurab Berezhiani, a physicist at the University of L’Aquila in Italy who has conducted his own mirror neutron searches, offers an intriguing explanation: Dark matter has been hard to find because it is hidden away in the mirror world. In this view, dark matter and mirror matter are one and the same. If so, the mirror world is not just ubiquitous, it is far more massive than our own. At a recent physics conference, Berezhiani expanded on the idea, outlining a possible parallel reality full of mirror stars, mirror galaxies and mirror black holes. Maybe even dark life?

“Dark people is probably a bit farfetched,” says Broussard, who confesses that these ideas push her right to the edge of her comfort zone. “But dark matter is very likely as rich as our own matter. This kind of thing needs to be explored.”

If she can open a passage to the mirror world at Oak Ridge, that will be one heck of a start.