This previously unknown place was inhabited about 10,500 years ago by Native Americans who were most likely hunter-gatherers.

Our ancestors gathered each year near the Beaver River in what is now western Oklahoma. There, they funneled bison into narrow, dead-end arroyos — steep gullies cut into the hillside by the river — where they killed them en masse, sliced off the choicest meat and left behind piles of skeletons.

Today, there is very little visible evidence of these human activities that took place in ancient times. 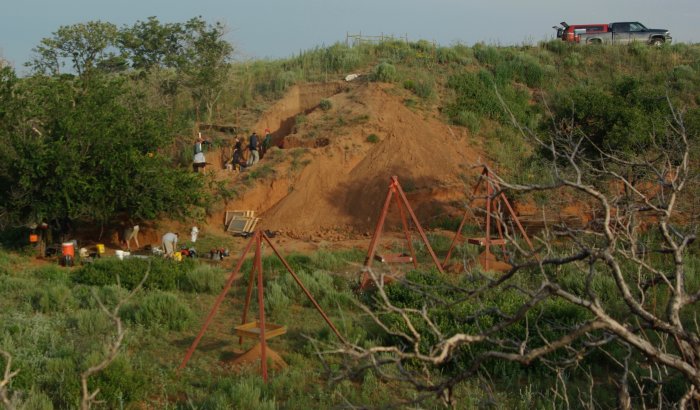 An archaeological team led by University of Oklahoma’s Lee Bement excavates a 10,500-year-old bison kill site near the Beaver River. Using lidar scanning, the team was able to narrow down sites to search further for prehistoric artifacts.
Credits: Lee Bement

Few bison remain, and dirt and rocks have filled in many of the arroyos.

However, airborne laser scanning (LiDAR) technology offers archaeologists new opportunities to discover ancient places, fossils and bones that have remained hidden below the surface for thousands of years.

Archaeologist Lee Bement said that NASA’s sophisticated tools have “been useful in delineating where we need to concentrate our efforts.”

“It saved us a lot of time and effort.”

“You’ll never find bison bones with airborne LIDAR, but you can find the geological features that suggest a place to look,” said Meg Watters, a remote sensing expert.

Dubbed as Teledyne Optech Lidar, the device recreated a 3-D model of the surface including glass, bushes and trees. It also has the ability to create a “bare-earth” version. Consequently, this allows scientists to “see structures or features that were so overgrown that they wouldn’t be obvious at all to someone on the ground,” says Paul LaRoque, vice president of special projects at Teledyne Optech.

NASA’s LIDAR technology has been used on several other occasions and helped lead to several other highly touted discoveries in recent years, including pinpointing the site of the legendary lost “Ciudad Blanca” in Honduras and a mysterious ancient spiral structure and buried towers at Angkor Wat.