Not a shred of credible evidence suggests Russia or its nationals had anything to do with downing Malaysian Airlines Flight 17 (MH17) on July 17, 2014 in eastern Ukraine airspace, all passengers and crew members perishing at the time.

So-called Joint Investigation Team (JIT) member countries Australia, Belgium, the Netherlands, and Ukraine (US sponsored Kiev regime) in cahoots with the US and NATO falsely claimed otherwise. Russia and Malaysia were excluded from the probe.

Based on its own investigation, Russia’s Defense Ministry earlier revealed that the serial number obtained from fragments of the Soviet-era Buk missile used to down the aircraft “indicate(d) that the engine was manufactured in the Soviet Union back in 1986.”

By 2011, missiles manufactured in that year “were withdrawn from service, written off or scrapped,” adding:

“The sole reason why the JIT stays quiet about the origin of the missile engine manufactured in 1986 is the missile more than likely belonged to the Ukrainian armed forces.”

Clearly Russia had nothing to do with downing MH17, nor did Donbass freedom fighters. The incident had US and Kiev fingerprints all over it.

A classic false flag, a longstanding US specialty, MH17’s downing occurred in Ukrainian airspace at a time regime forces waging war on Donbass were being soundly beaten.

Five years later, the Big Lie about what happened persists, ignoring what’s obvious. What possible reason would Russia have to down a commercial aircraft anywhere?

The Obama regime and Kiev putchists it installed clearly benefit from blaming Russia for what no credible evidence suggests it had anything to do with.

Placed on an international want list, a show trial with them in absentia is scheduled for March 9, 2020, the above individuals falsely charged with murder.

“(w)e are still gathering new data for investigation, because we will start prosecuting now, but the investigation will continue.”

“Today, we will send out international arrest warrants for the four suspects that we will prosecute,” adding:

“They will also be placed on national and international wanted lists. Because of that, we (are) reveal(ing) their full names…show(ing) you their pictures” — despite no credible evidence of their involvement in what happened.

No Russian missile crossed the Ukrainian border, its Defense Ministry stressed, the missile used given to Ukraine in 1986, identified by its serial number, as explained above.

The above-named JIT suspects are convenient patsies, wanting them and Russia blamed for what the US and Kiev were responsible for. 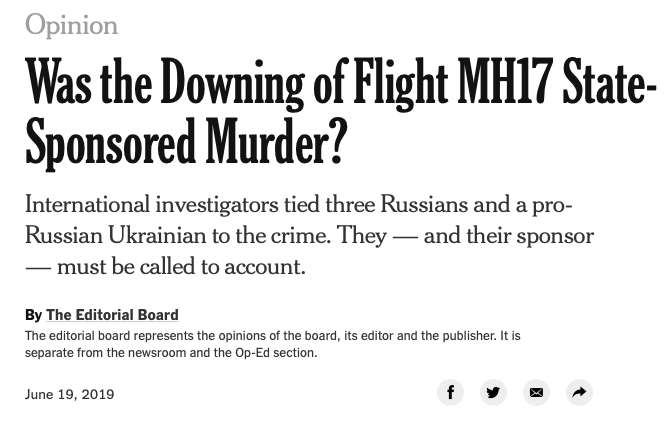 Russophobic NYT editors jumped on the falsified JIT accusations. Turning truth on its head, they said the following:

“In Vladimir Putin’s Kremlin, lying — willfully, methodically, shamelessly — is the default response to any accusations of wrongdoing” — a longstanding US, NATO, Israeli specialty, not how Putin’s Russia operates.

The Times: “Russia’s involvement  (in downing MH17) has long been clear” — a bald-faced Big Lie.

The Times: “(A) Russian missile launcher belonging to an active Russian military unit was driven into eastern Ukraine and used to fire a Buk missile at the Malaysian jumbo jet” — another bald-faced Big Lie.

Because of its global reach, the Times is the closest thing to an official US ministry of propaganda, carpet-bombing its readers with falsified official narrative rubbish in lieu of high journalistic standards the way they’re supposed to be.

The Times and other establishment media abandoned them long ago, giving yellow journalism they feature a bad name.

Note to readers: please click the share buttons below. Forward this article to your email lists. Crosspost on your blog site, internet forums. etc.

Award-winning author Stephen Lendman lives in Chicago. He can be reached at lendmanstephen@sbcglobal.net. He is a Research Associate of the Centre for Research on Globalization (CRG)

His new book as editor and contributor is titled “Flashpoint in Ukraine: US Drive for Hegemony Risks WW III.”

Visit his blog site at sjlendman.blogspot.com.

Embrace Freedom with Press For Truth

If You Don’t Know What DARPA Is, You Should Probably Read This