What if virtual reality wasn’t just a new way to play games or watch movies? What if the technology wasn’t just creating new methods of communication, of medical treatment, of military training?

What if virtual reality was used in the pursuit of mayhem?

Much has been said about the positives of technology that can reshape reality or even create a new one, but last month two respected academic researchers held a talk at South by Southwest in Austin to explore not just those positives, but also the potential negatives of reality technology.

“This is a scene from a movie from the 1940s called Gaslight,” Todd Richmond told the packed room, pointing to a screen showing a man and a woman standing by an old gaslight in a home. “How many people know what gaslighting is? So the term gaslighting comes from when lights used to be gas fueled. And it’s a way of driving someone into mental distress by manipulating their environment without telling them and then denying that it’s being manipulated. So the classic, the gaslight lamp lighting is that you slowly turn down the lights on your spouse because you’re trying to drive your spouse nuts. Your spouse says, ‘Is it getting darker?’ And you say, ‘No, I don’t know what you’re talking about.’ And if you do that enough over time, you would begin to freak people out.

“So is VR the perfect platform for this? The answer is, yeah, if you’re going to use it for that.” 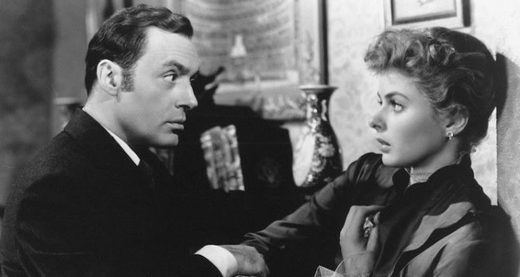 © MGM
A scene from the movie Gaslight

Richmond, who heads up the University of Southern California’s mixed reality lab, said that the teams there have been doing some “anecdotal stuff” to test out the possibilities and extent of VR gaslighting.

It’s not, he said, because the technology is directly scaring you, like with an image or video. It’s because it is manipulating your brain into thinking you’re being threatened in a very subtle way and the technology is never removing that threat.

The lack of control, or agency, over that threat, is what would substantially get under your skin.

Earlier in the talk, entitled AR/VR: The Promise and Danger Behind the Hype, USC’s director of medical virtual reality Skip Rizzo walked through some of the long-running benefits of the technology.

Despite undergoing a nuclear winter, a period of time in the ’90s defined by the first substantial attempt at the commercialization of VR and then a precipitous drop in its popularity, virtual reality never really went away. Instead the technology slipped out of the limelight created by entertainment products and instead delivered decades of use in the fields of medicine and the military.

“I’m here to say that the pro-social use of VR, particularly in education, tourism, health care, has arrived and it’s been here for a long time,” he said. “People have been doing this work since the first hype cycle of VR, which was somewhere between 1990 and 1995. People thought VR was going to change the world but for some reason by 1996 a nuclear winter for virtual reality arrived and it was viewed as a failed technology.”

That’s because, he said, the tech wasn’t ready yet.

“The vision was sound but the technology was not mature,” he said. “So then people got consumed with other things, new things, like the world wide web at the time. But some people continued their work on prosocial VR, for things like health care and education. They continued to build things, test things. And in fact, probably the largest scientific literature of any application of VR is actually in mental health and rehab.”

Virtual reality, researchers and scientists discovered, is perfect for creating environments in which to test, train, teach and treat people. That’s because the tech can be used to create the ultimate Skinner box.

Initially, virtual reality was used to treat phobias through immersive exposure therapy and once that showed the power of the tech, its use expanded to be used as a tool for intervention, scientific study, assessment and diagnosis, Rizzo said.

Rizzo’s lab has been deep in this research since 1996, he said, creating things like a virtual Afghanistan which was used to treat service members dealing with post-traumatic stress disorder. In 1997, the lab discovered that placing someone in a virtual environment for specific forms of training could have a lasting impact on them.

“You could put someone in a virtual environment, let them interact in a 3D space, and actually change how their brain functions, particularly with mental rotation,” he said. “After just 12 to 15 minutes of interaction for some, you’ll see giant gains in that mental capability.”

By 2004, the team had expanded its work, adding a number of different sorts of projects including one that dealt with the treatment of children with attention deficit hyperactivity disorder. In that particular program, a child with ADHD would be placed in a virtual classroom and then distracted with things like flying paper airplanes and the arrival of a school bus. It was a powerful tool for assessment, he said.

In 2009, they added the Kinect to a VR kit and started to use it to treat stroke victims to help them regain some function through rehab work. Four years later, and they were using VR and AI to help teach social workers how to deal with difficult, virtual patients. In a recent study, they used a more advanced version of the software to help people gain the ability to do better job interviews with virtual future bosses.

Then the sudden success of Palmer Luckey, and Facebook’s $2 billion purchase of his company in 2014, brought virtual reality back into the mainstream, primarily through games.

“That led to a giant developmental sequence of new things coming out,” Rizzo said. “Not just displays, but ways to interact in virtual world. There’s no doubt whether the gaming market is as, you know, prodigious as everybody expected it to be at this point or not. We’re seeing all kinds of popular penetration of VR. Some over-hyped things, some scary things. There’s excitement and energy even at the top levels of government.

“While the gaming industry is thank god driving this stuff, health care is going to be a beneficiary. We’re going to make a difference for people. What we can do in the virtual world is going to make a difference for people in the real world and patients are starting to get it now as well. In the last two years, more health care companies have popped up than in the previous 20 years.”

That’s the good, but from Richmond’s perspective it’s also really just the silver lining around a big, scary cloud.

The problem isn’t the technology; it’s that its adoption rate has been so relatively quick that people, society and potential consequences haven’t had a chance to catch up, Richmond said.

Horace Dediu, a noted industry analyst, created a chart in 2013 to highlight the adoption rate of smartphones in the U.S., but it also happened to chart adoption rates from 10 percent to 90 percent of technologies going back to the stove and including things like the phone, electricity and the car.

In those early technologies, you can see a steep but still relatively prolonged adoption rate. But look at things like game consoles, HDTV, the smartphone and the tablet and the lines are nearly vertical. 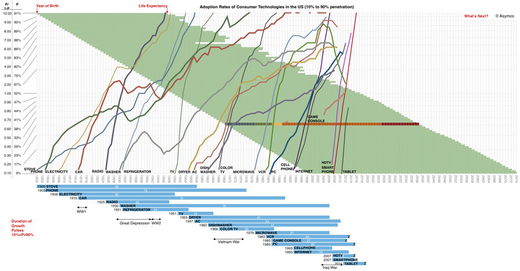 © Horace Dediu
Adoption rates of consumer technologies in the U.S

“What this means is that society writ large had a fair amount of time to adjust to these technologies, to figure out what it means, to figure out the accepted social practices, the regulation and policies so that we weren’t basically jumping into the deep end,” Richmond said. “But [with] the technologies now on this side, that’s not the case. Digital and the web hit in about the mid-’90s and now every single aspect of your life is mitigated by digital technologies. We’ve never seen adoption rates like that and we’re only now starting to see the second order effects of that.”

Richmond talked about how family members were once tricked into sending money to the Dominican Republic by someone who said that his son was under arrest. They had a lot of personal information about the family and the son. They had so much information that the family sent $1,900 to the scammers. The info all came from the internet, from Richmond’s “digital life.”

“It’s part of the unintended consequences,” he said. “With immersive technology we’re running with scissors at this point. We’ve got a bunch of clinical data that shows that it can be used for good. But the technology is agnostic and it’s the application of the technology that you have to worry about.”

The problem, he said, is that we’re entering the “internet phase” of life where things like your toaster will talk to your refrigerator, which will automatically order food for you from Amazon and a drone will deliver it before you knew it was something you needed.

“We haven’t mastered the idea of how we maintain boundaries within virtual and digital and now we’re going to start connecting all of these other systems,” he said. “So maybe it’s time to start thinking a little bit more deeply.”

That’s why, Richmond said, he and others are advocating so strongly for not government intervention, but at least a bit more government scrutiny into the ways virtual reality and other reality technologies are being used. Richmond added that he hopes that the IEEE, the world’s largest technical professional organization dedicated to advancing tech for the benefit of humanity, addresses the uses of VR specifically in its code of ethics. Currently, there simply are no rules outside of academia.

After the talk, one audience member asked if the technology was yet being developed for use as a means of torture. Both Richmond and Rizzo pointed out that current torture techniques are likely more efficient than anything a simulation can do to a person.

“It just seems like the potential for that could be pretty horrific,” the audience member pressed.

“I’ll be willing to go so far as to say that we’re really proud to be able to say we can change the brain,” Rizzo responded. “We can change behavior, do positive things to make a difference for people with disabilities or mental health conditions and all of that. But if you’re going to say that, you’ve got to accept the flip side of the coin.

“This stuff can be used in ways that change us, especially immersive interactivity. We have to watch out for this. It’s why IEEE ethics is a big deal.”