I have a lot of spiritual respect for ex Van Halen front man, Sammy Hagar. In the cover picture, he’s wearing a “Love and Light” bracelet. He “gets it” spiritually. 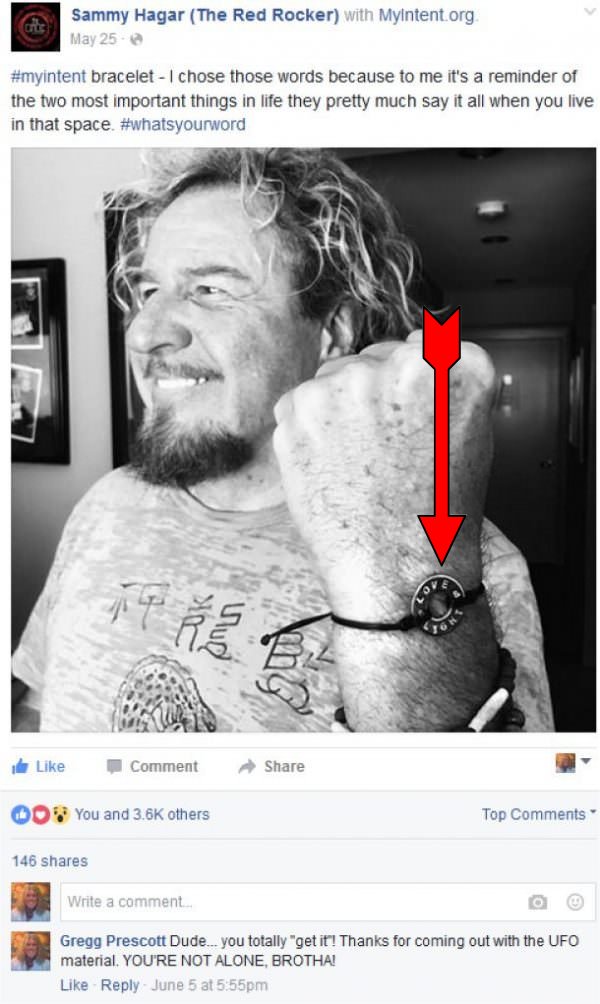 Hagar also sees things from a different perspective. At the 18:18 marker of the below video, Sammy Hagar is talking about his ex-bandmate, Eddie Van Halen: “I think Edward is an alien, if you want to know the truth. Edward’s an alien. He’s not from this planet. I couldn’t tell you which planet but everyone on the planet probably plays guitar.”

Sammy should know all about aliens. In his book, “Red: My Uncensored Life in Rock,” Hagar said he was contacted by aliens from outer space in California who tapped into his mind through a wireless connection. You can read more about this in my article, “‘Sammy Hagar’s UFO Abduction: ‘They Were Plugged Into Me’“.

But that’s not where it ends. He has also had an encounter with 9th dimensional beings who downloaded information into his brain. Hagar went on to say, “I don’t know who the f–k they are, but I’ve narrowed them down to a people called The Nine, who are called that because they’re from the Ninth Dimension. I’ve named my publishing company the Nine Music after them.”

For more on this, please read, “Sammy Hagar’s Encounter With 9th Dimensional Beings“.

If that’s not enough, he once had a dream where his father knocked on his door. His father looked “like 22 (a master number)” years old to Sammy. After Sammy got upset with his father for knocking on the door so late at night, thinking he would wake up his baby boy, he told his father to GTFO of the house. A few minutes later, in real life, he got a knock on his door. It was his sister, telling him that their father had just passed on. If you’d like to see the whole story, please read, “Rock Star Sammy Hagar Meets His Father In A Dream On The Night His Father Died“.

It takes a lot of guts for someone of Sammy Hagar’s stature to come out and speak about these topics, because most people would think he’s crazy. He’s not. There are many of us who have had these types of experiences. He simply validates them for us.

Gregg Prescott, M.S. is the founder and editor of In5D, Zentasia, and BodyMindSoulSpirit. You can find his In5D Radio shows on the In5D Youtube channel. He is a visionary, author, a transformational speaker, and promotes spiritual, metaphysical and esoteric conferences in the United States through In5dEvents. His love and faith for humanity motivates him to work in humanity’s best interests 12-15+ hours a day, 365 days a year. Please like and follow In5D on Facebook and Twitter!