“A Boeing 777-200 passenger plane, operating Malaysia Airlines Flight 17, crashed in the Ukraine, east of Donetsk. All 298 on board were killed. Flight MH17 departed the gate at Amsterdam-Schiphol Airport, the Netherlands at 12:14 hours local time, bound for Kuala Lumpur, Malaysia. It was airborne at 12:30 (10:30 UTC) from runway 36C and reached a cruising altitude of FL310 at 12:53 (10:53 UTC). Ninety minutes into the flight, at 12:01 UTC and just prior to entering Ukrainian airspace, the flight climbed to FL330. This altitude was maintained until last contact by ADS-B receivers of flight tracking websites, about 13:21 UTC.

“At the point of last contact it was flying 1000 feet above airspace that had been restricted as a result of ongoing fighting in the area. Malaysia Airlines reported that MH17 filed a flight plan requesting FL350 throughout Ukrainian airspace. However, the flight was instructed by Ukrainian air traffic control to fly at FL330.” 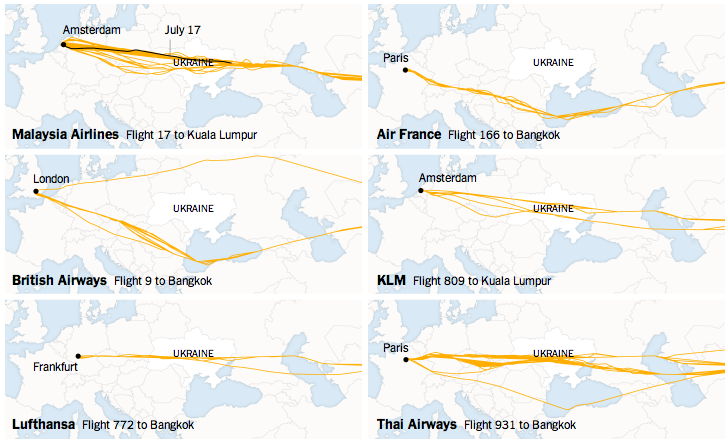 RESPONSIBILITY FOR THE CRASH:

ITAR-TASS reported in June that Donetsk defense forces seized BUK missile defence systems from an army unit operating in the region, a point repeated and echoed by NATO Supreme Allied Commander Europe General Philip Breedlove in a Pentagon press briefing on June 30. However, this was directly contradicted on July 18th by Ukrainian Prosecutor-General Vitaly Yarema, who told Ukrainian Pravda that militias do not have access to BUK delivery systems or S-300s.

On July 19, Ukrainian intelligence posted what they claim to be intercepted communications showing Russian responsibility for the downing of MH17 along with an English transcript. Numerous alternative media sources claim that the creation timestamp on the video indicates it was created before the crash took place.

The Ukraine security service also published a video on July 18th purporting to show the actual BUK missile launcher used to bring down the plane being shuttled back across the border from Ukraine to Russia. Despite the fact that there is no confirmation from any source when, where or how this video was taken, or whether it in fact shows a BUK system on a Russian transport vehicle, it has been uncritically reported on in much of the western press.

In a statement issued late in the day on July 17th, Russian President Putin said: “I want to note that this tragedy would not have happened if there were peace on this land, if the military actions had not been renewed in southeast Ukraine. And, certainly, the state over whose territory this occurred bears responsibility for this awful tragedy.”

A report originally posted to RT.com shortly after the downing suggested that the real target of the missile might have been President Putin’s plane, which was said to have been scheduled to fly over the exact same airspace as MH17 less than an hour after it was shot down. This claim has since been retracted and RT has noted that Putin has been avoiding Ukrainian airspace altogether since the recent coup took place in Kiev.

According to a report circulating widely in the alternative media, a Spanish air traffic controller working in the Ukraine on the 17th tweeted a series of messages indicating that the Ukrainian military shot down the flight and that “Kiev authorities” and “foreigners” subsequently took over the civilian air traffic control center overseeing the disputed airspace in an apparent cover-up. The twitter account (@spainbuca) of the alleged air traffic controller, “Carlos,” was then reportedly removed. [UPDATE: Global Research is now reporting that this story is likely fake and that sources indicate the tweets were being sent out of London.]

Some researchers suggest that the timing of the disaster, coming as it does right after Putin heralded the beginning of the long-awaited BRICS Development Bank is more than coincidental. This theory posits that the crash was staged by the US/EU/NATO or other powers as part of a proxy war taking place in the “new cold war” between Russia (one of the key players in an organization that is seen as a key rival to the so-called “Washington Consensus” institutions, the IMF and the World Bank) and the US.

Some have suggested that the takedown of MH17 was also related to the six passengers on board who were heading to an AIDS conference in Melbourne hosted by the International AIDS society. The theory holds that the researchers were going to question the origins of AIDS and were taken out in a similar manner to Dr. Jonathan Mann.

Yet others point to the numerology of MH17, noting “Flight MH17, a Boeing 777, first flew on 7-17-97 and crashed 17 years later, on 7-17-14.” It has also been linked to a bizarre video of a speech IMF President Christine Lagarde gave at the National Press Club in Washington on January 15, 2014 in which she repeatedly told the audience to pay attention to the “magic number 7″ and made numerological connections to WWI and other events.