“You gotta remember, establishment, it’s just a name for evil. The monster doesn’t care whether it kills all the students or whether there’s a revolution. It’s not thinking logically, it’s out of control.”—John Lennon (1969)

Yes, America, it is possible to use occupations and civil disobedience to oppose government policies, counter injustice and bring about change outside the confines of the ballot box.

It has been done before. It can be done again.

For example, in May of 1932, more than 43,000 people, dubbed the Bonus Army—World War I veterans and their families—marched on Washington. Out of work, destitute and with families to feed, more than 10,000 veterans set up tent cities in the nation’s capital and refused to leave until the government agreed to pay the bonuses they had been promised as a reward for their services.

The Senate voted against paying them immediately, but the protesters didn’t budge. Congress adjourned for the summer, and still the protesters remained encamped. Finally, on July 28, under orders from President Herbert Hoover, the military descended with tanks and cavalry and drove the protesters out, setting their makeshift camps on fire. Still, the protesters returned the following year, and eventually their efforts not only succeeded in securing payment of the bonuses but contributed to the passage of the G.I. Bill of Rights.

This kind of “power to the people” activism—grassroots, populist and potent—is exactly the brand of civic engagement John Lennon advocated throughout his career as a musician and anti-war activist.

It’s been 37 years since Lennon was gunned down by an assassin’s bullet on December 8, 1980, but his legacy and the lessons he imparted in his music and his activism have not diminished over the years.

All of the many complaints we have about government today—surveillance, corruption, harassment, political persecution, spying, overcriminalization, etc.—were used against Lennon. But that didn’t deter him. In fact, it formed the basis of his call for social justice, peace and a populist revolution.

Little wonder, then, that the U.S. government saw him as enemy number one.

Because he never refrained from speaking truth to power, Lennon became a prime example of the lengths to which the U.S. government will go to persecute those who dare to challenge its authority.

Lennon was the subject of a four-year campaign of surveillance and harassment by the U.S. government (spearheaded by FBI Director J. Edgar Hoover), in an attempt by President Richard Nixon to have him “neutralized” and deported. As Adam Cohen of the New York Times points out,

“The F.B.I.’s surveillance of Lennon is a reminder of how easily domestic spying can become unmoored from any legitimate law enforcement purpose. What is more surprising, and ultimately more unsettling, is the degree to which the surveillance turns out to have been intertwined with electoral politics.”

Years after Lennon’s assassination, it would be revealed that the FBI had collected 281 pages of surveillance files on him. As the New York Times notes,

“Critics of today’s domestic surveillance object largely on privacy grounds. They have focused far less on how easily government surveillance can become an instrument for the people in power to try to hold on to power. ‘The U.S. vs. John Lennon’ … is the story not only of one man being harassed, but of a democracy being undermined.”

Such government-directed harassment was nothing new.

The FBI has had a long history of persecuting, prosecuting and generally harassing activists, politicians, and cultural figures, most notably among the latter such celebrated names as folk singer Pete Seeger, painter Pablo Picasso, comic actor and filmmaker Charlie Chaplin, comedian Lenny Bruce and poet Allen Ginsberg. Among those most closely watched by the FBI was Martin Luther King Jr., a man labeled by the FBI as “the most dangerous and effective Negro leader in the country.”

In Lennon’s case, the ex-Beatle had learned early on that rock music could serve a political end by proclaiming a radical message. More importantly, Lennon saw that his music could mobilize the public and help to bring about change. 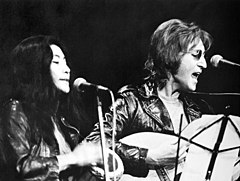 For instance, in 1971 at a concert in Ann Arbor, Mich., Lennon took to the stage and in his usual confrontational style belted out “John Sinclair,” a song he had written about a man sentenced to 10 years in prison for possessing two marijuana cigarettes. Within days of Lennon’s call for action, the Michigan Supreme Court ordered Sinclair released.

While Lennon believed in the power of the people, he also understood the danger of a power-hungry government.

“The trouble with government as it is, is that it doesn’t represent the people,” observed Lennon. “It controls them.”

By March 1971, when his “Power to the People” single was released, it was clear where Lennon stood. Having moved to New York City that same year, Lennon was ready to participate in political activism against the U. S. government, the “monster” that was financing the war in Vietnam.

The release of Lennon’s Sometime in New York City album, which contained a radical anti-government message in virtually every song and depicted President Richard Nixon and Chinese Chairman Mao Tse-tung dancing together nude on the cover, only fanned the flames of the government agents who had already targeted Lennon.

However, the official U.S. war against Lennon began in earnest in 1972 after rumors surfaced that Lennon planned to embark on a U.S. concert tour that would combine rock music with antiwar organizing and voter registration. Nixon, fearing Lennon’s influence on about 11 million new voters (1972 was the first year that 18-year-olds could vote), had the ex-Beatle served with deportation orders “in an effort to silence him as a voice of the peace movement.”

As Lennon’s FBI file shows, memos and reports about the FBI’s surveillance of the anti-war activist had been flying back and forth between Hoover, the Nixon White House, various senators, the FBI and the U.S. Immigration Office.

Nixon’s pursuit of Lennon was relentless and misplaced.

Despite the fact that Lennon was not plotting to bring down the Nixon Administration, as the government feared, the government persisted in its efforts to have him deported. Equally determined to resist, Lennon dug in and fought back. Every time he was ordered out of the country, his lawyers delayed the process by filing an appeal.

Finally, in 1976, Lennon won the battle to stay in the country and by 1980, he had re-emerged with a new album and plans to become politically active again. The old radical was back and ready to cause trouble.

Unfortunately, Lennon’s time as a troublemaker was short-lived.

Mark David Chapman was waiting in the shadows on Dec. 8, 1980, just as Lennon was returning to his New York apartment building. Ironically, Lennon had signed an autograph for Chapman earlier that evening outside his apartment building.

As Lennon stepped outside the car to greet the fans congregating outside, Chapman, in an eerie echo of the FBI’s moniker for Lennon, called out, “Mr. Lennon!”

Lennon turned and was met with a barrage of gunfire as Chapman—dropping into a two-handed combat stance—emptied his .38-caliber pistol and pumped four hollow-point bullets into his back and left arm. Lennon stumbled, staggered forward and, with blood pouring from his mouth and chest, collapsed to the ground.

John Lennon was pronounced dead on arrival at the hospital.

Much like Martin Luther King Jr., John F. Kennedy, Malcolm X, Robert Kennedy and others who have died attempting to challenge the powers-that-be, Lennon had finally been “neutralized.”

Still, you can’t murder a movement with a bullet and a madman: Lennon’s legacy lives on in his words, his music and his efforts to speak truth to power.

As Yoko Ono shared in a 2014 letter to the parole board tasked with determining whether Chapman should be released:

“A man of humble origin, [John Lennon] brought light and hope to the whole world with his words and music. He tried to be a good power for the world, and he was. He gave encouragement, inspiration and dreams to people regardless of their race, creed and gender.”

Lennon’s work to change the world for the better is far from done.

Peace remains out of reach. Activists and whistleblowers continue to be prosecuted for challenging the government’s authority. Militarism is on the rise, all the while the governmental war machine continues to wreak havoc on innocent lives.

For those of us who joined with John Lennon to imagine a world of peace, it’s getting harder to reconcile that dream with the reality of the American police state. And as I point out in my book Battlefield America: The War on the American People, those who do dare to speak up are labeled dissidents, troublemakers, terrorists, lunatics, or mentally ill and tagged for surveillance, censorship or, worse, involuntary detention. And it only seems to be getting worse.

As Lennon shared in a 1968 interview:

So what’s the answer?

Lennon had a multitude of suggestions.

“If everyone demanded peace instead of another television set, then there’d be peace.”

“Produce your own dream. If you want to save Peru, go save Peru. It’s quite possible to do anything, but not to put it on the leaders….You have to do it yourself.”

“Say you want a revolution / We better get on right away / Well you get on your feet / And out on the street / Singing power to the people.”

“If you want peace, you won’t get it with violence.”

Indeed, a revolution of any substance will not come about by way of violence. Government forces are armed to the hilt and waiting for that eventuality.

Fighting the evil of the American police state can only come about by way of conscious thoughts that are put into action. As Lennon sings in “Happy Xmas,” “War is over, if you want it.”

Do you want an end to war? Then stop supporting the government’s military campaigns. Do you want government violence against the citizenry to end? Then demand that your local police de-militarize. Do you want a restoration of your freedoms? You’ll have to get the government to recognize that “we the people”  are the masters in this relationship and government employees are our public servants.

The choice is ours.

The power (if we want it), as Lennon recognized, is in our hands.

“The people have the power, all we have to do is awaken that power in the people,” concluded Lennon. “The people are unaware. They’re not educated to realize that they have power. The system is so geared that everyone believes the government will fix everything. We are the government.”

For the moment, the choice is still ours: slavery or freedom, war or peace, death or life.

As Lennon warned, “You either get tired fighting for peace, or you die.”

John W. Whitehead is the president of The Rutherford Institute and author of Battlefield America: The War on the American People.

The original source of this article is Defend Democracy Press

In an age of universal deceit,
telling the Truth is a revolutionary act.
Whoever controls the past, controls the future.