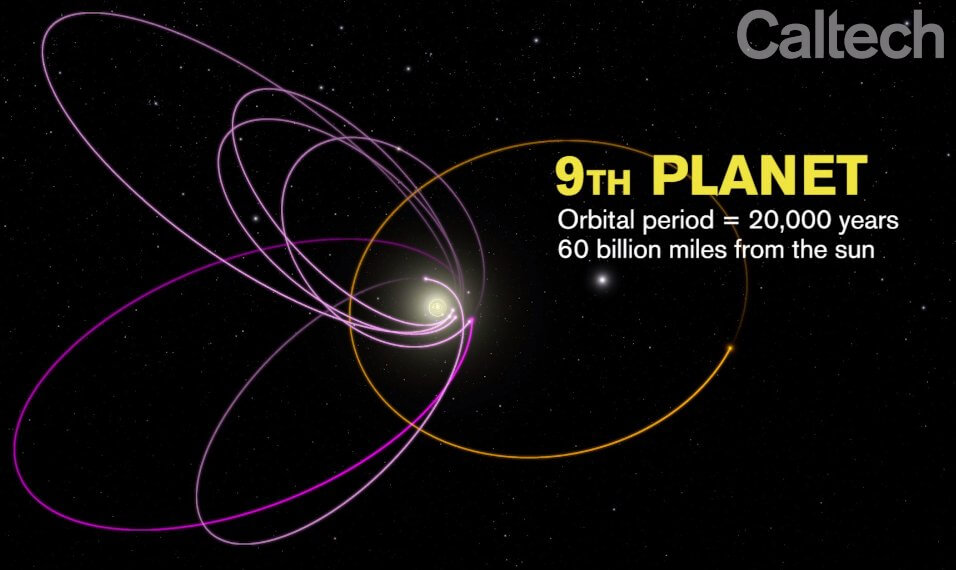 The solar system may have a ninth planet after all.

This one is 5,000 times bigger than outcast Pluto and billions of miles farther away, say scientists who presented “good evidence” for a long-hypothesized Planet X on Wednesday.

The gas giant is thought to be almost as big as its nearest planetary neighbour Neptune, quite possibly with rings and moons. It’s so distant that it would take a mind-blowing 10,000 to 20,000 years to circle the sun. 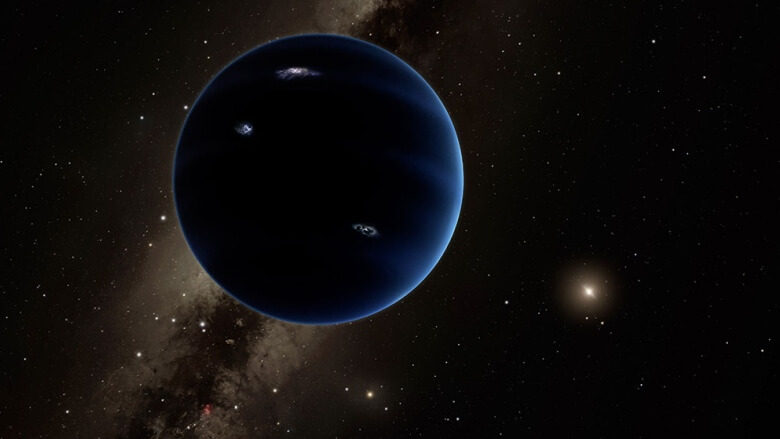 This artist’s rendering shows the distant view from Planet Nine back towards the sun. The planet is thought to be gaseous, similar to Uranus and Neptune. Hypothetical lightning lights up the night side. (R. Hurt/IPAC/Caltech/)

‘For the first time in more than 150 years, there’s good evidence that the planetary census of the solar system is incomplete.’
– Konstantin Batygin. California Institute of Technology

This Planet 9, as the two California Institute of Technology researchers call it, hasn’t been spotted yet. They base their findings on mathematical and computer modelling, and anticipate its discovery via telescope within five years or less.

The two reported on their research Wednesday in the Astronomical Journal because they want people to help them look for it.

“We could have stayed quiet and quietly spent the next five years searching the skies ourselves and hoping to find it. But I would rather somebody find it sooner, than me find it later,” astronomer Mike Brown told The Associated Press.

Brown and planetary scientist Konstantin Batygin feel certain about their prediction, which at first seemed unbelievable to even them. 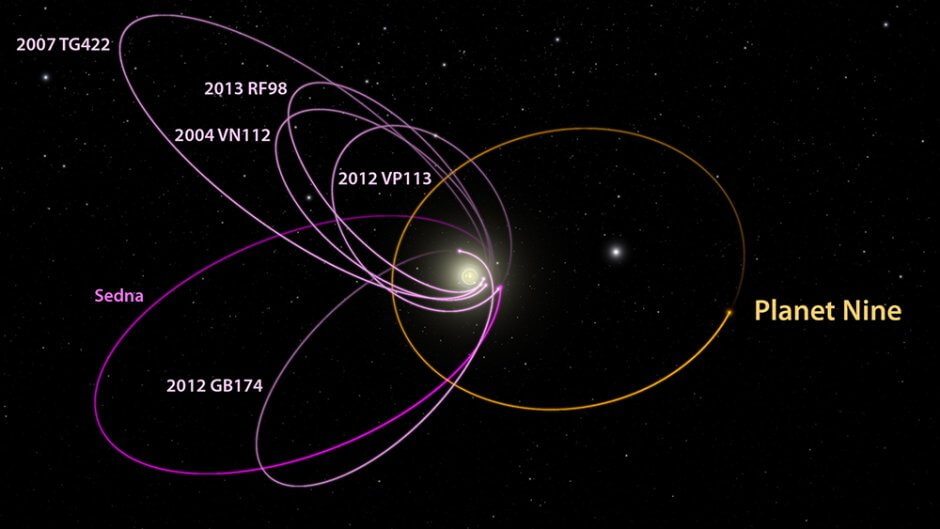 The six most distant known objects in the solar system with orbits exclusively beyond Neptune (magenta) all mysteriously line up in a single direction. Also, they all tilt nearly identically away from the plane of the solar system. A planet with 10 times the mass of the Earth in a particular orbit (orange) is required to maintain this configuration, scientist say. (R. Hurt/IPAC/Caltech)

“For the first time in more than 150 years, there’s good evidence that the planetary census of the solar system is incomplete,” Batygin said, referring to Neptune’s discovery as Planet 8.

Once it’s detected, Brown insists there will be no Pluto-style planetary debate. Brown ought to know; he’s the so-called Pluto killer who helped lead the charge against Pluto’s planetary status in 2006. (Once Planet 9, Pluto is now officially considered a dwarf planet.)

“THIS is what we mean when we say the word ‘planet,’ ” Brown said.

Brown and Batygin believe it’s big — 10 times more massive than Earth — and unlike Pluto, dominates its cosmic neighbourhood. Pluto is a gravitational slave to Neptune, they pointed out.

Another scientist, Alan Stern, said he’s withholding judgment on the planet prediction. He is the principal scientist for NASA’s New Horizons spacecraft, which buzzed Pluto last summer in the first-ever visit from Planet Earth. He still sees Pluto as a real planet — not a second-class dwarf.

“This kind of thing comes around every few years. To date, none of those predicts have been borne out by discoveries,” Stern said in an email Wednesday. “I’d be very happy if the Brown-Batygin were the exception to the rule, but we’ll have to wait and see. Prediction is not discovery.”

Brown and Batygin shaped their calculation on the fact that six objects in the icy Kuiper Belt, or Twilight Zone on the far reaches of the solar system, appear to have orbits influenced by only one thing: a real planet. The vast, mysterious Kuiper Belt is home to Pluto as well. 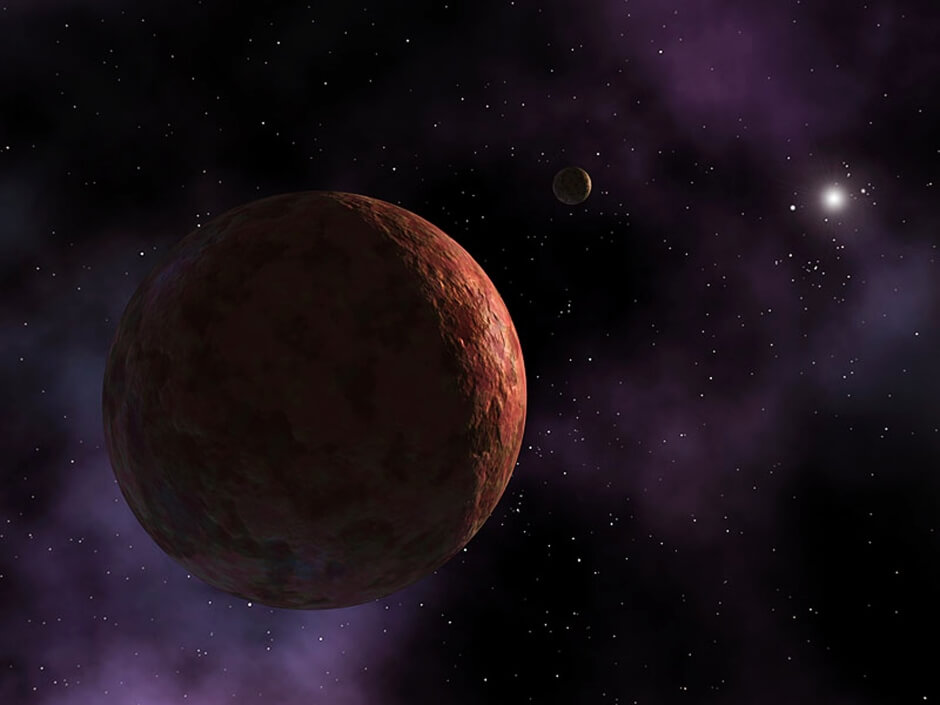 Sedna, seen in an artist’s conception, is a minor planet in distant reaches of the solar sytem discovered by Mike Brown more than a decade ago. (Reuters)

Brown actually discovered one of these six objects more than a decade ago, Sedna, a large minor planet.

“What we have found is a gravitational signature of Planet 9 lurking in the outskirts of the solar system,’ Batygin said. The actual discovery, he noted, will be “era-defining.”

Added Brown: “We have felt a great disturbance in the force.”

Scott Sheppard of the Carnegie Institution for Science in Washington said Brown and Batygin’s effort takes his own findings to “the next level.” Two years ago, he and a colleague suggested a possible giant planet.

“I find this new work very exciting,” Sheppard said in an email. “It makes the distant super-Earth planet in our solar system much more real. I would say the odds just went from 50 per cent to 75 per cent that this distant massive planet is real.”

Depending on where this Planet 9 is in its egg-shaped orbit, a space telescope may be needed to confirm its presence, the researchers said. Or good backyard telescopes may spot it, they noted, if the planet is relatively closer to us in its swing around the sun. It’s an estimated 20 billion to 100 billion miles away.

The Caltech researchers prefer calling it Planet 9, versus the historical term Planet X. The latter smacks of “aliens and the imminent destruction of the Earth,” according to Brown.

Who knows, there could even be a Planet 10 out there well beyond No. 9, but there aren’t enough data at this point to guess, Brown said.

The last real planet to be discovered in our solar system was Neptune in 1846. Pluto’s discovery came in 1930; humanity got to see the small icy world and its main moon Charon up close for the first time last July thanks to New Horizons.

The spacecraft, unfortunately, is in the opposite direction of Planet 9, according to the researchers, and thus unable to help in its detection.

Brown realizes skepticism will exist until the planet is actually observed. History is packed with mistaken planet-seekers, he said, and so “standing up and saying we’re right this time makes us almost look crazy — except I’m going to stand up and say we’re actually right this time.”

“OK, OK, I am now willing to admit: I DO believe that the solar system has nine planets.”

The mainstream media fails to report how all of the planets in our solar system are going through dramatic climate changes.

The following list contains all of the dramatic climate changes throughout our solar system. Additional notations are provided by David Wilcock as reported on GaiamTV:

Sun: The Sun is the center of our Solar System, and all life that is on this Earth came from the Sun. If there were no Sun, we would not be alive. This is simply scientific fact. And so any changes that occur in or on the Sun will eventually affect every person alive. The solar activity is the highest recorded in the past 8,000 years.

We know that the Sun’s magnetic field has changed in the last 100 years. There’s a study by Dr. Mike Lockwood from Rutherford Appleton National Laboratories, in California. Dr. Lockwood has been investigating the Sun, and reports that since 1901 the overall magnetic field of the Sun has become stronger by 230 percent.

Moon: Earth’s moon is growing an atmosphere . Around the moon, there is this 6,000- kilometer- deep layer of Natrium that wasn’t there before.

Jupiter: Over 200% increase in brightness of surrounding plasma clouds.(Huge belts in the giant planet’s atmosphere have changed color, radiation hotspots have faded and flared up again, and cloud levels have thickened and dissolved, all while space rocks have been hurtling into it the gas giant.) Plasma torus not seen before 1974.  Raging red thunderstorms beginning in 2008. The moon closest to Jupiter, Io, experienced 1000% increase in its ionosphere between 1973-96. Io’s surface became over 200% hotter between 1979-98. The moon, Europa, Is literally glowing since 2003.  The moon Ganymede is 200% brighter as noticed between 1979-95 while its atmosphere became 1000% denser.

Saturn: Major decrease in equatorial jet stream velocities in only 30 years, accompanied by surprising surge of X-rays from equator.  Saturn grew a plasma torus which became enlarged by 1000% between 1981-93. A new and larger plasma torus has just been discovered as well.  An aurorae appeared in Saturn’s polar regions in 1995.  In 2004, massive x-ray emissions were also detected near the equator at the 19.5 degree point. In 2011, a massive solar storm encompassed much of Saturn’s northern hemisphere, causing an “unbelievable” temperature spike.  Additionally, Saturn has 100x more ethylene gas than previously thought possible.

Pluto: 300% increase in atmospheric pressure, even as Pluto recedes farther from the Sun.

Earth: Substantial and obvious world-wide weather and geophysical changes. Earth’s Axis has changed. On Earth, the overall volcanic activity increased 500 percent from 1875 to 1975, while the earthquake activity has increased by 400 percent since 1973. Dr. Dmitriev says that comparing the years 1963 to 1993, the overall number of natural disasters — hurricanes, typhoons, mud slides, tidal waves, etc. — has increased by 410 percent.

Additionally, MANY people have noticed a significant change in the color of the sun, which has gone from an egg yolk yellow to a bright white light.

It is very well possible that these climate changes are the direct result of some large object or planet entering our solar system. With a 20,000 year orbit, there are no known documentations of this planet.

What we do know is something is affecting the weather in our solar system.  Could this be Planet X or Nibiru?

Perhaps, but Nibiru is said to have a 3,600 year elliptical orbit.

With all of the distractions on planet earth, most people’s attention is focused elsewhere, such as on the big game this weekend, the Kardashians, the flat earth debate, etc…

I’ll be following this on In5D and will keep you updated on any important information regarding this new discovery and how it affects us.