Pentagram, The Faultily Demonized and Defamed Symbol of Witchcraft, Harmony and Therapy

Healing, powerful, mystical for witches and mages, but also occult, ominous and evil for some others. In any case, there is no doubt that pentagram is omnipresent. Indeed, in every witchcraft tradition, also in Wiccan nowadays, pentagram is dominant. It is also indispensable in the sense that its magical properties cannot be neglected and numerous witchy practices cannot be performed without it. Pentagram is essential for rituals and spells, since it is not merely a symbol, but magic itself. Its significance is illustrated in many usages, such as the beautiful Triple-Goddess-Pentagram that represents the female Deity in conjunction with the phases of the moon and the archetypical stages of female life (the Maiden, the Mother & the Crone):

The five-pointed star symbol is also known as “pentalpha”, namely five A (from Alpha, the first letter of the Greek alphabet). The term “pentacle” on the other hand, refers to a pentagram inscribed into a circle. We often find this version in talismans, or ritual stages and decorations. “Pent-“ also comes from Greek and means five. This is a number that esoteric traditions have interpreted in various ways. This is why the symbol is loaded with a plethora of meanings and implications, as we will see below.

The simplicity of pentagram comes along with its geometrical symmetry: Its edges form five pyramids while they also include a pentagon in the middle. What is more, as the first picture below indicates, its lines are in golden ratio to one another.

A symbol rooted in ancient times

As The Element Encyclopedia of Secret Signs and Symbols, the Continuum Encyclopedia of Symbols  and other sources inform us, Pentagram’s first attestations appear on pottery fragments. These are dated back to circa 3500 BCE and were found in ancient Mesopotamia, on Sumerian and Babylonian artefacts. In this first usage, Pentagram stood for the five visible planets of the night sky: Jupiter, Mercury, Mars, Saturn, and Venus. Venus was later more closely affiliated with it.

Jews adopted pentagram during the Babylonian exile (6th c. BCE). Since then, the magical symbol occurs frequently in the ancient Jewish tradition.

Among Hebrew people Pentagram conveyed a multitude of symbolic interpretations: It represents the five books of Torah that Moses wrote down. Notice that the collection of these five books also bears the name “Pentateuch”(remember that ‘pente’ means ‘five’ in Greek). Moreover, Pentalpha was also known as “the seal of Solomon” (as opposed to the Hexagram or David’s star, the national symbol of Israel). Pentacles were also engraved on various objects such as rings or jars. Through the ancient tradition, Pentagram survived in Kabbalah and other practices associated with Judaism. It is actually in Medieval Times that Pentagram stood as a means that Solomon utilized in order to gather demons. This sort of pseudoepigraphical grimoires, like the so-called Key of Solomon, were probably responsible for the later demonization of the sacred symbol. Unfortunately, Pentacles abound in publications referring to “satanological” publications in which King Solomon is presented as the author thereof.

The Pythagoreans and the sacred number 5

It was actually in Ancient Greece that Pentagram acquired a more philosophical interpretation. The five edges of the symbol represented the five elements, namely water, earth, fire, air and spirit (aether). The followers of the philosopher Pythagoras made use of the Pentagram as a representation of the five elements, of the division of the human body and a representation of Hygieia, the goddess of Health, Sanitation and Hygiene. Besides that, it was the Pythagorean tradition that established the symbol as representative of sacred geometry.

The holiness of the number 5 in  Greek philosophy is found also in the thought of another ancient thinker. In his cosmogony, the philosopher Pherecydes of Syros made reference to the “Pentemychos” (five “recesses” < muchos, “nook, cranny, recess”, also “sanctuary” as in “small domestic altar in a corner”). According to Pherecydes, Cronos placed his seeds (semen) in five recesses from which the rest of creation arose.

The symbolic power of 5 was then preserved in the Christian era. Hence, pentagram indicated the five wounds of Jesus as well as the five senses. Since Pentalpha can be drawn in one stroke, it also represented a completed period, the beginning and the end, the Alpha and the Omega. Additionally, Pentagram occurs in Gnosticism as a symbol of the female principle. It was called the “Blazing Star” standing for the mysteries of the night sky. Later Alchemy and other schools of Hermetic philosophy made use of the symbol and from these sources Freemasonsry adopted the pentagram in more recent eras. On the other hand, in Celtic tradition Pentagram represented Morrígan, goddess of war and fate.

Subsequently, and due to the various previous traditions, in 1533 the writer Cornelius Agrippa composed his monumental De Occulta Philosophia libri III (Three Books of Occult Philosophy). This work has been a cornerstone for the documentation of western occultism and although Agrippa is sometimes presented as rejecting magic, we should take into account that the fear of persecution from the Catholic Church was enormous at that time. In any case, in his writings Agrippa associated pentagram with the symmetric proportions of the human body. This concept later led to Galileo’s renowned Vitruvian man which was based on the idea of harmonic proportion of the human body.

Pentagram in India and China

Taoism has also honoured the Pentagram, as the Symbol which embodies the 5 Cosmic Elements. Therefore, we ‘consult’  the Pentagram in Chinese medicine and acupuncture, in Feng Shui, Chinese Astrology and Chinese Spiritualism. More like the Greek (Pythagorean) elements, the Pentagram in Tao and Chinese occult sciences represents the balance of Fire (火 huǒ), Earth (土 tǔ), Metal (金 jīn), Water (水 shuǐ), and Wood (木 mù), as each edge correlates to one of the above elements. 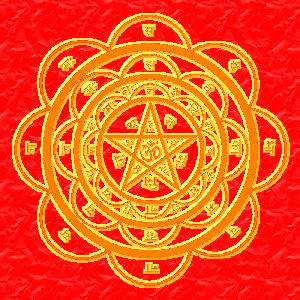 The demonization of Pentagram

While Pentalpha has been a sacred and apotropaic symbol for centuries, in modern era it has acquired a sinister interpretation. The result is that many groups that identify themselves as “Satanists” employ a symbol that only later was connected with black magic and similar non-positive notions.

The very roots of these connotations seem to be the accusations against the Knights Templar who presumably drew pentagrams featuring a goat head referring to Pan or other horned gods. Obviously, these accusations were against magicians who might still be venerating the ancient deities. Because of rumours that the Templars worship Baphomet (also known as Sabbatic Goat). Later depictions frequently present a goat-like evil spirit in a pentacle with its edge pointing down. This version is called the Sigil of Baphomet. Presumably, the three downward points symbolizing rejection of the holy Trinity.

Yet, the one who explicitly suggested that an inversed pentagram arouses evil readings was Éliphas Lévi, an influential French occult author and ceremonial magician. As he wrote in his book Dogme et rituel de la haute magie (1854) that “we must remark, however, that the use of the Pentagram is most dangerous for operators who are not in possession of its complete and perfect understanding. The direction of the points of the star is in no sense arbitrary, and may change the entire character of an operation, as we shall explain in the “Ritual”. (Eliphas Levi, Transcendental Magic, trans. A.E. Waite, page 69).

In his 1859 book Key of Mysteries he also added “when turned upside down, is the hieroglyphic sign of the goat of Black Magic, whose head may then be drawn in the star, the two horns at the top, the ears to the right and left, the beard at the bottom.  It is the sign of antagonism and fatality.  It is the goat of lust attacking the heavens with its horns. It is a sign execrated by initiates of a superior rank, even at the Sabbath.”

Lévi was also the one who drew Baphomet in a depiction that is often found nowadays. Later, the self-proclaimed Anton LaVey, founder of the Church of Satan and the religion of LaVeyan Satanism would extensively use his own-fashioned pentagrams

The fact that Pentagram is an ancient symbol of archetypical magic strength may be the reason why it has been so readily associated with malevolent usages. Pentacles should be defamed so that magic is less tolerable as well. What is more, popular culture has also significantly contributed in trivialization of what should be treated with caution and respect.

Despite this campaign against the most sacred magic symbol, Wiccans nowadays happily wear the pentagram and draw it for their rituals. Pentagram will remain a powerful sign of Magic, Therapy, Wisdom and Cosmic Harmony!

Share
Facebook
Telegram
Twitter
ReddIt
Linkedin
Tumblr
VK
Email
Print
Previous articleThe “War On Terror” Has Cost The US Nearly $6 Trillion And Killed Half A Million People – New Research Reveals
Next articleWhat is the atmosphere TRYING to tell us? Bizarre global observations on the rise – MrMBB333