By Stefan Stanford – All News Pipeline – Live Free Or Die

ust when we thought we’ve seen it all, the Denver International Airport comes along and throws another one in our faces.

We’ve long believed that the ‘illuminati‘ love to speak to us right out in the open via the arts and entertainment and as we see in the video we’ve embedded directly below, they’re doing it again with the DIA’s unveiling of a ‘talking gargoyle‘ who admits ‘he‘ is 243 years old. With Adam Weishaupt actually founding the illuminati back on May 1st of 1776 as was reported in this 2016 National Geographic story, one youtube commenter correctly points out that was 243 years ago.

As this ‘talking gargoyle‘ points out to one astonished passerby in the airport as seen in this video, “What, you’ve never seen a talking gargoyle before? Welcome to Illuminati headquarters, uh, I mean, Denver International Airport“.

So we’ll take a look at and listen to this video here while below, we’ll take a much more in depth look at the Denver International Airport conspiracy theory, specifically focusing in upon the other artwork scattered around and outside of the airport, much of it downright apocalyptic. From the Denver International Airport’s youtube description of this video.

He’s 243 years old, and is here to clear the air on all the conspiracies at DEN. Turns out this gargoyle is wiser than we thought, and is sharing more than we planned. Along with giving travelers his two cents, he’s surprising them with smiles and plenty of laughs. We believe interactions at DEN should not only be helpful, but fun too. That’s the art of airporting.


While the mainstream media avoids discussing the ‘illuminati‘, as this 2016 National Geographic story pointed out, the 18th-century German Weishaupt’s ideas have fueled global conspiracy theories for over 200 years, inspiring best-selling novels and huge Hollywood films although “this outwardly respectable professor was a dangerous enemy of the state, whose secret society, the Illuminati, was seen to threaten the very fabric of society.”

If you’re still one of those who gets most of their information from the mainstream media, the excerpt below from the Nat Geo story points out their very real rituals and ceremonies which date back 200+ years.

Secret papers seized by the Bavarian authorities revealed fascinating details about the rituals of the Illuminati. A novice preparing to pass to the higher level of minerval, for example, had to present a detailed report on the titles of the books he owned, the identity of his enemies, and the weak points of his character. Upon initiation as a minerval, he promised to sacrifice all personal interests to those of the society. 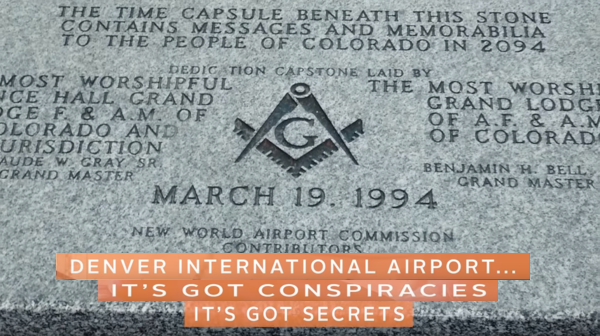 As we had mentioned on February 28th in this ANP story, it has long been believed that the alleged bunker system underneath of the Denver International Airport will be the home of the ‘new world order‘ government following a catastrophic World War 3 that ends most all of life upon the planet Earth and as we’ll see in the next several photographs within this story showing some of the artwork and murals at DIA, something incredibly creepy is going on there.

And if one notes the wording from the actual capstone seen above which is the official DIA time capsule to be opened in 2094, the ‘New World Airport Commission‘ mentioned does not exist while centered upon the granite stone are Masonic symbols.

Why such apocalyptic artwork spread all throughout the airport? As the website Vigilant Citizen had pointed out all the way back in this 2008 story, DIA is absolutely one of the most ‘sinister places‘ and evil, occult filled locations in America.

Strange words and symbols embedded in the floor? Check.

OK, this place is evil.

But seriously, there are so many irregularities surrounding the DIA, that a voluminous book could be written on the subject. The facilities and the art displayed lead many observers to believe that the DIA is much more than an airport: it is literally a New-Age cathedral, full of occult symbolism and references to secret societies.

The art at the DIA is NOT an aggregation of odd choices made by people with poor taste, like many people think. It is a cohesive collection of symbolic pieces that reflect the philosophy, the beliefs and the goals of the global elite. The DIA is the largest airport in America and it has cost over 4.8 billion dollars. Everything regarding this airport has been meticulously planned and everything is there for a reason. 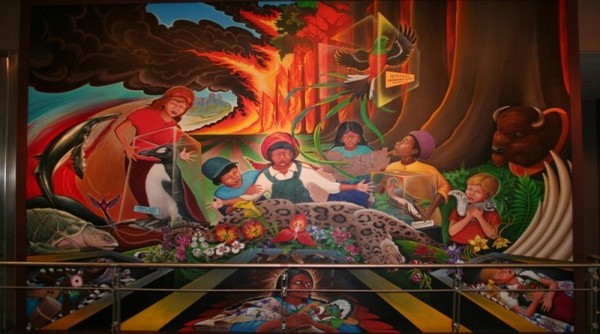 Why would an airport hold so many symbols of the apocalypse within it? In the next image above we see an image titled “Peace and Harmony with Nature” but as Vigilant Citizen points out, several children are laying in caskets while one child holds a Mayan tablet depicting the end of civilization as fire rages in the background. From their story.

So the airport’s official website says that the name of the mural is called “Peace and Harmony with Nature”. Really?

At the center of the piece, saddened children with extinct animal and plant species. In the background, a forest on fire and further back, a city on fire.

An interesting fact about that city is that it has been retouched and painted over many times during the years as if it represents something important for the creators. It seems surrounded by an ill colored haze as if it was attacked by a biochemical weapon.

One of the children holds a Mayan tablet depicting the end of civilization.

At the bottom, of this peaceful painting, we see three open-caskets containing dead girls from different cultures. Left is a Black woman, center is a Native woman. Why are they laying there with the other animals? Are we predicting the extinction of those races? We already know that the military has developed race-specific chemical weapons. Here’s what the Project for New American Century (PNAC), a think tank that defines the foreign and defense policy of the US has to say about this:

“… the art of warfare … will be vastly different than it is today … “combat” likely will take place in new dimensions … advanced forms of biological warfare that can “target” specific genotypes may transform biological warfare from the realm of terror to a politically useful tool.” 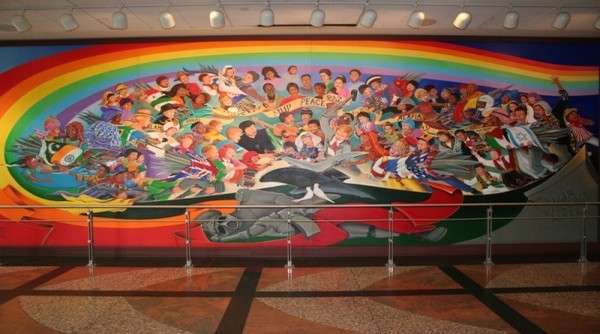 The next two murals at DIA that Vigilant Citizen explores are a two part mural called “Children of the World Dream of Peace” with part 1 above and part 2 below and as he points out in his story, these two murals both remind him of “Operation Paperclip” and the massive influx of Nazi German scientists into the US following WW2. From Vigilant Citizen.

Children of all colors, dressed in folkloric costumes give weapons wrapped in their country’s national flag to a… German boy? Huh? Yes, the Bavarian costume leaves no doubt. The boy at the center of the image, holding the hammer and apparently building something is German. Even the American kid (dressed as a boy scout) seems eager to give his weapons and flag to the German boy. You’re in the largest airport in America, in the middle of the USA, and this is the mural they display.

America joyfully submitting to Germany. It’s just too odd to compute. This obviously represents countries of the world giving up their military might and their national identity for “the common good”. Another reference to a New World order, with one government and one army. But why is the German boy at the center of everything? There are so many allusions to Germany and Nazism in this airport, there is NO WAY it can be a coincidence.

I can’t help but think of “Operation Paperclip“, which brought prominent Nazi scientists and researchers to the USA after WWII. Laying at the bottom of the mural is a broken figure holding a riffle (representing war) with two doves sitting on top of it (representing peace). Heartwarming. Now follow the movement the of the rainbow that starts underneath that statue, going around the children and leading you to part II of the mural (which has recently painted over)

Vigilant Citizen’s description of part 2 of the “Children of the World Dream of Peace” mural seen above correctly calls out the Nazi symbolism of the guard who has killed the ‘dove of peace‘ as children and the elderly cower. And as Vigilant Citizen points out, the fact that this mural was displayed at the main gate of the biggest airport in America is beyond disturbing.

The monster has awakened! This big and aggressive militaristic figure is dressed in a Nazi uniform (notice the symbol on the hat) with a face shaped like a gas mask. His hands are holding a rifle and a scimitar that is rather violently molesting the peace-bearing dove. On the left is depicted an endless lineup of crying parents holding their limp, dead baby. This is a truly atrocious painting, with no redeeming message or moral.

The fact that this was displayed at the main gate of the largest airport in America, during the age of political correctness (the nineties) is totally aberrant. The militaristic figure is glorified and all-powerful, situated at the center of the action. It has regained its powers that it seemed to have lost after WWII. It is back in full force and it’s leading the way to a new holocaust.

Look closely at the people on the left and the dead children sleeping on bricks. There is no traces of violence on them. They’re simply devoid of life as if they were poisoned by the deadly gas emanating from the rainbow above them. The monster, protected by his gas mask, is pointing the lineup of victims towards the letter on the bottom left. 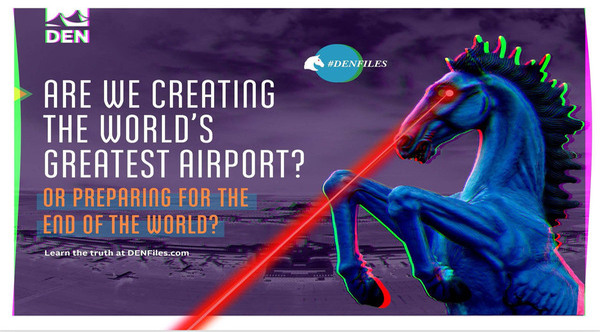 As we had reported on ANP back on September 5th of 2018 in this story titled “New Construction At Denver International Airport Proves They’re Throwing It In Our Faces Now“, DIA had recently undergone a construction project in which they took advantage of all of the conspiracy theories surrounding it, actually announcing, “Speaking of the Apocalypse, We’re Ready For It“.

Also seen in the actual billboard above asking “Are we creating the world’s greatest airport? Or preparing for the end of the world?“, the global elite aren’t even bothering hiding their ties to satanism and the occult any more with ‘in your face’ illuminati imagery fully on display despite the mainstream media still running cover for them.

So with a ‘talking gargoyle‘ announcing jokingly that DIA is the home of the illuminati while the masses laugh it off as nothing but humor, the fact that DIA is once again pushing their airport via jumping upon the ‘conspiracy theory‘ leads us to more questions than answers at a time when the whole world feels like it could explode in flames at any moment.