The Knights Templars were a secret society whose true purpose remains a mystery or is at least vigorously debated among scholars and historians to this day. The Templars left behind many clues of their actions which have been passed down through generations, hidden in ancient manuscripts and discovered by archeologists in the modern era. Their story is one that has captured the fascination and curiosity of people throughout the ages – were they sent to the holy land in Jerusalem to protect Christians on pilgrimages, or were they sent there on secret missions by higher authorities in order to unearth lost artifacts and buried treasure under temples and sacred holy sites?

The Knights Templars were members of a religious military order of Christian knighthood founded around 1118-1119 in Jerusalem by the French knight Hugh des Payens. For nearly two centuries this organization was the most powerful order in the medieval world. They were the first standing army in Europe since the fall of the Roman Empire and by the time they reached their pinnacle of power in 1300, it is said they numbered in the tens of thousands. 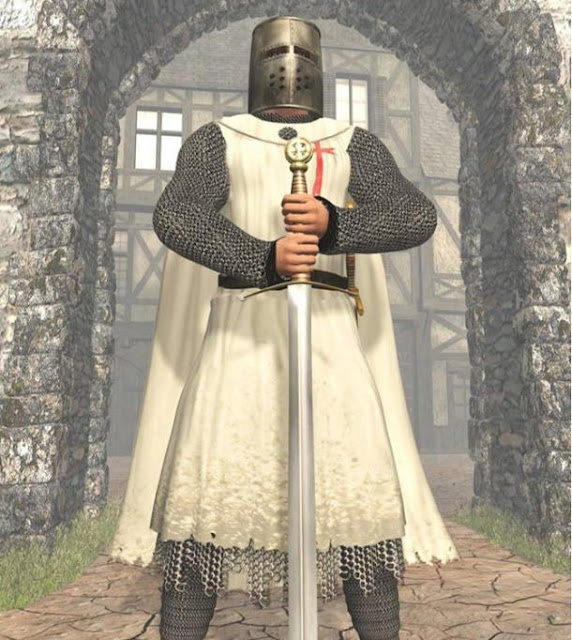 In the beginning, there were a total of nine founding knights who made up the organization and were all related to one another through blood or marriage. As both monks and soldiers, they were a paradox without precedent since there had never been praying priests who took up arms who also took vows of poverty, obedience and celibacy. Knights Templars did not surrender unless they were outnumbered three to one and believed that since they were fighting for God they would be immediately sent up to heaven upon falling in battle. 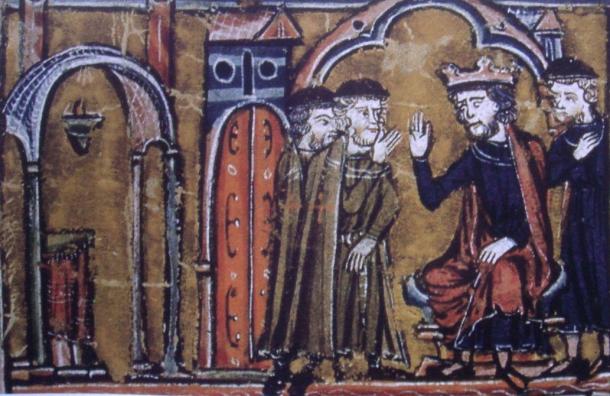 BaldwinII ceeding the location of the Temple of Solomon to Hugues de Payns and Gaudefroy de Saint-Homer. The fourth person is Warmund, Patriarch of Jerusalem. (Wikimedia Commons).

Today in Europe, there are hundreds of former templar sites scattered across the continent showing how influential they were centuries ago. At their peak, there were approximately 15,000 Templars houses with a network stretching from England to Egypt with the center of power situated in the then heart of the medieval world, France. Conventional history says the Knights Templar’s purpose was to protect travelers traveling along the coast of the Mediterranean to Jerusalem. In the middle ages, pilgrimages were made by westerners who had been guaranteed their safety in the city and templars protected them through the passes and mountains. In addition to protection of the pilgrims, Templars also defended the Christian kingdom of Jerusalem and other holy sites as part of their duty.

For two hundred years, the Crusades were fought in the name of God and were considered to be a clash of civilizations. Enemies were formed between the Christian west and Muslim east, which have endured to this day. In 1065, Jerusalem was taken by the Turks and the Christians were treated badly enough to where, throughout Christendom, people were stirred to fight and recapture the city. Another reason for the Crusades stems from the Church‘s desire to block any Islamic incursion into Christian lands. On November 27th 1095, Pope Urban II gave a speech in which he exhorted Christians to rise up against Muslims in the Holy Land. At this point in time, Muslims controlled Spain and parts of Eastern Europe. Thousands responded to the call and took up the sword but only around 1,000 ever made it to Jerusalem. The western Christians united with the Byzantines in the east and in 1099, the Crusaders, led by Godfrey of Bouillon, captured Jerusalem back from the Turks after a five week siege. When the holy sites were in Christian hands, Westerners began traveling to the area in record numbers. Outside the city walls, life was dangerous and there became a need for an escort service which is when the first Knights Templars came forward. 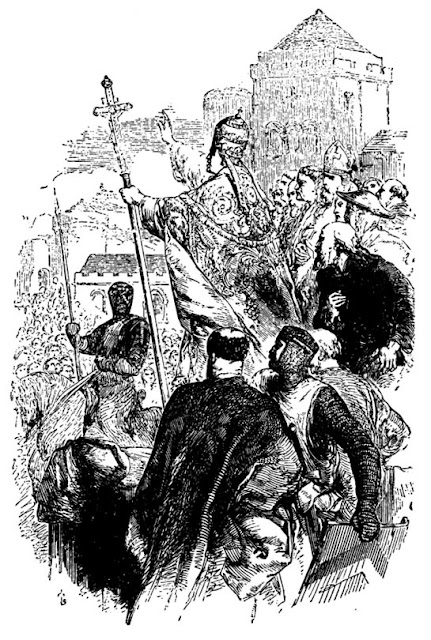 During the third crusade, the Christians were decimated at the battle of Hattin. It was the single worst military disaster in the holy land and one of the worst defeats for Christianity. The Templars were all put to the sword by their Muslim conquerors who would go on to take the city of Jerusalem a few months later. Subsequent crusades by later generations would come to be known as failures. When they returned home after the first crusades in 1128, the Templars were rich and influential and answered to no one but the pope. They also did not have to pay taxes and were allowed to cross through the borders of European countries unrestricted. From 1150 on, they stopped guarding the road to Jerusalem. Instead they devised a system which allowed pilgrims to travel without cash and valuables that might otherwise make them targets. The Templars entered into the banking business and the Temples (local lodges) were established throughout Europe, drawing deposits of massive wealth. The services the templars offered became the model for today’s banking system, money transfers, pension plans and traveler’s checks. Their wealth made them the prominent bankers of their age and the first western multi-national corporation. The most controversial service the Templars offered was the issuance of high profile loans. Princes and commoners alike banked with the Templars, and many states became indebted to them. The church, adamantly against usury at this time, looked the other way.

Decline of the Templars

With the fall of the Holy Land to the Muslims in 1187, the Templar order lost its founding purpose and became a target for unhappy debtors. With the failure of the crusades and subsequent closures of the passage to the holy land, there no longer became a reason for the Knights Templars to exist. Imagine a standing army roaming Europe that answered to no one and with no battle to fight. This attracted attention and due to the wealth and political power the Templars had, they were seen as a threat to the power structure. During the early 14th century, the order experienced a sudden decline. In 1302, King Philip IV of France came into conflict with the pope. Needing cash for his wars, he waged a vicious and skillful campaign aimed at suppressing the Templars, gaining their wealth while simultaneously, striking a blow against the papacy.

On Friday October 13, 1307, all the Knights Templars in France were arrested by agents of King Philip and he ordered any still residing in the country to be thrown into prison where they were tortured until confessing to accusations of heresy, homosexuality, and dishonest business activities. They were charged with capital offenses and their properties seized. More than likely, many of the confessions were meaningless but following these admissions, a Papal command was issued by Pope Clement V to all Christian sovereigns in 1312 which ordered that all Knights Templars be disbanded. The order of the Templar Knights went underground and their movements have been shrouded in mystery ever since. Friday the 13th is linked with this historical event. 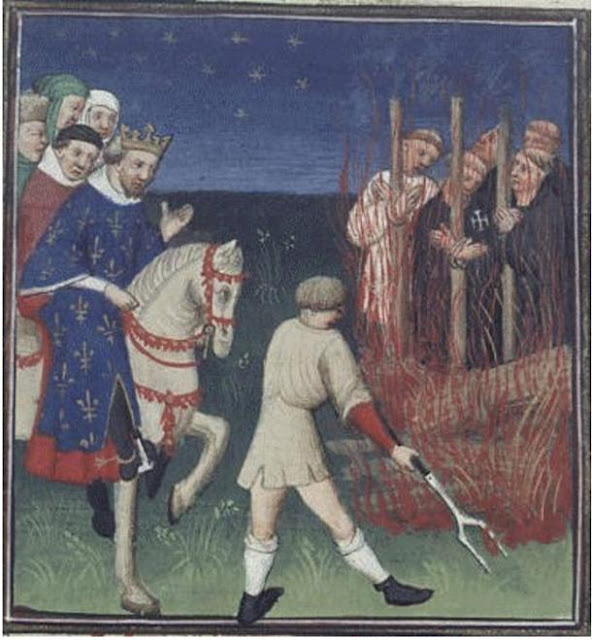 Execution of the Templars in the presence of Philip ‘the Fair’. Bedford Master 1415-1420, France. (Wikimedia Commons).

After Clement’s edict in 1312, the Templars virtually vanished from the pages of history. Of the hundreds, possibly thousands of Templars who were not arrested, there is little record of what happened to them. There is documentation that their large fleet of ships vanished and it’s possible that they fled to Scotland since the country was something a Templar stronghold at the time. They might have gone to Switzerland or hidden in the Alps which bordered southern France (its endless mountain range would have been a perfect hiding spot for treasure). Some survivors of the Templar order can be traced and they simply changed their name becoming the Knights of Christ in Portugal for example.

But of all the mysteries surrounding the Knights Templars, the most puzzling one concerns their time spent in Jerusalem. The Templars literally disappeared there for nine years and what they did in their time there remains mostly unknown. There were nine middle aged monks who were hardly in a position to protect travelers coming in and out of Jerusalem. There also doesn’t seem to be a written account of any pilgrims being guarded by the Templars. In 1867 a clue came to light when a British archaeological team excavated under the site of the temple mount in Jerusalem. There, they uncovered tunnels extending vertically from a mosque for some twenty five meters which fanned out horizontally under the dome of King Solomon’s temple. Templars spurs and various pieces of armaments were found as proof that the tunnels had been used by them. A prevailing theory is that the Knights Templars were digging under the Temple for treasure left there by the Jews after the invasions by the Romans in 70 AD. Other theories suggest the knights were guarding the Holy Grail and in possession of major treasures. The biblical temple of Solomon once housed the Ark of the Covenant and Ten Commandments. There are early masonic writings in the 1800’s citing documents which allegedly link the Templars with the arc of the covenant and treasure buried in the Temple of Solomon. Regardless of which theory is the right one, when they emerged again in Europe they were more wealthy, powerful and influential than ever.