From 438 miles (705 kilometers) up, the floor of the north Caspian Sea looks like someone’s just scoured it with a Brillo Pad. What could these bizarre marks be? Trawling scars? Propeller marks in sea algae or seagrass? An extraterrestrial message?

Don’t get out the tinfoil hat yet: NASA scientists say these mystery lines are the work of sea ice.

NASA Goddard Space Flight Center ocean scientists noticed the image this month, shortly after it was acquired by the Operational Land Imager on the Landsat 8 satellite, according to NASA’s Earth Observatory. The space agency put out the puzzler on Twitter, asking readers what the lines might be. 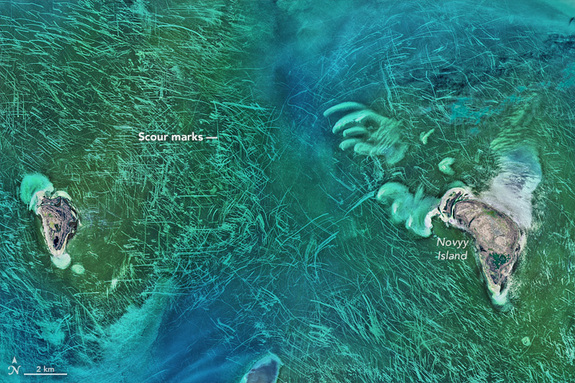 Strange scour marks are visible on the bottom of the north Caspian Sea in this image acquired by the Landsat 8 satellite on April 16, 2016.
Credit: NASA images by Norman Kuring, NASA’s Ocean Color web

Now, the answer seems clear. Stanislav Ogorodov, an earth scientist at Lomonosov Moscow State University in Russi, told the Earth Observatory that the phenomenon was almost certainly all natural: “Undoubtedly, most of these tracks are the result of ice gouging,” he said. [14 of the Strangest Sites on Google Earth] 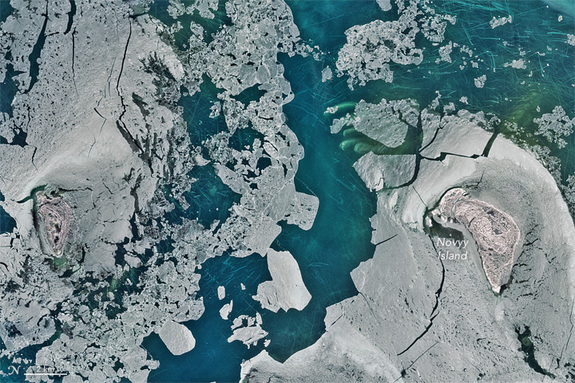 An image of the scoured area of the north Caspian Sea from Jan. 17, 2016, reveals ice at the ends of the marks, particularly visible in the upper right of this satellite photo.
Credit: NASA images by Norman Kuring, NASA’s Ocean Color web

The water in this area near Novyy Island is only about 10 feet (3 meters) deep, Ogorodov said, and the sea ice gets to be only about 1.6 feet (0.5 m) thick. But winds and currents sculpt this ice cover into jagged patterns called hummocks, which can reach the seabed. When wind or water pushes the floating ice around, Ogorodov explained to the Earth Observatory, the protruding parts can dig into the ocean floor and leave the scouring patterns seen from space.

Humans can cause similar-looking patterns. Propellers have scarred seagrass in the Everglades in Florida, and ships that fish by bottom trawling can bulldoze swaths of the seafloor with their nets. In the Caspian, though, the ice is almost certainly the predominant cause of these scours, according to the Earth Observatory. A look at a comparison image taken in January, when the ice was thick, shows chunks of ice at the ends of scour marks — the geoscience equivalent of a smoking gun.

The image also shows dark green coloration, which is likely seagrass or algae. The island in the image, Novyy Island, is the easternmost island of the Tyuleniy Archipelago, a group of islands in the northeastern part of the Caspian Sea that belong to Kazakhstan.

The Caspian is the largest inland sea in the world, and is bordered by Iran, Turkmenistan, Kazakhstan, Russia, Azerbaijan and Iran. The sea has no outflow to the ocean, and is, by an odd quirk of fate, below sea level. The northern end of the sea seen in the NASA image is in the Caspian Depression. The sea in this spot is about 92 feet (28 m) below sea level.