More than 50 new geoglyphs have been added to the mysterious Peruvian desert carvings. Some are made by the same culture as the Nazca lines and others show unique designs predating them. Archaeologists made their discovery with an exciting blend of amateur eyes combined with expert on-site knowledge and exploration.

According to National Geographic , the newly found designs were identified in the Palpa province or Peru and include both the linear and polygon figures made by the Nazca culture between 200 to 700 AD as well as human figures carved into the earth by the Paracas or Topará cultures between 500 BC and 200 AD. 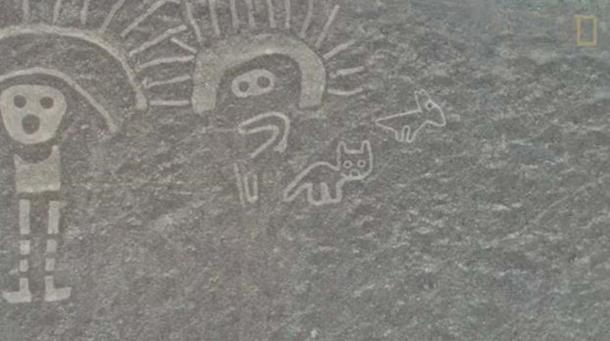 Archaeologist Luis Jaime Castillo Butters, the new geoglyphs co-discoverer, says the earlier Peruvian geoglyphs are not as visible as the Nazca lines, having been mostly laid down on the sides of hills and worn away over time. “Most of these figures are warriors. These ones could be spotted from a certain distance, so people had seen them, but over time, they were completely erased.” 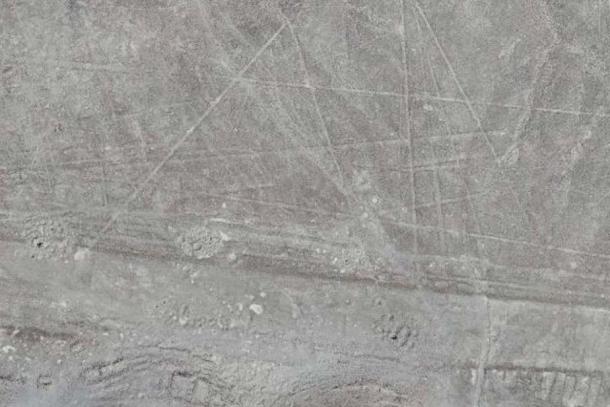 GlobalXplorer, a crowdsourced archaeology project put forward by space archaeologist Sarah Parcak and manned by over 70,000 volunteers, used satellite imagery to flag hundreds of potential sites of interest in Peru around the Nazca lines. Peruvian archaeologists then took that information to explore the most probable places with high-flying drones.

Parcak explained GlobalXplorer as a service to aid archaeologists in locating and protecting sites, telling National Geographic, “We give the data to local experts: This is their cultural patrimony, they’re the stakeholders. We’re providing a resource.”

And the chief restorer and protector of the Nazca lines , Peruvian Ministry of Culture archaeologist Johny Isla says the help is immeasurable ,

“The data and information obtained with the GlobalXplorer project are extraordinary in quality and quantity, and above all in a relatively short period of time. This puts us at the forefront in the registry of archaeological sites and geoglyphs in particular.” 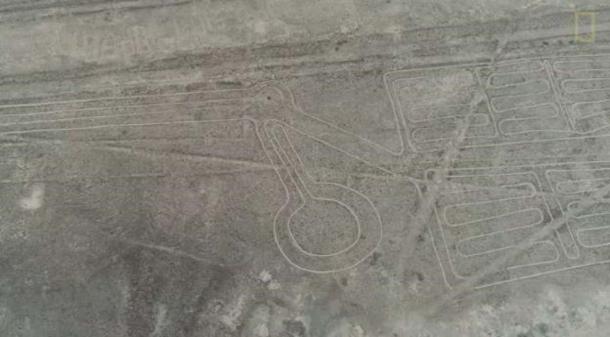 Head of the newly discovered geoglyph ‘the pelican’. ( National Geographic )

While satellite images can help to pinpoint some locations of interest, they can’t see all the details that lower-flying drones can. Castillo says drones flying at 200 feet (60.96 meters) or less provide more detailed views of smaller designs as “The [drone camera] resolution is incredibly high.”

The work is not done, there are still many more locations to explore and the fight to preserve the Nazca lines and the older geoglyphs continues. Castillo described the immensity of the battle for preservation by saying ,

“We’re not fighting a looter with his shovel, running away when you’re blowing a whistle; we’re fighting an army of lawyers. This is a constant battle, so the work we’re doing—documenting the sites, geo-referencing—is the best protection we can give the sites.” 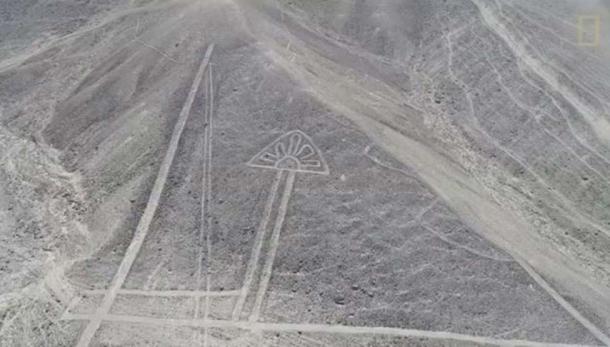 A ‘tupu’, a needle-like object used to hold pieces of clothing together. ( National Geographic )

The biggest threat is not necessarily looting, but unplanned urban and rural development pushing into the desert. There is always the concern of a desert protest getting out of hand or an unpredictable driver causing irreparable destruction as well.

The geoglyphs in the Peruvian desert are undoubtedly important to understanding the Pre-Hispanic cultures of Peru, awe-inspiring in appearance, and a fascinating mystery still waiting to be solved, but the battle for their preservation unfortunately never ends. 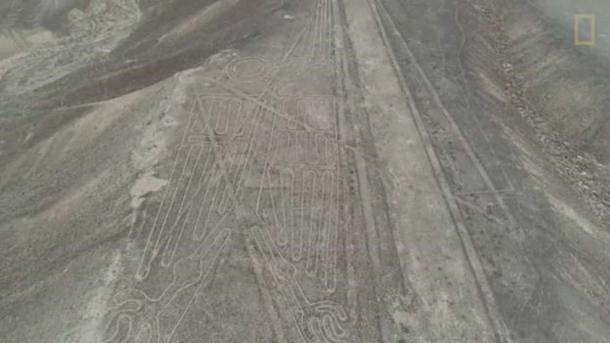 The complete geoglyph of the pelican. ( National Geographic )

Top Image: A depiction of a flying human tethered to a monkey. The geoglyphs pre-dating the Nazca lines show many more human designs. Source: National Geographic