There was a new release of documents by Bonanza Media, Max van der Werff and Yana Yerlashova on Monday morning. They add to the evidence released last week from the files of the Joint Investigation Team (JIT) prosecuting the downing of Malaysia Airlines MH17 on July 17, 2014.

Two secret reports by Major General Onno Eichelsheim, head of Dutch military intelligence (MIVD), have been disclosed in their Dutch originals. The first told Dutch prosecutors that the MIVD relied on intelligence obtained from “partner informatie” – partner intelligence — to conclude no Russian BUK missile radar and launch units had crossed the border into Ukraine before or on July 17, 2014; no BUK missile radar targeting or firing on MH17 had been detected; and no identified Russian units on the Russian side of the border had launched missiles.

In his reporting Eichelsheim told the prosecutors his intelligence came from “reliable sources and analyses of all locations”. The prosecutors understood Eichelsheim to be referring to US satellite and airborne electronic surveillance and NATO and British signals monitoring. Despite statements from Washington officials in the aftermath of the shootdown that they had seen US satellite data, and statements from Dutch officials claiming to have been briefed on these data, none has been documented until the Eichelsheim disclosures from the JIT files. Eichelsheim reveals that US intelligence means the opposite of what US officials have told their allies to insist upon.

A second letter report by Eichelsheim was revealed by Bonanza Media today. Dated September 21, 2016 – the same date as the first report – Eichelsheim identified the same “partner” intelligence – US, NATO and British – for the details of a BUK missile radar and launcher unit detected in the Donetsk area on the day of the shootdown.

Referring to photographs of this unit which had been published on the internet by Ukrainian and NATO propaganda sources, Eichelsheim explicitly denied the BUK was capable of being fired. “Based on the available information,” Eichelsheim discreetly identified his US and NATO sources. He concluded: “On the internet, there are additional photos (annexes 1 and 2) showing a 9A310M1 radar and launch vehicle of which the electronics section located in the rear of the unit has been completely destroyed.”

This military report flatly contradicts the core allegation in the JIT press statements and the Dutch prosecutors’ indictment charging four men – three Russians, one Ukrainian fighting on the Novorussian side — with culpable homicide in the downing of MH17. They are scheduled to go on trial, in their absence, next month. According to van der Werff and Yerlashova, Eichelseheim’s agency will neither confirm nor deny the authenticity of the two reports.

For the new documents and the analysis by van der Werff and Yerlashova, read this. The documents can be read at this link (expiring on February 29).

Analysis of the legal implications of the new disclosures for the trial which the Dutch plan to open in The Hague on March 9, read this.

Translation: “On this basis MIVD draws the conclusion that from these two Russian ground based air defence systems near Rostov-on-Don no missile launch took place on 17 July 2014.” 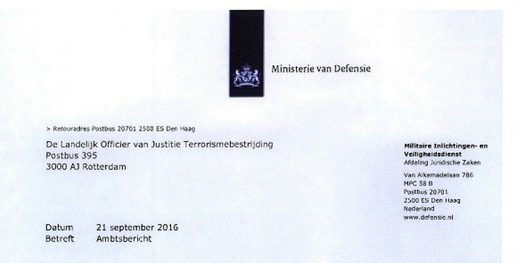 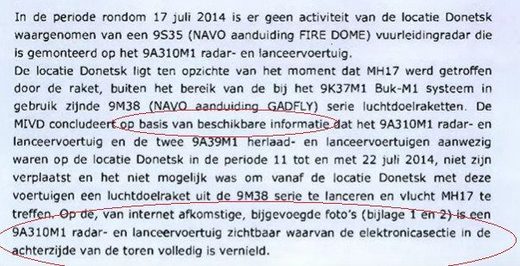 Based on the available [partner] information, the MIVD assesses that this [evidence of destruction] concerns the 9A310M1 radar and launch vehicle that was present at the Donetsk location in the period from the 11th through 22nd of July.”

For the full dossier from Bonanza Media, including the Dutch originals, click to view.