If you can believe it, the Indian Ocean area that has been intensely searched for the missing Malaysia Airlines Flight 370 has now been declared a total bust. Why? Because the infamous “pings” detected there — which we were repeatedly told came from the aircraft’s battery-powered emergency broadcast device — actually came from the ping detector used by the U.S. Navy.

You read that right: the pings were actually produced by the ping sensor, not the missing airplane, we’re now being told.

This is according to Michael Dean, the Navy’s deputy director of ocean engineering, as quoted on CNN (1) where he says:

Our best theory at this point is that (the pings were) likely some sound produced by the ship … or within the electronics of the Towed Pinger Locator. Always your fear any time you put electronic equipment in the water is that if any water gets in and grounds or shorts something out, that you could start producing sound.

Sounds like some amazing technology: a pinger locator that randomly emits pings! I wonder if the U.S. Navy has also produced sonar detectors that emit random metallic banging noises.

This discovery led the joint search agency to abandon the search site, declaring (2):

The Australian Transport Safety Bureau (ATSB) has advised that the search in the vicinity of the acoustic detections can now be considered complete and in its professional judgment, the area can now be discounted as the final resting place of MH370. 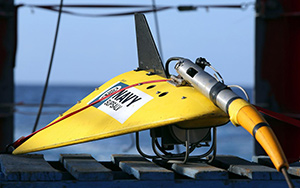 Secondly, random water getting into complex electronics does NOT produce specific ping frequencies that could be mistaken for those coming from the airplane. Generally speaking, if you slosh water on electronics, you short out the entire circuit board and the whole thing stops working. This explanation that maybe some water got into the unit and magically made it emit pings at the precise frequency of a downed airplane is pure comic book science fiction. It smacks of the same kind of logic that says if you get bit by a radioactive spider, you will become Spiderman.

This is clearly another dose of total B.S. on the MH370 mystery, an event which has been shrouded in loony “official” explanations from the very start.

Now the entire thing has taken on the atmosphere of part circus and part public theater. It’s almost as if the search is being conducted for no reason other than to pretend somebody is still looking for the airplane when the most likely explanation, by far, is that the plane was hijacked by militants and diverted to land at another airport.

Yet for some reason, this theory is also met with derision by the conventional press which depicts any talk of the plane being hijacked as a “conspiracy theory.” But they forget that the airplanes on 9/11 were of course hijacked by militants — that’s the official U.S. government explanation, come to think of it. So why is a plane being hijacked by militants a “conspiracy theory” in the Indian Ocean while the exact same scenario is “official government fact” in New York City? The media’s labeling of something as a “conspiracy theory” is entirely subjective and has no basis in actual fact.

Everybody also seems to have forgotten that all the nations in the region run military radar that tracks everything in the sky, and that an aircraft as large as that Boeing jetliner would have left a massive radar signature. Unless you think a giant Boeing aircraft has a secret stealth mode, some government in the region has radar data showing where this plane went… and somebody is covering it up for reasons we can only imagine.

What we know conclusively at this point is the this entire “ping” thing was total public theater and that we’ve all been distracted for weeks by a completely fabricated wild goose chase. It did give CNN something to broadcast, however, since the news network long ago decided not to cover any actual news that matters (the national debt, VA hospital scandal, massive unemployment, etc.).

I feel sorry for all the well-meaning men and women who are part of this search and who are having their time and effort wasted by these dishonest governments that won’t give anybody a straight answer. The good men and women of the U.S. Navy deserve to have their talents and skills put to better use.