And of course he quoted Tolstoy.

Russian President Vladimir Putin once again had to pull all stops at the International Valdai Discussion Club’s 12th annual meeting in Sochi to highlight the tremendous seriousness of the current geopolitical juncture.

As a compact Greatest Hits on comparative foreign policy and military strategy, this already qualifies as required reading in political science courses everywhere. Putin’s full speech, plus a crucial Q&A, is here. The speech on video is here.

Let’s go straight to some of the unmissable highlights.

On “moderate rebels” in Syria: “We shouldn’t play with words here and divide the terrorists into moderate and non-moderate … The difference, according to the “specialists” (Team Obama), seems to be that “moderate” bandits behead people softly … Success in fighting terrorists cannot be reached if using some of them as a battering ram to overthrow disliked regimes (because) it’s just an illusion that they can be dealt with (later), removed from power and somehow negotiated with.”

On the partition of Syria: “The territorial division of Syria is unacceptable. It is not going to resolve the conflict. The conflict will acquire a permanent character. Nothing good will come out of this … Just imagine that in case of taking Damascus or Baghdad, terrorist bands might have received, practically, the status of the official government. The bridgehead for global expansion could have been created. Does anyone think about that?”

On Russia’s air campaign in Syria: “I’d like to stress once again that is completely legitimate, and its only aim is to aid in establishing peace.” Putin makes a clear distinction between Washington’s target – “Assad must go” – and Moscow’s: to fight all brands of Salafi-jihadi terror before they come to Russia.

On the Iranian nuclear dossier: “The hypothetical nuclear threat from Iran is a myth. The US was just trying to destroy the strategic balance, not to just dominate, but be able to dictate its will to everyone — not only geopolitical opponents, but also allies.”

On nuclear weapons: “We had the right to expect that work on development of US missile defense system would stop. But nothing like it happened, and it continues. This is a very dangerous scenario, harmful for all, including the United States itself. The deterrent of nuclear weapons has started to lose its value, and some have even got the illusion that a real victory of one of the sides can be achieved in a global conflict, without irreversible consequences for the winner itself — if there is a winner at all.”

In a sound world, this would be greeted as sound realpolitik. And yet we live under the shadow of Empire of Chaos newspeak and neocon/neoliberalcon hysteria. A world where Iraq had weapons of mass destruction; Iran was making a nuclear bomb; “kill lists” are legitimate; al-Qaeda in Syria are “moderate rebels”; Russia, China and Iran are “threats” for the Pentagon worse than ISIS/ISIL/Daesh; and the Pentagon believes it can win a war against all those “threats” – Russia, China, Iran – with no consequences. A world where peace is war.

Now for the facts on the ground. It’s wishful thinking to expect Washington, Ankara, Riyadh and Doha will simply let Syria “go” after all those years of supporting, training and weaponizing a mostly Salafi-jihadi galaxy bent on regime change. At the same time Putin and the Kremlin know these actors cannot directly weaponize the “moderate rebels” anymore, because their agenda is now fully exposed in front of global public opinion.

On the ground across the Sykes-Picot-in-ruins “Syraq,” what’s going on now essentially pits the “4+1” — Russia-Iran-Syria-Iraq plus Hezbollah, including their joint intel center in Baghdad — against the NATOGCC compound, as in Turkey, Saudi Arabia and Qatar. An elaborate proxy war is a go — and all manner of red alerts come to mind.

Trouble, trouble everywhere. Let’s start with the GCC minions. The House of Saud is apoplectic with Iran’s imminent political, diplomatic and trade resurgence; not to mention that Tehran is winning on both the Iraq and Syria fronts.

In parallel, those barbarian fanatics that pass for imams in Saudi Arabia have called for a jihad against … Russia. Saudi “thinkers” (?) want Riyadh to lead a coalition against the “remnants” of the Syrian Arab Army, Hezbollah and Iranian advisers to speed up regime change in Damascus.

It’s useful to remember that the Saudis are already part of what I call the Coalition of Dodgy Opportunists (CDO), led from behind by Washington. Lost on these Saudi “thinkers” is the fact this new “coalition” would have to go head to head against the Russian Air Force. 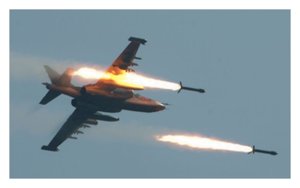 © Asia Times
Russian jets firing at IS targets in Syria.

But we haven’t been hurled to the unreachable levels of the Supremely Pathetic yet. That happens when Qatar starts to mull a “direct military intervention” in Syria. Qatar’s Foreign Minister Khalid al-Attiyah told CNN, “Anything that protects the Syrian people and Syria from partition, we will not spare any effort to carry it out with our Saudi and Turkish brothers, no matter what this is.”

At this level of demented geopolitics, all that’s left is quoting another demented player, jihad-enabler Bandar Bush (he threatened Putin face to face, no less), who — correctly — depicted Qatar as “300 people and a TV station”. Leave it to GCC “thinkers” to conceptualize Saudi and Qatari F-16s bombing Iranian forces next to Russia’s air base at Latakia, a couple of Sukhois turning them to ashes and then, what, the Pentagon declares WWIII?

And for the requisite post-Monty Python sketch, let’s have the — demented — King Salman of Saudi Arabia plus the mini-emir of Qatar deliberating at a whisky/cognac/lap-dancing party how to go to war against both Russia and Iran just so al-Qaeda in Syria may engineer regime change in Damascus.

It’s always enlightening to keep in mind Tunisian writer Hamadi Redissi; “The theses of millenarian, misanthrope, bellicose, anti-Christian, anti-Semite, misogynous Islam are all found in raw in Wahhabism.” Or Algerian writer Bualem Sansal; “Papa’s Arab world will be finished once this absurd thing will be smashed, this club of arrogant and cruel fake princes, which pose as guardians of the mythic Arab race and true Islam.”

Well, things are not much better in the realm of that Salafist Grand Turk in a blue suit, Sultan Erdogan.

Assuming there will be real Moscow-Washington coordination (and that’s a major “if”) to seal the Syrian-Turkish border – where a de facto no-fly zone is already in effect, controlled by Russia – this will cut not only ISIS/ISIL/Daesh but also al-CIAda “moderate rebels” from their supply lines.

Three consequences are immediate. 1) no Turkish-controlled “safe haven” in northern Syria implemented by Turkmen brigades (that’s already the case). 2) No possibility of Ankara annexing Aleppo. 3) the end of all elaborate plans for that nefarious gas pipeline from Qatar through Syria all the way to Turkey to supply European customers, one of the absolute key reasons fomenting the Syrian tragedy.

Vainglorious Sultan Erdogan will never be able to live with that. 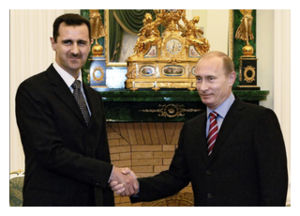 As Baghdad advances on its own fight against ISIS/ISIL/Daesh – to the thunderous silence of embarrassed-to-oblivion Western corporate media – Moscow keeps pressing for the voice of reason.

Bashar al-Assad’s spectacular Moscow appearance – which enraged neocons/neoliberalcons to Kingdom Come – came complete with an ultra-high level dinner with Putin, Medvedev, Lavrov and Shoygu. It does not get more graphic than that; the order of priorities is to fight the “Caliphate” goons to death, and in parallel conduct a political process. Forget about regime change.

Putin briefed both Sultan Erdogan and King Salman on the phone. Then Russia, US, Turkey and Saudi foreign ministers met in Vienna on Friday to discuss the political road map. Moscow has to convince Riyadh that Tehran also must be at the table; that’s starkly obvious, but try reasoning with those Saudi “thinkers.” Even John Kerry has been uncharacteristically reasonable, stressing all countries with an interest in Syria, including Russia and Iran, agree on the need for a unified, secular and pluralistic Syria governed with the consent of its people.

So, extrapolating from Putin’s speech, this is where war and peace stand at the moment. But as this is a mad, mad world where peace is war, it’s as if we are all left in suspension by what a bunch of deranged Wahhabis are up to next.