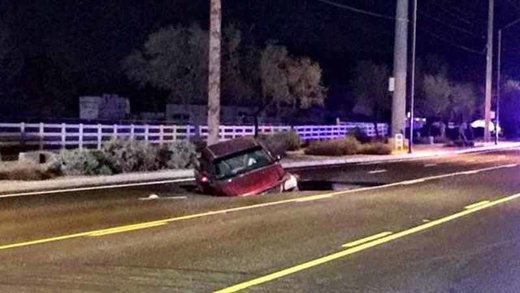 © KPHO/KTVK
Christian Wolf said he was traveling around 45 mph when his truck went into the sinkhole.

Traveling in the Town of Gilbert this morning? You might want to avoid Greenfield Road.

A sinkhole has closed Greenfield Road between Germann and Queen Creek Roads.

One vehicle was swallowed by the sinkhole, but no other injuries or property damage has been reported.

It is unclear why the road collapsed.

This is the second sinkhole to appear in the East Valley in two weeks. A sinkhole on February 5 killed a farmer in Queen Creek.