ISIS, Al Qaeda And The CIA: The Documented Connection

The Middle East is fertile ground for conspiracy theories, and one growing to towering heights these days says the US created the Islamic State. But while the US may well have aided ISIS in its formative days with covert supplies of weapons and CIA funding (directly or indirectly, via Turkey leading political families) the one nation most responsible for iteration after iteration of “terrorist organizations” is Saudi Arabia which “created” not only the Islamic State, but al-Qaeda, al-Nusra, and many other Sunni Jihadist groups in Thailand, the Philippines, Indonesia, India, Pakistan.

The US has long been aware of this, of course, and it has provided material support to some of them in the distant past, for example to the Taliban in the war against Russia. But the more reasonable among us have questioned recent claims that the US intentionally created the Islamic State, a group of the same lineage as the Saudi terrorists responsible for 9/11. [Zero Hedge a CIA fake website?]

Those rejecting a direct link between the US and the Islamic State instead, ask a perfectly logical question: why would the US allow a country ruled by monarchs with dark-age-sensibilities get away with attacking us on 9/11, funding al-Qadea in Iraq (a group that killed a few thousand US soldiers), and now the Islamic State? Two answers: fat, senile Saudi kings are preferable to the Islamic monsters that would replace them in a regime change, and the Bush family/Carlyle Group would prefer not to kill the goose that lays the golden egg.

Thanks to the resurrection of “J Pierpont Morgan”, these doubts and questions are no longer reasonable. They are, in fact, irrelevant. Because J Pierpont Morgan, apparently experiencing a Scrooge-like transformation, has seen the light. Yesterday he tweeted three public source documents that conclusively show a senior CIA spy – a major figure in operations from South America to the Middle East – is lobbying the US Government to destroy Iraq and formally create an independent Sunnistan on behalf of a Sunni terrorist. 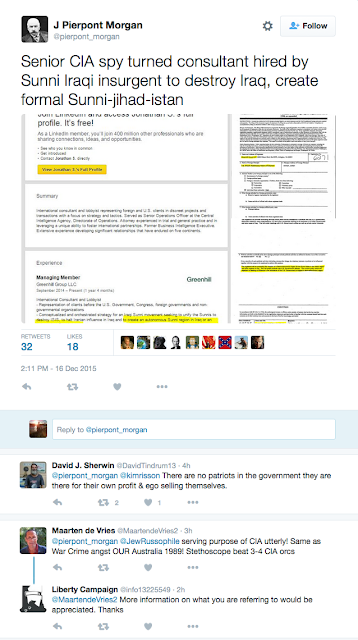 That terrorist joined the Iraq insurgency in 2004 under the Al-Qaeda Iraq banner, and was given hundreds of millions of dollars by the CIA and CENTCOM to defect, joining the US-led coalition in the now famous “Surge.” Known as H.E. Shaykh Abdalrazzaq Hatem al-Sulayman, this self-described prince is the head of a 4 million strong (mostly Sunni) tribe in Anbar, and lived the high life on US taxpayer money-that is until Obama declared AQ and AQI dead, bolted from Iraq and pivoted toward Asia. No CIA. No Surge. No money. Just the wasteland that is Anbar, and a Baghdad government intent on consolidating power at Sulayman’s expense.

His Eminence, with his children in need of Bugatti super cars, flats in London, multiple Vertu mobiles, and an entourage of slaves, did what any good dad would: he created an insurgency called The Anbar Tribes Revolutionary Council in 2013, and solicited funds from Sunni Monarchs and individuals throughout the GCC. The goal: destroy Baghdad and restore the Sunni to power in Iraq. His allies: the Ba’ath and ISIS.

In late 2014, Sulayman connected with Jonathan Greenhill, “former” Senior Operations Officer at the CIA who set up shop in DC as a lobbyist. Makes sense. CIA spy since the early 1980s, probably living oversees under non-official-cover, comes home to lobby congress. Anyway, Mr. Greenhill incorporated the Greenhill Group LLC, and Sulayman retained him. One wonders how Sulayman became aware of Greenhill’s lobbying venture. 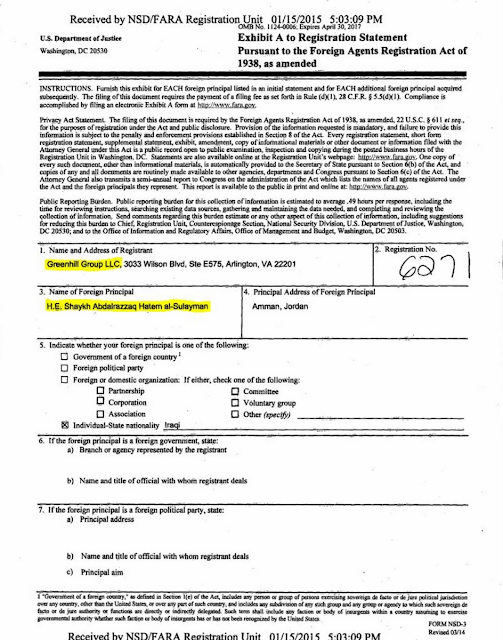 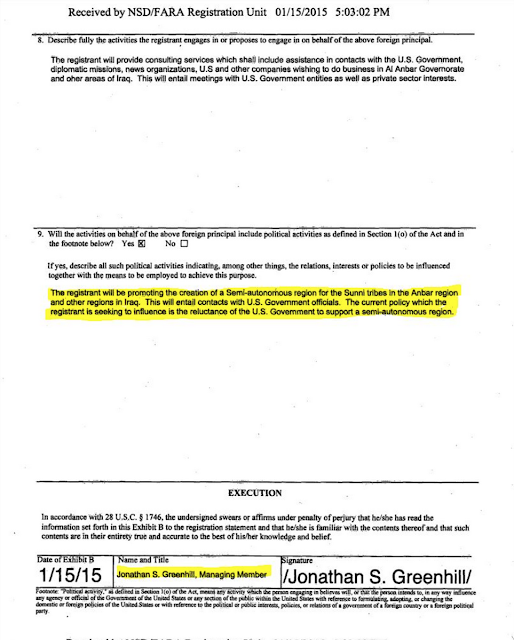 Mr. Greenhill’s LinkedIn page says he “conceptualized and executed one of the agency’s most successful counter terrorism covert action operations while leading a CIA base in an exceptionally dangerous, high stress war zone environment.” Might that be the Surge? Might Mr. Greenhill have played a role in funneling hundreds of millions of dollars to members of the AQ Iraq insurgency like Sulayman?

Oddly enough, Mr. Greenhill has a Facebook page too.

Who knows? What we do know is one of the most important spies in the CIA, one with a major role in the Near East (probably Iraq), definitely was retained as a lobbyist by Sulayman. And Sulayman retained him to “create an autonomous Sunni region in Iraq or an independent Sunni State.”

In other words, destroy Iraq by formally creating and recognizing Sunni-Jihadi-stan. Or a safe-zone for Sunni terrorists. Or what it actually is, a caliphate. It was recently written in the Washington Post that many Shia Iraqis harbor the conspiratorial belief the US created the Islamic State to destroy Iraq. Conspiracy theory becomes conspiracy fact.

A Sunni religious group has hired a Washington consulting firm to make the case for creating a new semi-independent region in Iraq.

Ali Hatem al-Suleiman, the leader of the largest Sunni tribe in the country, hired Calex Partners to set up meetings with organizations, corporations and congressional offices “in furtherance of the goal of forming a semi-autonomous region for the Sunni tribes in Iraq,” according to forms filed with the Justice Department.

“Currently, US policy does not envision the formation of a semi-autonomous region. It is this policy that the registrant seeks to change,” the forms say.

Jonathan Greenhill, a principal at Calex Partners, signed the contract to represent Suleiman. He is a former senior operations officer at the CIA with experience in the Middle East.

The tribes want a region to themselves — similar to one held by the Kurds, another minority ethnic group that has its own semi-autonomous government in northern Iraq.

Sunni tribes had been at odds with outgoing Iraqi Prime Minster Nuri al-Maliki’s Shiite-led government, leading some to pledge support to the Islamic State in Iraq and Syria (ISIS). Sunnis, by contrast, had dominated under former Iraqi President Saddam Hussein and were largely marginalized by the Maliki government that followed.

The connections between the Sunni tribes and ISIS have made some U.S. officials wary of aligning with them, according to Al-Monitor.

But the new Shiite administration under Haider al-Abadi has made an effort to mend fences with the Sunnis, according to Reuters, and religious and tribal leaders have said they would be willing to back the new leader “if certain conditions are met.”

Those conditions largely revolve around ending violence in Sunni-populated areas and providing reparations for people who were displaced, Reuters reported. Creating a semi-autonomous region for the tribes might also be included in potential talks with the new government.

Greenhill isn’t the first American lobbyist to be employed by tribal organizations.

Mark Alsalih began representing the Common Council of Iraqi and Arabic Tribes, which is run by Suleiman, over the summer.

Alsalih told Al-Monitor last month that he had been trying to draw interest from officials in Obama administration about collaborating more closely with Iraqi and Syrian tribes.

“The U.S. needs to work hand in hand with the Sunnis that have the on-the-ground intel and that are being targeted by ISIS,” he told the publication. “The tribes can identify with great accuracy where ISIS is, who’s supporting them, how they’re getting their money and even where they sleep at night.”
________

Suleirman has been quoted by the Huffington Post as saying “The United States has empowered a bunch of crooks here in Iraq, people who used to live abroad in five-star hotels, while we were here suffering under Saddam. It was the United States that toppled Saddam, but these politicians took advantage of the confusion, they came aboard American tanks and claimed that they were the ones who defeated Saddam.”

According to his Wikipedia page, Suleiman “claims that ISIS only constitutes 5-7% of the anti-government forces. He claims that the majority of fighters are from Iraq’s Sunni tribes.”

Another recent filing, for Goldin Solutions Inc. reveals that the company has been hired for a $30,000 monthly retainer to do traditional media relations outreach for RDIF Management – The Russian Direct Investment Fund, a company owned by the Russian government to encourage investments in Russia.
________ 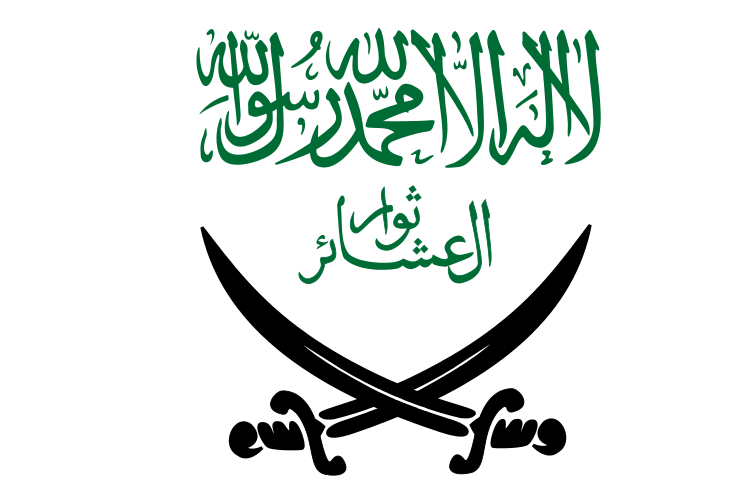