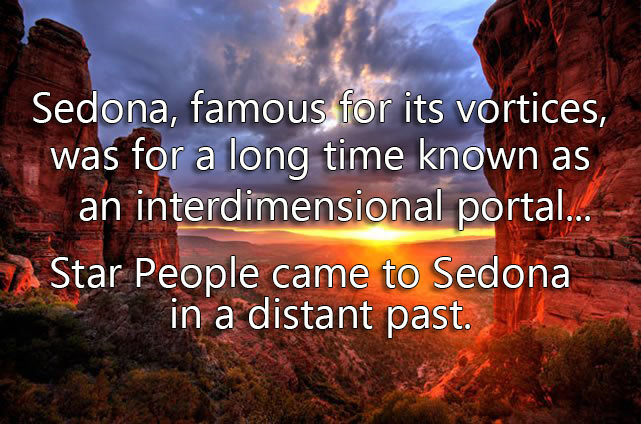 Sedona is a truly mysterious spot on this planet. This wonderful place is famous for its vortex and it has long been known as an inter-dimensional portal.

According to local folklore, there are tunnels leading from Sedona to another space-time dimension and Star People were present in Sedona, a place of the special energies and frequencies.

There are people who believe the vortexes can be used to travel to alternate dimensions.

Once known as Nawanda, Sedona was sacred to all tribes of Turtle Island (North America).

Native Americans have been coming to Sedona’s Red Rocks, which are considered spiritually charged.

It’s a place with very special areas of subtle energy fluctuations known as vortexes but one can say that the entire Sedona is one large vortex of energy.

What are Sedona’s mystifying vortexes?

They are described as whirling masses of energy that affect people who come within a quarter mile of them!

The energy inside a vortex is similar to that inside every human being and when these two energies meet they create a resonance, described by people as a faint vibration. Those who experience this strange phenomenon, feel tranquility or rejuvenation.

Among other more tangible effects of being in the vicinity of the rocks, are strange lights that often appear in the area. However, the most fascinating are unusual sounds like that of bells or muted thunder coming from the rocks.

For now, the vortexes – usually called “electrical” or “electromagnetic” remain scientifically unexplained and tests have not yielded conclusive results.

However, EM field present at the Red Rocks of Sedona can have an effect on visitor’s psyche in form of hallucinations.

Among many theories, there is one suggesting that the area’s geology might amplify this effect on people. On the other hand, many don’t believe in any geological aspect because Sedona isn’t the only place on the planet known to produce the above-mentioned effect.

As we know, there are many similar places believed to be power points, such as Machu Picchu in Peru, Stonehenge in England, Easter Island just to name a few.

Our distant ancestors believed in such special places and felt connected with these power points.

While in Sedona at the Boynton Canyon vortex during the summer solstice, I felt a very strong presence and it made my hair stand on end. I took several pictures of the juniper trees at this vortex and discovered something very unusual when I got back to my hotel room to download the pictures… I captured spirits in some of my pictures. This is one of the photos: 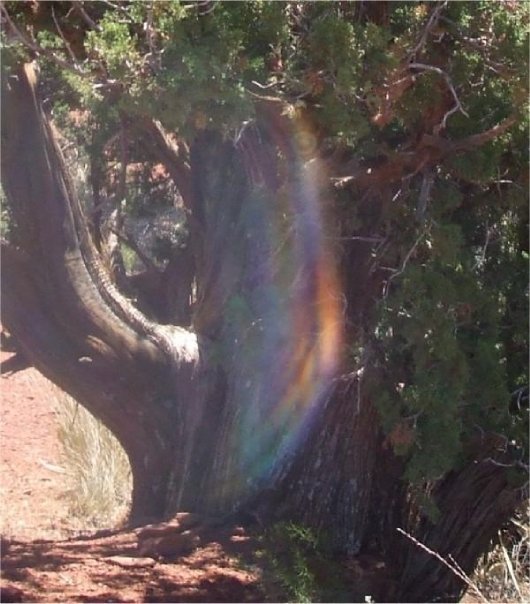 I zoomed in on this picture and saw this…notice the orb in the picture: 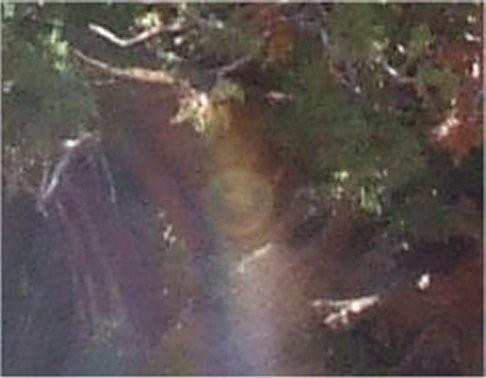 Upon zooming in on this orb, you can clearly see at least one face: 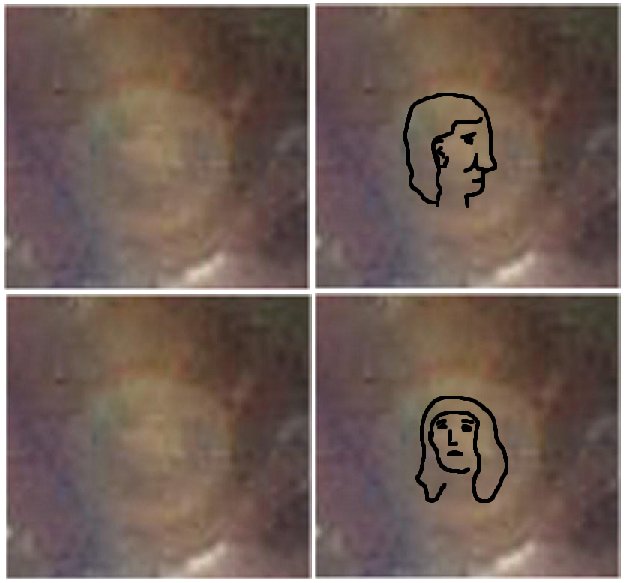 1) The right side profile of a person and

2) A woman looking to her right.

At the 11 o’clock position outside the orb, there is another face. The picture also shows a hand holding the orb in it’s palm. 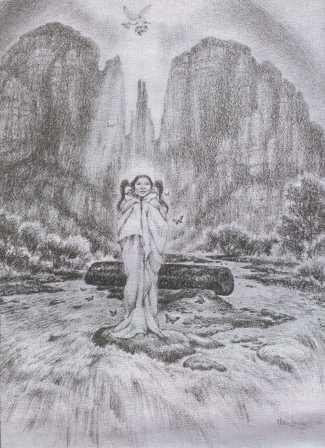 Komwidapokuwia, the Goddess of Boynton Canyon

I immediately became intrigued and started researching this vortex when I got home from my vacation. Boynton Canyon is said to be the shamanic crack between worlds. This largest vortex of Sedona activates a strengthening of one’s spirit bond with the earth, and renewing ones sense of purpose and direction in life.

The Apache believe this is the place where the first woman mated with the sun to start the human race.

I continued researching this and stumbled upon another web page. According to early records, first woman, Komwidpokuwia, old stone woman, originally came from Montezuma’s Well, where the Yavapai had been living. Before the great floods came, she was placed inside a hollow log, along with a bird and some food. Then they sealed the log with pitch so she would to float to a new place of safety to create the next world.

It is said that Komwidapokuwia landed in a high place in Boynton Canyon, where she lived in a cave. “She is the Goddess of the supernatural and medicine powers and is beautiful and as pure as a downy white feather… The medicine men, or anyone believing… may see her yet in a vision or dream and receive instructions, comfort and encouragement.” (Sedona Sacred Earth).

The Yavapai-Apache still hold a beautiful ceremony every spring right below that emergence cave. The picture of Komwidapokuwia looks very similar to the image of the woman in the orb.

I read an article in which Sedona resident Kathie Dame-Glerum stated, “There is a crystal in Boynton Canyon where the land folds into itself; solstices, equinoxes and planetary alignments give energy to the other vortexes.”

That was an interesting statement because this picture was taken on the day of the summer solstice.

As I continued to read about Boynton Canyon, I found out that it is surmised that Sedona is above an ancient Lemurian city, which could be part of why there are some many vortexes there. I went back there two days later and took some more pictures. Amazingly, another presence was captured on film again, this time it was in the shape of an eye or a swirling vortex over some cactus in front of a juniper tree at Boynton Canyon: 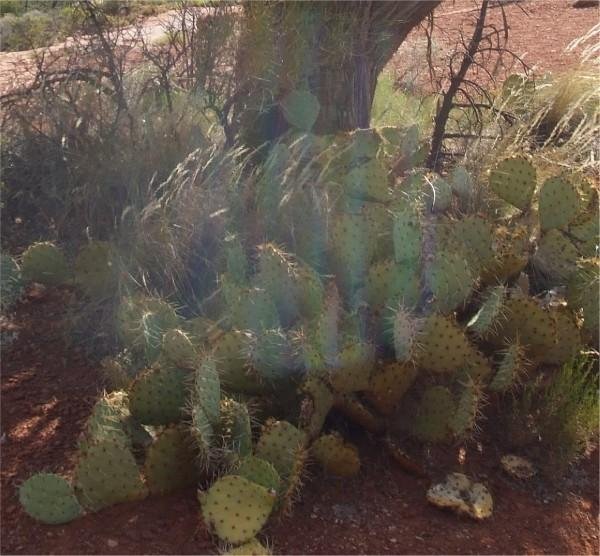 My friend who traveled with me is an intuit. We were both blown away by these photos. She stated she felt a warm, hugging presence in this area. The energy at Boynton Canyon, generally, shoots directly from your feet through the top of your head, thoroughly opening the crown chakra. The energy is also omnipresent where you feel it coming from all around you and not in one particular place or direction. There was one exception. When I went back to this spot, I meditated under the tree with the orb and was drawn into the tree while meditating. I’d like to think I was lucky in taking these pictures, but I don’t believe in luck. Things happen for a reason. What this reason is, I don’t know but I’m glad it happened to me.

A Hindu Priest Explains How Your Subconscious Mind Can be Reprogrammed

Factory Farming: Media Blackout Of The Thing That Will Cause Our...