Nature without man – what a strange mental picture. No kids playing in yards. No cars driving on the streets. No planes flying overhead. Nobody at the coffee shops or the national parks. No hustle and bustle. No farmers. No television. Nobody playing pokemon-go (what a tragedy, right?).

If you live in America, you’re probably proud of the fact that you can run a business, travel freely, grow your own food, shop ’til you drop and so on. Yet, on the other hand, corporate America has become quite overblown, stripping the soil of nutrients with all their toxic pesticides, creating chemical medicines that relieve symptoms of deeply rooted diseases, and of course processing food to the extent that it causes cancer, diabetes, infertility and Alzheimer’s. Then there are the animals in confined animal feeding operations (CAFOs) that suffer and are tortured until slaughter, when their meat is finally processed and sent to the “fast food” restaurants across the country. What can you possibly do to change all of this? Everything, that’s what. Keep reading. 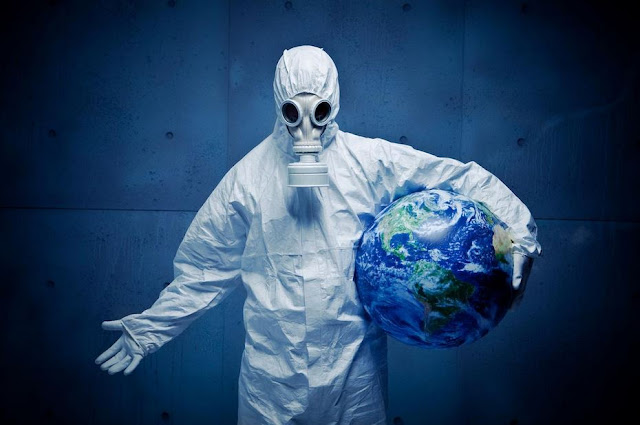 If we as individuals and as a team do not change our purchase habits, nothing will change; in fact, everything bad will get worse. The more corporations spread chemical herbicides and insecticides, the more animals will die. The more corporations, scientists and doctors manufacture, sell and over-prescribe toxic vaccines, pharmaceuticals, antibiotics and chemotherapy, the more humans will suffer needlessly at the hands of Western medicine. The more government officials ignore the safety of the infrastructure of nuclear facilities, the more chances are taken that could end the world “as we know it.” What would it be like – nature without man? Here are five ways humans could destroy civilization as we know it.

1. Kill off all the bees with neonicotinoids and other harmful pesticides: In 2016, the EPA released the very first risk assessment of neonicotinoid pesticides (aka neonics) which have been implicated in killing many pollinators, including butterflies, dragonflies and bees. Due to these unsafe chemicals that are already approved for widespread use in the USA, one fourth of America’s managed honeybee colonies were lost last winter. The EPA has no plan of action to limit or withdraw neonics from use. Why not? Most fruits and vegetables – more than 70 percent of human foods – will die off without the bees pollinating them. Period. Ready to eat grass all day?

There are about 20,000 species of bees on planet earth, including honeybees and bumble bees, and humanity may not last more than four years without them around. As a result of the use of chemical pesticides, the honeybee population in the U.S. is half of what it was at the end of WWII. Bees are dying at an economically unsustainable rate. Stop supporting chemical agriculture.

2. Genetically Modified Organisms, or GMOs: The globalists are using GMOs to kill off “undesired” populations. Cancer attacks every third American and for good reason. If you eat chemicals daily, then you get cancer. Bill Gates pushes GM food and GM medicine (vaccines) on Africans because he wants to reduce the population of the world by 5 billion over the next generation. Will you be part of the “problem” or part of the solution? Do you eat pesticide-laden food and take chemical medicine regularly? You better figure it out, and fast!

3. Superbugs (antibiotics fail): The overuse of antibiotics is running rampant in hospitals, doctors’ offices and CAFOs. Certain viruses called superbugs, like MRSA, are immune to antibiotics, and every day more antibiotics are becoming useless for fighting off infections. It’s time to look into natural remedies like oil of oregano, garlic and aloe.

4. Vaccines cause and spread diseases: Several vaccines, including the polio, measles and influenza shots, actually spread diseases as the injected shed the viruses. Will you be a guinea pig for Big Pharma and get experimental vaccines like Ebola, Zika, Swine and this year’s flu shot?

5. Nuclear radiation catastrophes: Fukushima radiation is leaking at alarming rates into the Pacific Ocean and reaching the shores of America. Are you iodine deficient? It’s time to stock up with natural protection.

What’s the solution to the impending world problems? Your dollar

Every dollar you spend represents a control factor that is way more powerful than you might ever believe. We the people can cripple evil corporate industries at any given moment in time if we all decide together to stop buying their products. This would include Monsanto, Bayer, Pfizer, Novartis, Merck, General Mills, Kellogg’s, Exxon, Walmart, McDonald’s … you get the picture. These monster corporations are rich for one reason, and one reason only; most people have no idea how destructive their agenda really is regarding health, humanity and the environment.

If people really knew how these companies exploit resources and labor while crushing sustainability nobody would spend another dollar on their food, medicine, gasoline or other services. Read alternative health and environmental news daily, and stay in the know. Realize that politicians and regulatory agencies are “selling us out” and furthering the destruction of our health, medicine and environment by taking money from corporate lobbyists who influence legislation.

Your vote in November goes a long way here. Remember that Hillary Clinton is the Bride of Monsanto and the Queen of Wall Street. Help U.S. states properly label GMOs, and be the smartest consumer you know. Every dollar you pull out of your purse or wallet represents change. Support local farmers, natural medicine and small businesses that use sustainable practices. The time is now.