Is it possible that early Christians believed in reincarnation? Although some may find this idea unbelievable, several Christian sources (including the Bible) suggest that many centuries ago, it was common to believe that one does not come to Earth just once, but various times.

In 1945, researchers discovered some early Judeo-Christian writings. Two years later, the world heard about the Dead Sea Scrolls, the discovery which changed biblical history.  The early Christians and Jews followed the teachings of Jesus – including the concept of resurrection. There are several examples of this found in ancient resources.

The oldest texts provide two concepts of resurrection: spiritual and bodily. The spiritual rebirth by the Holy Spirit is also known as being born again. A bodily resurrection of a human could also be called reincarnation. According to the first important father of the early Orthodox Church, Origen (185 – 254 AD), the soul exists before birth. He suggested that pre-existence was found in the Hebrew scriptures and the teachings of Jesus. 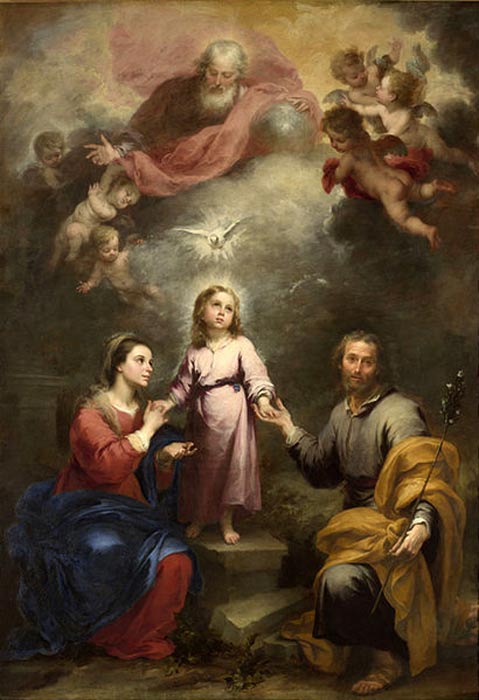 The Holy Spirit depicted as a dove descending on the Holy Family, with God the Father and angels shown atop, by Murillo, (c. 1677). (Public Domain)

Moreover, the writings of Clement of Alexandria – a disciple of the apostle Peter, suggest that his master received a few secret teachings from Jesus. One of them was related to the concept of physical and spiritual rebirth. The secret teachings confirm some writing in the Bible. There is a fragment which suggests that Jesus knew about reincarnation and past lives. Someone in the crowd apparently asked him: “What sign showest thou then, that we may see, and believe thee? what dost thou work? Our fathers did eat manna in the desert; as it is written, He gave them bread from heaven to eat. Then Jesus said unto them, Verily verily, I say unto you, Moses gave you not that bread from heaven; but My Father giveth you the true bread from heaven” – John 6:30-32

Jesus doesn’t refer to “your fathers”, but “you”, signifying that the story is connected with every person. In Deuteronomy 18:15, Moses said: “The Lord your God will raise up for you a Prophet like me from your midst, from your brethren. Him you shall hear.”

Once more, Moses doesn’t say “your children”, but “you”, indicating that it would be the same people to whom he was speaking that would see and hear the Messiah. According to many specialists in the Bible, there are many examples which promote the belief that reincarnation was well known and a fully accepted fact for early Christians. 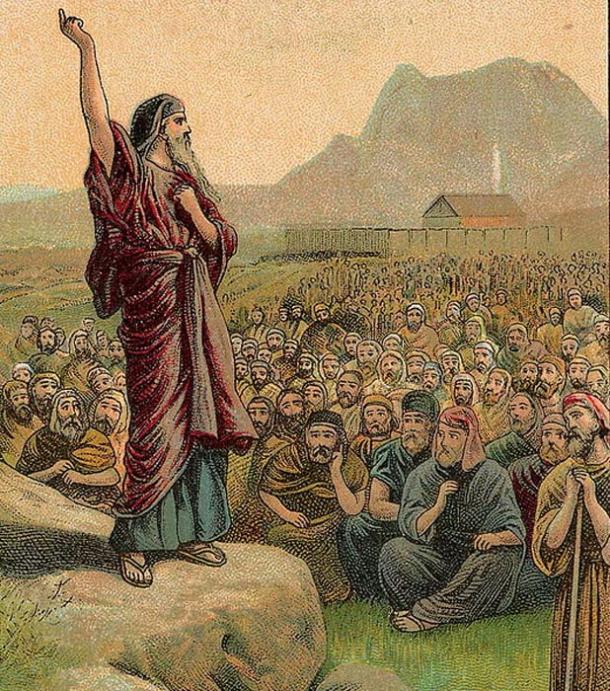 Moses Pleading with Israel, as in Deuteronomy 6:1-15. (Public Domain)

In the early medieval period, the doctrines of pre-existence and reincarnation only existed as Jesus’ secret teachings. In 553 AD this information was declared heresy at the Second Council of Constantinople. The Roman Church decided to destroy all the teachings which talked about it. The Catholic doctrine and the priests’ source of wealth could have been in danger if people believed that they would come back to life many times. The old knowledge faced the same fate as many ancient books by pre-Christian writers. The bishops were afraid of the knowledge which could prove that the institution of the Church wasn’t the only option to bring “eternal life” to people.

During the Middle Ages, the growing Christian religion faced new unexpected problems. With the rising number of priests, bishops, parishes, and churches the new religious structure needed more money. Due to these needs, they also invented celibacy, to allow the church to own everything what belonged to their priests.

Moreover, they decided to invent more terrible outcomes for Christian followers if they didn’t do what the bishops expected of them. In the ancient writings, there is nothing about asking the priest to ask God to release individuals from their sins…or even a place called Hell – where the people who broke God’s rules were said to go after death. 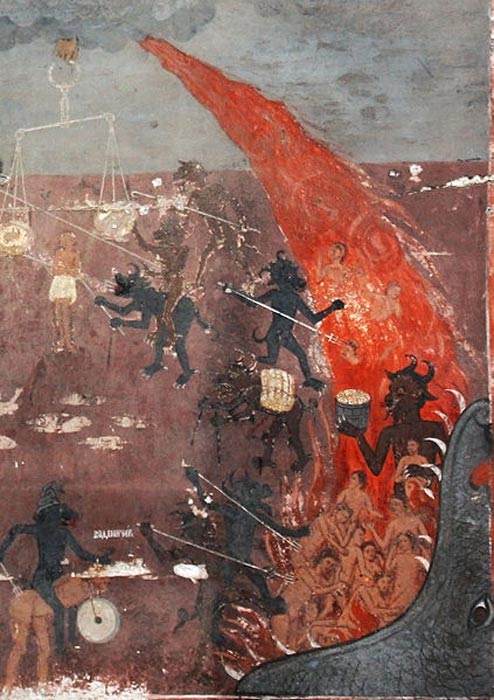 Another aspect which made the Church even more resistant in allowing the belief in reincarnation was related to the Crusades. During the Crusades, people were offering all they had to the Church and fought in the name of Jesus. The religious fighters may have been less intent to lose their lives for their religion if they thought they would be reborn in the future.

When the Inquisition started to kill people for crimes of heresy and witchcraft, the religious society remained silent. Although they were losing neighbors, friends, and family, the Christians believed that it was necessary to stay on the right side of the Church and Inquisition if they wanted to go to Heaven. A belief in the rules of karma and reincarnation wouldn’t have allowed the leaders of the Inquisition to hurt so many people. 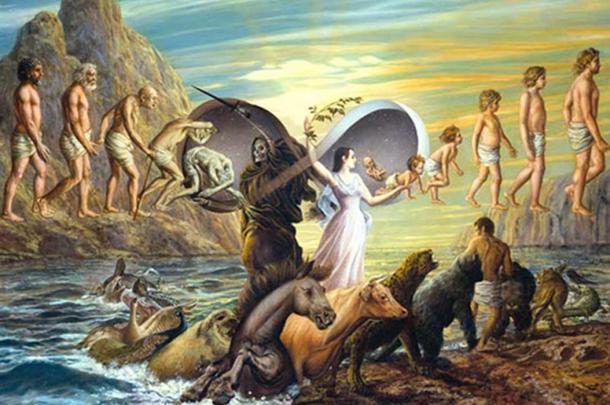 The Church’s Current Views on Reincarnation

Nowadays, some Christian churches say that it is possible that reincarnation exists. One of the most liberal of these organizations seems to be the Church in the USA. However, the belief in reincarnation is still more applicable to Buddhism or even New Age followers. The idea of reincarnation has never been fully accepted by the Catholic Church. If they would permit reincarnation as a belief, it would ruin all of the doctrine they had created over the years. It may not fully destroy Christianity, however, it would bring it back to the beginning, before the transformations the Church made. As long as people believe that only God can punish evil, the Church sees no need to apply the impersonal law of karma and other lessons which reincarnation brings. 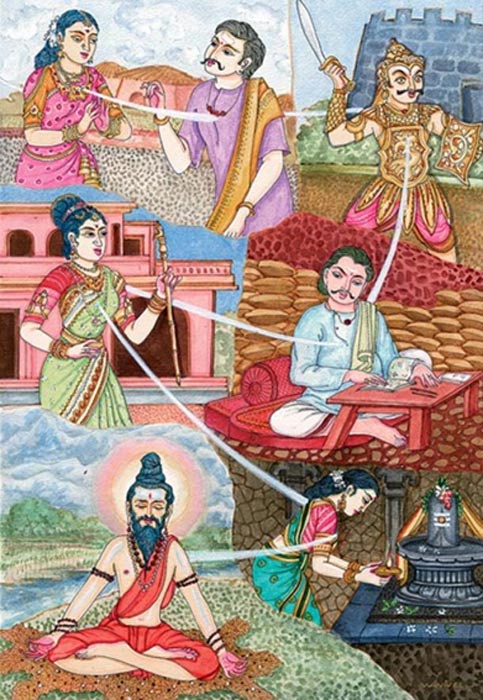 Reincarnation in the Bible by Kevin Williams, available at:
http://www.near-death.com/reincarnation/history/bible.html

May a Christian Believe in Reincarnation? By Abbot George Burke
http://ocoy.org/original-christianity/may-a-christian-believe-in-reincarnation/

Reincarnation and Christianity, available at:
http://www.comparativereligion.com/reincarnation3.html

Christians and reincarnation, available at:
http://americamagazine.org/issue/christians-and-reincarnation