Harper’s Canada Is in a Crisis of Epic Proportions: It Is Critical to Vote Him Out of Office Today

Indigenous peoples, the environment and basic human rights and freedoms have all been sacrificed under Prime Minister Stephen Harper’s government. 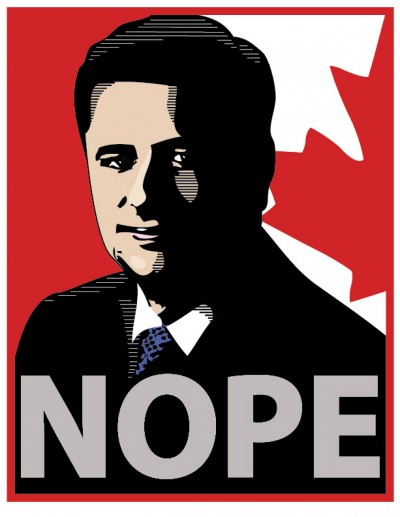 It is critical to vote Prime Minister Stephen Harper and his ruling Conservative Party out of office on Monday. Canada is in a crisis of epic proportions and if Canadians don’t take action soon, the damage could soon be irreversible.

Harper has become a triple threat to social peace and well-being in Canada which threatens the collective futures of Canadians and Indigenous peoples alike. In the name of empire building and his desire to become an economic powerhouse, Harper’s plan has focused almost exclusively on the extraction and sale of natural resources backed up by an aggressive law and order agenda to quell dissent. The results have been disastrous. Indigenous peoples, the environment and basic human rights and freedoms have all been sacrificed on the altar of economic growth.

Canada has lost its way. Canada is not a country made up of two founding Nations (English and French). Canada is a territory made up of many Indigenous Nations upon whose original sovereignty the state of Canada is entirely dependent. But equally as important is the fact that this territory is an eco-system upon which all human, animal, and plant life depends. Climate change, brought about by human activity concentrated in industrialized countries like Canada, represents the single greatest threat to both Canada and the planet. Our collective futures depend on how our leaders address this global crisis, yet Canadians have been distracted by a great deal of propaganda and misinformation making them believe all is well. The result has been a clear path for corporate-sponsored political parties and politicians to pursue their aggressive wealth accumulation agenda, which has benefitted primarily politicians and corporations at the expense of our future.

The multiple, overlapping crises in Indigenous Nations, the environment and the rapid decline of human rights and freedoms have been largely absent from the election debates. Harper’s Conservatives have been able to distract Canadians from these critical issues with red herrings like the niqab. Harper has everyone, including his political opponents, tricked into talking about whether or not a Muslim woman should be able to wear a niqab at a citizenship ceremony; instead of the thousands of Indigenous women and girls that have been murdered or gone missing in Canada. His party has the media focused on the alleged corruption of Indigenous leaders to distract from federal and United Nations reports that condemn the federal government for forcing First Nations to live in fourth world conditions without basics like clean water. While Harper’s party stacks up the largest number of political and criminal scandals in Canadian history, he distracts Canadians with threats of terrorism from Muslims and “rogue” First Nation leaders who are “threats to national security.”

It’s long past time to cut through the distraction and noise. Canada is killing our people and if we do not act now, more people will die. Since 1980, more than 1,200 Indigenous women and little girls have gone murdered and missing. Despite being only 4 percent of the Canadian population, Indigenous children make up 50 percent of all kids in foster care. Indigenous peoples are incarcerated at rates 10 times higher than the Canadian population. Under Harper’s regime, in the last decade the Indigenous federal inmate population has increased by 56 percent. Indigenous peoples live anywhere from 7 to 20 years less than Canadians. Many First Nations live without clean water and sanitation, access to adequate health care and education, and/or live in overcrowded housing or are homeless in the cities. The United Nations has called this “abysmal poverty” a crisis requiring Canada’s immediate action. In fact, they have said there is no greater issue facing Canada today than its continued human rights violations against Indigenous peoples.

Canada’s treatment of the environment is not much better. The single greatest environmental disaster in Canada has been Stephen Harper. In the last decade, he killed the Kyoto Accord, which was an important international agreement to reduce emissions that contribute to climate change. He enacted Bill C-38, which essentially gutted environmental assessments and empowered Cabinet to overrule any decisions. With Bill C-45, he left most of our lakes and rivers unprotected for the express purpose of removing red tape for industry. As a result, the tar sands pollute the rivers, cause rare cancers in local First Nations and is the fastest growing source of emissions in Canada. The ice is melting in the arctic causing starving polar bears, fish stocks could disappear in the next 35 years, bee colonies have been reduced by 30 percent (and 70 percent of world’s food depends on bee pollination) and most of the cutting done in our forests is still clear-cutting killing fish habitat and reducing our ability to breath clean air.

But none of this could be happening either to Indigenous peoples or the environment unless Harper had, at the same time, not introduced a rigid law and order regime meant to not only silence dissent, but criminalize dissent as an act of terror. Bill C-10 includes mandatory minimum sentences, which run counter to the Gladue decision of the Supreme Court of Canada which instructed courts to find alternatives to incarceration for Indigenous peoples. Harper’s plan to build more jails seemed to contemplate increases in incarceration rates and sent a chill throughout Canada. The RCMP and/or their local provincial police forces were called out every time Indigenous peoples staged peaceful rallies to protect their lands and waters from environmental destruction. This heavy-handed intimidation tactic was supplemented by the extensive and some argue, illegal surveillance of Indigenous peoples, environmentalists, student protestors, and civil society groups. Harper’s greatest fear – that Canadians and Indigenous peoples would come together and stand up for our collective futures – materialized in the Idle No More movement. Far from being the violent, nightmare scenario his advisors had predicted, Idle No More showed Harper that we care about well-being and justice for First Nations, the health of the environment and the protection of basic democratic rights and freedoms. Ironically, it was because of this peaceful social movement that Harper enacted Bill C-51 to criminalize dissent and make it an act of terror to interfere with infrastructure, sovereignty, territorial integrity, and the economy.

The fact that these issues were largely absent from the election debates show how disconnected political parties are from Canadians and First Nations. It doesn’t bode well for whichever party is elected on Monday. However, it is clear that irreversible damage will be done to Indigenous peoples, the environment and basic democratic rights and freedoms if Harper is not finally removed from office. It is therefore extremely important for Canadians to vote and get rid of the most destructive, aggressive and blatantly racist government this country has seen in recent years.

But the work doesn’t stop there.

Canadians have been educated to believe that their civic duty lies entirely in voting. In fact, voting is the very least effort a citizen can make. A democratic government is supposed to be a government of the people. It’s time the people took their power back and fixed Canada. The most important date in Canada’s future is not Oct. 19, but October 20 and the days that follow. Will Canadians stand beside First Nations and demand justice for our people? Will Canadians demand that environmental laws, processes, and protections be restored and enhanced with the assistance of scientists who are no longer muzzled? Will Canadians stand up for their own Charter of Rights and Freedoms and demand that basic democratic rights and liberties be restored?

We don’t need new solutions – the original Nation to Nation relationship envisioned a multi-national territory that would be shared by all – both the benefits and the obligations to protect it. This original treaty vision based on mutual respect, benefit, and protection could help refocus our priorities and shift our time, energy and resources to addressing the crises facing the plants, animals, and people who share this territory.

We have an obligation to honor the sacrifices of our ancestors and protect our future generations by acting in this generation before it’s too late.

Dr. Pamela D. Palmater is a Mi’kmaw lawyer and member of the Eel River Bar First Nation in New Brunswick. She teaches Indigenous law, politics and governance at Ryerson University and heads their Centre for Indigenous Governance.