Though countless forms of anthropogenic damage to the climate system have all taken their toll, now the full fury of weather warfare is being released on the US population. Paradigm disintegration is not coming, it is here, and will continue to unfold. So many will only choose to wake up when there is no other option, such is the nature of humanity. Weather cataclysm is unfolding all over the world, this is just the beginning. Could the power structure also be waging biological warfare in the flooded aftermath of countless extreme weather events? How much of the power structure’s agenda is yet unknown? How dire is the equation we collectively face? The latest installment of Global Alert News is below.

Ever more blatant and desperate actions of the power structure are increasing their vulnerability to disintegration from within. If we all pull together in the critical effort to pull back the curtain, we can accelerate this process. This effort must be borne by us all.
DW

Geoengineering Watch wishes to express our most sincere gratitude to Eva for her excellent climate engineering awareness booth at the WholeExpo, on September 9th and 10th, 2017, Durango, Colorado. 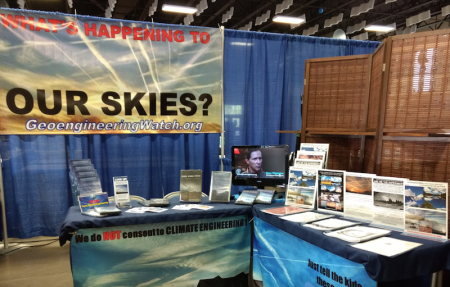 Next week’s (September 15th to 17th) GeoengineeringWatch.org outreach booth will be at the Marin Center / Exhibit Hall, San Rafael, California. The booth shown below is from the San Rafael even in July, 2017. My most sincere and continuing gratitude to the Gem Faire exhibition organizers for facilitating and setting up this very effective booth in every week’s Gem Faire location. The schedule for upcoming Gem Faire events is HERE. A geoengineeringwatch.org booth will be at all events, thanks to the steadfast support of Gem Faire.