Our world continues to change at a pace that exponentially exceeds anything ever documented in the entire history of the planet. Completely unsustainable artificial realities are keeping huge segments of population pacified for the moment, even while the rumors of global conflict grow. What is unfolding won’t seem real until it is. The latest installment of Global Alert News is below.

Engineering winter weather is one of the primary objectives for the geoengineers. By manipulating upper level wind currents and with patented processes of chemical ice nucleation for weather modification, the climate engineers are (and have been) cooling down the most populated regions of the US (backed by the most massive military industrial complex on the planet). This process fuels the continued confusion and division of the population in regard to the true state of the global climate. Much of the cooler air is, in essence, robbed from the Arctic by jet stream manipulation via ionosphere heater installations. What happens then? The most recent departure from normal high temperature map below paints a clear picture. The total meltdown of the Arctic accelerates, as does the mass methane releases occurring there from the increased heat buildup. If enough formerly frozen methane hydrate deposits release into the atmosphere, it will very soon be game over. This is not to blame all of our challenges on climate engineering, but mathematically speaking, it is the single greatest climate disrupting factor at this time. The dark red zones on the polar regions are a harbinger of a very grave future for us all (and then there is the collapsing ozone layer to consider, in which climate engineering is also a primary causal factor). 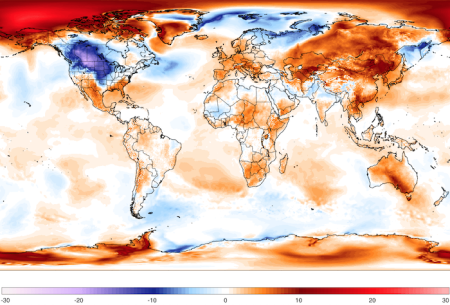 Attempting to make a difference for the better is a personal decision, it is a choice. No matter how great the odds are against us, we are not beaten until we decide to be so. If we stand together in the dedicated and relentless effort to sound the alarm and to awaken global populations, we may yet accomplish profound good. If we can expose climate engineering, we could stop it. If we can stop it, we would at least buy time. All of us are needed to do our part, share credible data from a credible source, make your voice heard.
DW

This week’s GeoengineeringWatch.org outreach booth is at the Del Mar Fairgrounds, Del Mar, California, and is shown below. My most sincere and continuing gratitude to the Gem Faire exhibition organizers for facilitating and setting up this very effective booth in every week’s Gem Faire location. The schedule for upcoming Gem Faire events is HERE. A geoengineeringwatch.org booth will be at all events, thanks to the steadfast support of Gem Faire.