How long will the masses continue to march to the power structure produced propaganda? President Trump has now fully revealed who he is. Like all the administrations before him, Obama, Bush, Clinton, and others, Trump is a prop in the global power structure play. The Syrian false flag event revealed much. The military industrial complex, as expected, is still pulling the strings of the presidency. Academia is finally being forced to admit that parts of the world will soon be uninhabitable. In regard to the global geoengineering assault, the New York Times stated that “Science Fiction May Soon Be Science Fact”. Not an admission of the truth, but inching closer to a glaring reality that cannot be hidden much longer. The biosphere implosion continues, a recent study states the current planetary changes are unprecedented in the last 420 million years. We are all in completely uncharted territory, where does this road lead? The latest installment of Global Alert News is below.

The sooner we abandon preconceptions of what we formerly thought would be, and fully accept what is, the greater our chances of positively affecting the immense challenges we collectively face by being more effective in the critical battle to sound the alarm. Make your voice heard.

Dane Wigington will be at the Geoengineering Watch informational booth at the GEM FAIRE event in Eugene, Oregon. Dane will be at the booth on the first two days of the three day event (1pm to 6pm on April 14th, and 10am to 2pm on the 15th). Free Geoengineering Watch informational materials will be available (including DVDs), and a display preview copy of the soon to be released book by Dane, “Geoengineering: A Chronicle Of Indictment”.
The GEM FAIRE show will be held at the Lane County Events Center, 796 W. 13th Ave., Eugene, Oregon. For more information click HERE. 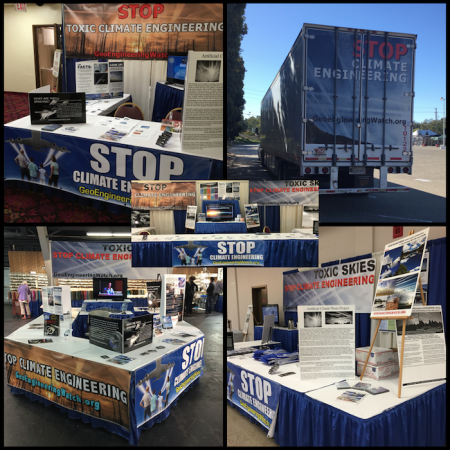 This week’s GeoengineeringWatch.org outreach booth is at the Washington County Fairgrounds, Hillsboro, Oregon, and is shown below. My most sincere and continuing gratitude to the Gem Faire exhibition organizers for facilitating and setting up this very effective booth in every week’s Gem Faire location. The schedule for upcoming Gem Faire events is HERE. A geoengineeringwatch.org booth will be at all events, thanks to the steadfast support of Gem Faire. 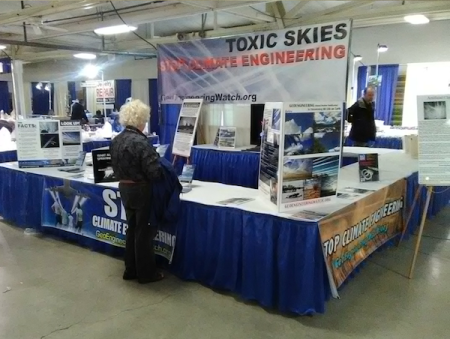 Why Is Glyphosate Sprayed on Crops Right Before Harvest?

Codex Alimentarius – The End Of Healthy Food, Minerals and Vitamins

How to Open Your Third Eye and Awaken Your Extrasensory Gifts

Ark of the Covenant : Yazhi Reveals its Meaning and Location – Cosmic Agency

Release the Muons! Physics Breakthrough Will Lead to a New Kind of Particle Collider

WHAT IS FIAT CURRENCY? WHAT IS MONEY?

One Humanity, One Planet, One World: Global Politics is Dehumanizing Mankind

Scientist concludes death is only an illusion, it is not real

How to Be a Producer In a Nation of Consumers