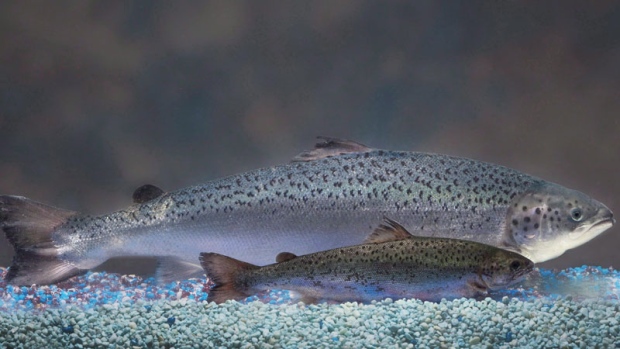 Health Canada and the Canadian Food Inspection Agency announced Thursday they had completed a scientific review of AquAdvantage’s salmon and it has passed the final regulatory hurdle for the farmed fish.

The fish was developed by U.S.-based biotechnology firm AquaBounty Technologies Inc. to promote rapid growth of the fish during early life, using a growth hormone gene from the Chinook salmon in an Atlantic salmon.

The company has one facility in Canada, in Bay Fortune, P.E.I., and a production centre in Panama.

Dave Conley, a spokesman for the firm, said in an email that it will be a year or more before the firm has any production of market-sized fish.

The agencies say in a news release the fish have met the key hurdle of being “as safe and nutritious for humans and livestock as conventional salmon.”

The regulators also said genetically modified foods are becoming more common every day and are a regular part of Canadians diets.

However, an alliance of environmental groups raised questions about the review process, arguing there wasn’t sufficient public input and — at the very least — the fish should be labelled.

“Canadians could now be faced with the world’s first genetically approved food animal, approved with no public consultation and no labelling,” said Lucy Sharratt of the Canadian Biotechnology Action Network.

Denise MacGillivray, a spokeswoman with Health Canada, agreed there is no formal consultation portion of the regulatory process, but said the review decision is on the website and available for the public to read.

“Since in this case there is no health risk identified, there is no requirement for mandatory labelling,” she said during a conference call.

Conley said in an email that the firm hasn’t made any decisions on labelling yet.

AquaBounty has said it plans to produce the salmon eggs in P.E.I. and grow them to full size in Panama, where they will be processed into fillets and shipped back to Canada for sale.

The process has drawn a campaign of public opposition and legal actions from environmental groups.

The Ecology Action Centre and Living Oceans Society say in a news release they’ve launched a court action against the federal approval in 2013 of commercial production of genetically modified fish eggs and fish, and that case is ongoing.

SLOW KILL : Why Are The Controllers Poisoning Us? Water & Air (Part I & 2)

January 9, 2016
Slow Kill – Why Are The Controllers Poisoning Us? Part 2: Air
Read more