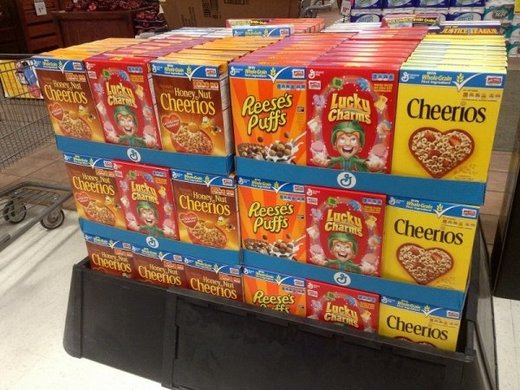 © Mike Mozart | Flickr
General Mills on Friday said it will start putting labels on all its U.S. products that contain genetically modified organisms as ingredients. The changes will hit grocery stores over the next several weeks.

American food manufacturer General Mills announced on Friday that it will begin labelling all its products in the United States that has genetically modified organisms as ingredients. The move was prompted by a new state law in Vermont, which requires companies to put such information starting July 1.

However, the company cannot label products for only one state without driving up costs for consumers, said General Mills Vice President Jeff Harmening, so the company’s response is to put up labels nationwide.

Still, Harmening said one thing is needed to tackle the issue of genetically modified food: a national solution.

“All sides of this debate, 20 years of research, and every major health and safety agency in the world agree that GMOs are not a health or safety concern,” said Harmening. “At the same time, we know that some consumers are interested in knowing which products contain GMO ingredients.”

Independent studies are damning. They show:

The Senate recently blocked a bill that would invalidate state and local efforts that require manufacturers to label products with genetically modified organisms. The bill would have given food makers the choice to disclose GMO ingredients.

Another spokesperson for General Mills said the company’s move does not indicate that it is backing away from its call for a national standard on GMO labelling.

“We have essentially run out of time,” said Mary Lynn Carver. “We have no other choice. Our supply system doesn’t work state-by-state.”

The Minneapolis-based company has added a search tool on its website, which will provide GMO ingredient information for its U.S. products.

Incidentally, General Mills is the maker of products including Haagen-Dazs ice cream, Nature Valley granola bars, Cheerios cereal, and many others. The labels will hit grocery stores over the next several weeks.

Meanwhile, the Grocery Manufacturers Association, an advocate against food labeling and a representative of food industry companies, called on the Senate to get back to work on the issue.

“One small state’s law is setting labeling standards for consumers across the country,” the association said. “This announcement should give new urgency to the need for action on a national law when the Senate returns from its recess in April.”

Other companies such as Chipotle Mexican Grill Inc., Whole Foods Market Inc., and Campbell Soup Co. have started requiring GMO labels or have abandoned the use of GMO ingredients.