(State of the Nation) How does one corporation — a mammoth British transnational corporation at that — provide so many critical services throughout the USA’s Military-Industrial Complex and yet very few have ever heard of them?

Related Suppression of Natural Cures and the Pharmaceutical Takeover of Healthcare — Part 1: Money

Source – State of the Nation

In view of its sheer size, scope of operations, and far-reaching penetration of both the American and British national security states, it’s inconceivable that SERCO has remained so conveniently under the radar for so many years.

Just how much “Bringing service to life” does SERCO do here in the United States?  The following is a truncated list of their affiliations in and around the U.S. Federal Government and Armed Services.  Their website is quoted as follows: “Skilled resources and a global presence to execute any CONUS or OCONUS* task”.

*OCONUS = Outside [the] contiguous United States

It is only by correctly understanding the true role that the SERCOs of the world have in the running of the planet that anyone can even begin to apprehend the enormity and complexity, pervasiveness and profundity of the Government-Corporate Complex.  Truly, the warnings of George Orwell’s 1984 have found their full manifestation in the real 800 pound gorilla that currently rules the realm — the entire planetary civilization.  As follows:  The Government-Corporate Complex Takes Complete Control Of The USA

“Serco is dedicated to providing military support in ways that matter most to our clients’ missions. The vast majority of our employees are embedded in military bases, working side-by-side with servicemen and women to deliver military support—real mission-critical and mission-support solutions.”

Now have a look at SERCO’s many ways of “Bringing service to life” throughout the USA.  The following list of agencies and departments within the U.S. Federal Government and U.S. Armed Services is by no means exhaustive where it concerns SERCO’s direct and indirect involvement.  There are, in fact, many other secret organizations and classified projects that are not shown below in which SERCO not only participates, but is also quite prominently configured in case claims of plausible deniability may be necessary to shield the US Govt and its employees.

Department of Housing and Urban Development

Department of Housing and Urban Development
Public and Indian Housing 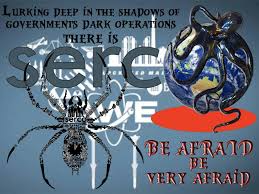 It is noteworthy that SERCO started off as a division of old RCA company.  As flows:

Serco was founded in 1929 as RCA Services Limited, a United Kingdom division of the Radio Corporation of America and initially provided services to the cinema industry. It changed its name to Serco in 1987 and has been a London Stock Exchange listed company since 1988.
(Source: Serco)

So the 64 thousand dollar question is how, and most importantly why, a British Corporation controls so many critical functions within the United States of America, as well as within many other key Western nations around the world?

There is only one answer: Because SERCO is a foreign multinational corporation, it can do things at its headquarters in Hook, Hampshire, United Kingdom, that a U.S. company could simply not get away with.

The best illustration of this fact of the U.S. government–U.K. corporate cozy relationship is the BP Gulf oil spill.  The excerpt below delineates the basic scheme that plays out across the planet 24/7, especially where plausible deniability or safe distance is needed for the U.S. Federal Government.

Well, not quite. You see, BP, as a foreign multi-national corporation, can do things in the process of exploration, drilling and extraction of oil that US-based companies can’t do. What and why, you may ask, would a foreign national corp (short for corpse) with a track record like BP’s be given so much latitude? How could they, of all oil giants, be the beneficiary of such permitting largesse, regulatory laxity and freedom of practice?

Well, first of all, they were permitted to drill at depths to which no one else could drill – legally – because of the mother lodes waiting at the tip of their humongous drill bits. In the instant case we’re talking at the very least 50 to 100 million barrels of oil. Also, by their convenient foreign corporate distance from the US Government, they were practically immune to various oversight regimes that are normally imposed on their US counterparts. Wink, wink (|) (|)
(Source: The BP Gulf Oil Spill: A Matter Of National Security?)

What the SERCO researcher should glean from this quite telling disclosure is that the U.S. Government reflexively outsources every single service or functions, dirty job or unsavory task that it needs to distance itself from.  In the case of conducting extremely risky and outright dangerous oil drilling in the Gulf of Mexico the globalists chose BP to do the dirty work.  In that particular instance it had everything to do with liability — financial and legal.   However, the primary reason for such an arms distance government-corporate relationship is the ‘necessary’ of buffer of plausible deniability.

SERCO is handed the job of serving a multitude of patently illegal contracts executed by the U.S. government.  They routinely perform some of the most shady services within the most corrupt sectors of the national security state apparatus.  Now the reader understands why they whitewash their corporate slogan/tagline “Bringing service to life”.  They sure do — they bring services that nobody else will touch because of their inherent threat to life.

Whose life?  Everybody and anybody involved with the SERCO ‘services’.  Yes, what they really do is that perilous to people and dangerous to property.  The link below provides some of the details to the convoluted but true back story of the highly mysterious disappearance of Malaysia Airlines Flight 370 … and the direct involvement of SERCO.

How was SERCO involved with the disappearance of Malaysia Airlines Flight 370?

Obamacare: A SERCO Contract that Controls the US Healthcare System

With this hidden knowledge it is now much easier to understand why SERCO was the recipient of a literal barrage of bad press right in the thick of theObamacare rollout debacle. 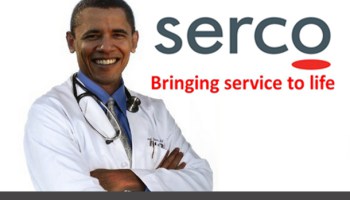 The headlines below are by purposeful design, not because SERCO screwed up.  Did SERCO really do the things that have been reported in these articles?  Maybe; maybe not.  Probably they did, however, just to confer street cred to their reputation of corporate corruption and irresponsibility.

Assume that they really are responsible for these unparalleled fiascos and then you will comprehend the strategy which has been used all along to make the taxpayer think that SERCO is just another greedy, incompetent government contractor.

No, they are not.

This image has been carefully sculpted over decades to convince (deceive) the general public that they are too incompetent and irresponsible to perpetrate the countless black operations which they carry out on a regular basis.  In fact, they have a very critical mission in the execution of some of the most highly consequential implementation plans having to do with everything from 9/11 to the Oklahoma City bombing, from FEMA to the Department of Homeland Security, from Obamacare to NSA surveillance and spying, from the Russian warplane shootdown to the Benghazi CIA gun-running operation, from the Syrian War to the arming of the Islamic State.

And these examples are only the least consequential; the others are so secret and highly classified that Hillary Clinton was forced to set up her own personal email and home server in order to privately communicate about the more [illegal, unlawful and illicit] serious business.

Yes, that’s precisely why she stonewalled the House Committee for years and was unwilling to turn over her emails … or even her server which was effectively the property of the State Department since it was used to conduct official government business.  Whenever and wherever SERCO is involved with the affairs of government, you know that there is something very, VERY wrong going on.

In reality SERCO is just one of hundreds of government contractors many of which perform similar services.  Just like the U.S. Armed Forces frequently outsource their security to firms comprised of prior military mercenaries, there are outsourcing companies for every service and product under the sun.   Hence the revolving door between the government and corporate sectors is now moving faster after than ever.

The more politically sensitive and/or militarily dangerous any particular mission is, the more firms like SERCO are utilized to do the dirty work… real dirty work.  Especially in cases like 9/11 and Sandy Hook, plausible deniability becomes the overriding factor.  This is exactly why the U.S. Government gave BP total control over the BP Gulf oil spill crime scene.  Not only were they a British multinational company headquartered in London, England, they could get away with criminal conduct that would have shut down an American company.

Final Point: Outsourcing the most repugnant and unlawful operations of government has been the primary way for keeping it off the front page for decades.  However, even the extraordinary rendition programs post 9/11 can be exposed when the right whistleblower wanders into the wrong place at the wrong time (actually the right place at the right time).

Let’s face it, when government-sponsored abductions and the extrajudicial transfer of those abductees from one country to another are perpetrated in order to illegally torture those individuals, the Government-Corporate Complex that supports these blackops places itself in serious jeopardy.  In this manner have the SERCOs of the world been put on notice.

It should be pointed out that controlling forces within the United Kingdom have quite deliberately infiltrated all the English-speaking countries of the world.  They each perform a crucial function in the implementation of the New World Order agenda.  They also play an integral role in artificially maintaining the fraudulent Global Economic & Financial System.

As the UK’s largest outsourcing giant, SERCO not only has control of every aspect of the USA, Inc, government and military, its franchises also include Canada and Australia.  The following link from their website indicates their corporate presence throughout Canada. http://www.serco-na.com/clients

[1] Meet Serco, the private firm getting $1.2 billion to process your Obamacare application

Serco to pay back £69m over fraudulent tagging contracts 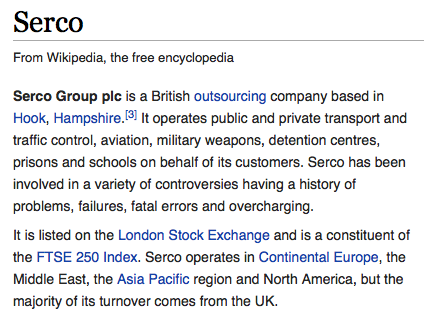 Originally written by SOTN and published at:
SERCO: A Corporate Octopus With Tentacles Wrapped Around The Globe

Stillness in the Storm Editor’s note: Did you find a spelling error or grammar mistake?  Send an email to corrections@stillnessinthestorm.com, with the error and suggested correction, along with the headline and url. Do you think this article needs an update? Or do you just have some feedback? Send us an email at sitsshow@gmail.com. Thank you for reading.